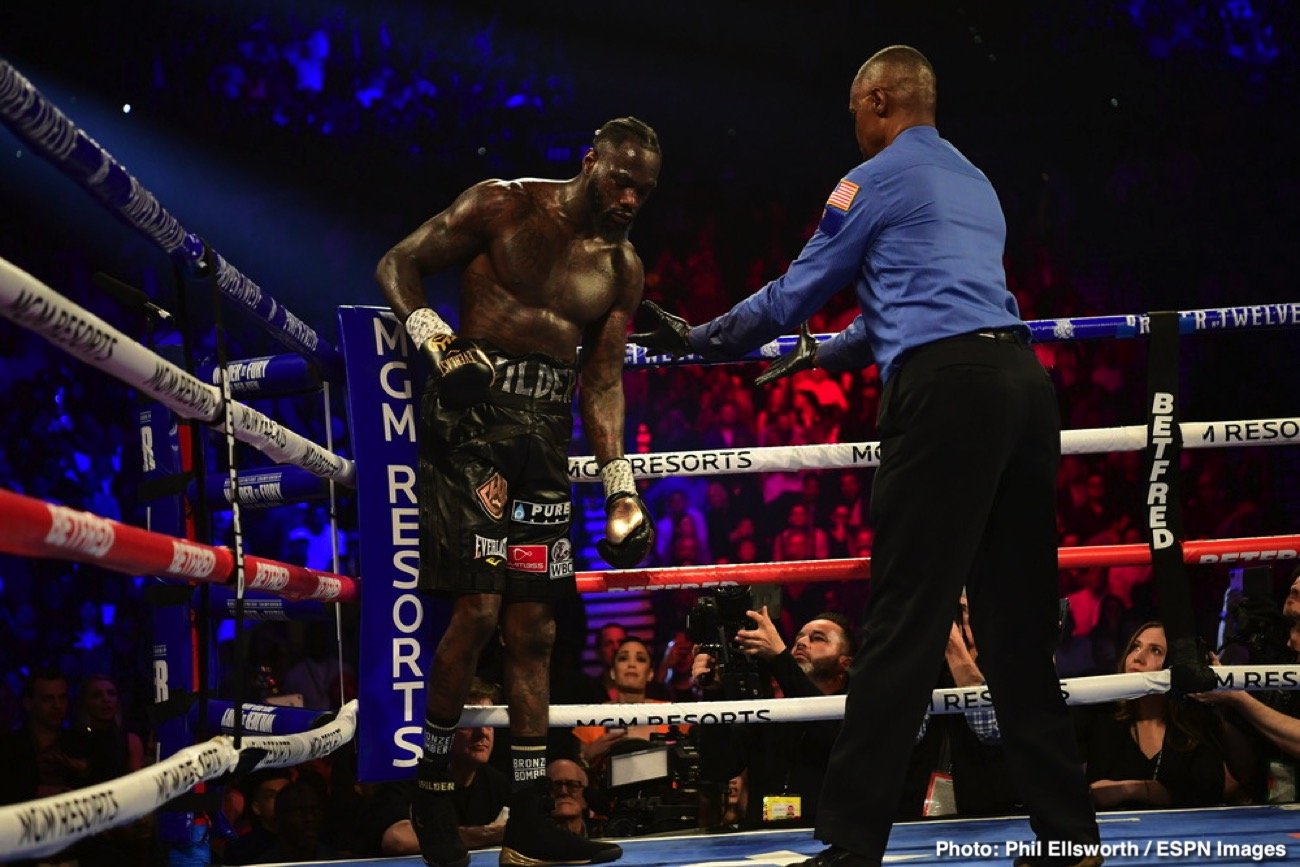 By Matt Lieberman: Andre Dirrell says he’s the one that told Deontay Wilder’s ex-trainer Mark Breland to throw in the towel in the seventh round in his last fight against Tyson Fury in February 2020.

Dirrell says he saw blood coming from one of Wilder’s ears, and his legs looked weak, and he had power on his shots. He felt that it was best to stop the contest so that Wilder could live to fight another way.

With his right-hand power gone, the only thing that Wilder could do was soak of oneway punishment. You can argue that if Breland didn’t stop it, the referee surely would have before long.

Most boxing fans believe Breland did the right thing by throwing in the towel. Fury had already dropped Deontay twice in the fight, and he was showing no signs of tiring.

It was basically Furyin working on a heavy bag, and he wasn’t going to get tired of hammering Wilder.

Wilder admitted that his right bicep was injured in the aftermath of the fight, and his legs and balance were gone. As a result, there was nothing for Wilder to gain by staying out there, taking punishment in a fight that he couldn’t win.

Wilder will get his chance to redeem himself against Fury next month in their trilogy fight on July 24th on PPV at the T-Mobile Arena in Las Vegas.

“It was me standing right there [before] the eighth round, telling Mark Breland to throw in the towel,” said Andre Dirrell to Fighthype on what led to Wilder’s coach Breland to stop the fight with Fury.

“You live to fight another day. He was taking too much punishment, and there was nothing he could do.

“If you looked out in the crowd, you would see one of the Charlos trying to wave it off, talking about stopping it.

“Usually, if you look closely at the fight, you can see someone veer off on the other side of the ring, talking about ‘wave the fight off.’ Meanwhile, I was in the corner in the last two rounds, telling Mark Breland to throw in the towel, and I do believe I had some influence in doing so.

“If you look at the main reason why Deontay Wilder got into boxing at 21 or 22-years-old, it was to be able to take care of his daughter.

“Can he do that now? Absolutely, he can retire, live a great life and take care of his daughter and whoever else he needs to take care of.

“But if he wants to come back stronger, we have to give him the opportunity to do that as well. You don’t want to take too much unnecessary punishment if you don’t have to,” said Dirrell.

The late confession by Dirrell somewhat lets Breland off the hook for him choosing to stop Deontay’s fight in the seventh round. But it’s too late now, though, because Breland has already been fired by Wilder and replaced by Malik Scott.

“One of the three or four reasons, Deontay had no legs [by that point in the fight],” said Dirrell. “He told us that his suit was too heavy.

“And I do believe that affected him, and that’s a reason to say, ‘Let’s throw in the towel, man. We’ll go get him next time.

“You’re getting punished; your ear is bleeding.’ That’s the main reason I stepped up to the ring corner because his ear was bleeding. I didn’t know what that was caused from.

“That’s not a normal situation; I’ve never seen that outside of Deontay Wilder. He had no legs to shoot off power shots.

“Absolutely, everything was working against Deontay Wilder in that fight. If you don’t believe me, go watch it again and tell me he could have landed one of his big bombs, no.

“It’s highly unlikely. Do we cut it off here and get your mind right and get you back in the gym and try to Tyson Fury? Yeah, that’s the game plan. We live to fight another day.

“So the odds were against him in that fight. It just came to the elements, so let’s just reset and do it again.

“I do believe he can do it, I really do, but he’s going to have a job ahead of him. Like I said, if he can’t use his boxing ability, he won’t get the victory,” said Dirrell.

Wilder’s bloody earn looked bad, and you got to wonder if Breland had taken a good look at it during the fight to determine the cause. Fury’s clubbing punches were landing on both sides of Wilder’s head on his ears, which is what caused the problem.

Unlike most heavyweights, Fury throws slapping shots to the sides of his opponent’s heads rather than straight.

A lot of the time, Fury’s punches land on the ears of his opponents and quite frequently to the back of their heads.

Despite having very little power, the clubbing shots Fury throws to the sides and back of his opponent’s heads make him dangerous if you allow him to stand in close to land those shots.

Wilder made the mistake of allowing Fury to back him up against the ropes and club him at will with his punches.

No guilt about Breland losing his job

“No, not at all, I’d do that s*** a million times over,” said Dirrell when asked if he feels guilty that Breland lost his job because of him choosing to stop the contest in the seventh round. 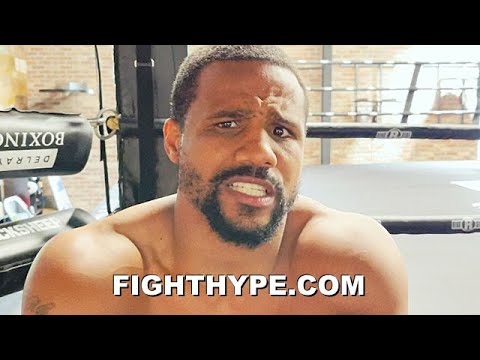 “He’s strong enough, powerful enough to come back and get the job done. So let’s do it again. 99% of the champions out there have losses on their records.

“Some of the greatest of all times have losses on their records. After that loss, we can see who you really are. Deontay is powerful enough to get the job done.

“I don’t feel guilty at all; I would do it 1000 times over. Mark Breland has to fall back and let Deontay be Deontay right now.

“Deontay is in the wrong place, the wrong headspace, I believe. Some years down the line, he’ll possibly come to his senses, and he and Mark can have a talk.

“Will they bury the hatchet? More than likely. Mark will have to sit back and wait for that day. That’s not something he should approach. No, I don’t feel guilty at all.

“We just have to let that man live out his life and his career the way he wants to, man,” Dirrell said.

It appears that Dirrell misunderstood the question that was being asked of him about whether he feels bad for Breland about him losing his job.

Assuming that Deontay’s sole reason for firing Breland was because he was unhappy about stopping the contest in the seventh, Dirrell would obviously have played a part in what transpired.

Of course, it’s hard to imagine this being the only reason why Wilder let Breland go. If things were going well and Deontay was close to Breland, it’s not likely he would have let him go.

Perhaps Wilder was considering making the move of letting Breland go for a while now. What happened during the fight might have been just a handy excuse. You never know.

“No, I haven’t,” said Dirrell when asked if he’s spoken to Wilder. “I would like to. From what I hear, he don’t like the Dirrell brothers right now. 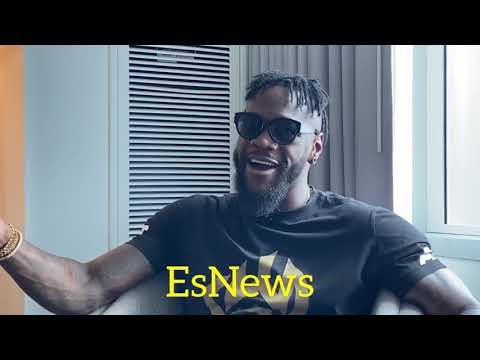 “Will I try to approach him? Probably not because I already know how he feels about the situation. If we never speak again, oh well. Do I believe I saved him from severe punishment?

“Absolutely.  So I don’t feel no type of way, and I’m not going to try to bury the hatched because I looked out for your safety.

“It’s just a sport. I know he wants to die with his great legacy, but the legacy is even greater when you come back. We’ll leave it at that.

“However he feels about it, I just wish him the best, and I just want the best for him. I feel like I did the right thing.

“Deontay, he’s been kind of a sloppy fighter, but he’s been coming together really well, he really has. He’s been controlled and under his feet a bit, but that fight [with Fury], he lost it all.

“He was off-balance, he had no leverage, he had no way of setting up power shots, he was getting backed up the whole entire fight.

It would be a bad idea for Dirrell to approach Wilder right now with his confession about him being the one that told Breland to stop the fight.

If Wilder still has things twisted in his head, believing that he lost to Fury because of a conspiracy, he won’t be receptive to what Dirrell has to say to him about his reasons for telling Breland to halt the fight.