Demetrius Andrade to fight on December 6th or 13th, possibly against one of the Charlo brothers 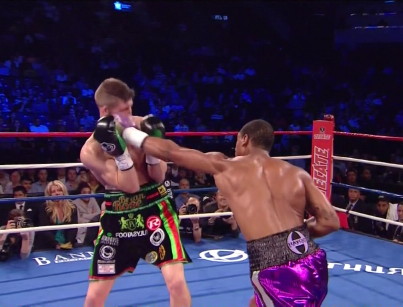 By Jim Dower: Unbeaten WBO junior middleweight champion Demetrius Andrade (21-0, 14 KOs) will be back in action on December 6th or 13th in a fight on Showtime rather than HBO, according to Dan Rafael of ESPN.

Andrade, 26, will be moving over to Showtime to get dates, fights and money against possibly one of the Charlo brothers. Andrade has been fighting on HBO lately, but after a fight against Matt Korobov fell apart over money, Andrade decided to go in another direction with his career.

Jermell or Jermall Charlo would be excellent opponents, whichever one Andrade picked for the fight. It would be a significant bump up from the last guy Andrade faced in Brian Rose last June. That was a really bad mismatch with Andrade having his way with Rose for six rounds until finally knocking him out in the 7th.

In his fight before that, Andrade defeated Vanes Martirosyan by a 12 round split decision to win the vacant WBO junior middleweight title last year in November. While the judges scored the fight a split decision, it was pretty clear that Andrade had done more than enough to deserve the win in that fight.

With Andrade going to Showtime, it’ll open up the possibility of him fighting a lot of different guys. He obviously won’t be able to get a fight against the likes of Saul “Canelo” Alvarez, Gennady Golovkin or Miguel Cotto, but then again those fights were really available to him at this stage in his career.

Andrade is too dangerous for his own good right now, so he’s not going to be able to get the bigger names to step in the ring and fight him. It’s going to take him a little while before he gets to that stage. Beating the Charlo brothers one after another would be a good start for Andrade. He could then target someone like Erislandy Lara, James Kirkland and Carlos Molina.

« Floyd would beat Pacquiao? Why?