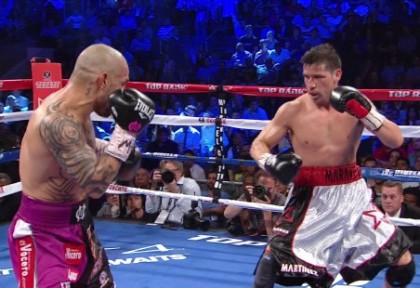 By Chris Williams: Jeff Mayweather says that trainer Freddie Roach hasn’t made any real changes to Miguel Cotto at all, and that the reason why he beat WBC middleweight champion Sergio Martinez last Saturday night was more of a situation of Martinez not being 100% after coming off two knee surgeries and a long 14 month layoff rather than Cotto being a rejuvenated fighter because of Roach’s training.

“Everyone thought that Martinez would win based on him coming back [from the injuries] 100%, and obviously he didn’t,” Jeff said to Hustleboss.com.

It’s impossible to disagree with what Jeff is saying here. Martinez was hobbling around the ring like he had a load of gravel in both of his knee joints for the Cotto fight. Martinez looked like was walking on a marbles around the ring all night long, and it’s very difficult to believe that he was 100 percent for this fight with the way he was moving.

When you compare this fight to the first 11 rounds of his fight against Julio Cesar Chavez Jr in 2012, it’s like watching someone else entirely. Sergio’s legs looked so much stronger, quicker and he had a bounce in his step when he moved around the ring in that fight. Against Cotto, Martinez looked he was walking over 9 miles of bad road.

When told that Cotto is a changed fighter under Roach, Jeff said “I think that’s a joke. You can’t change a guy that’s been fighting all these years. He may have had a little bit [of success] but he hasn’t changed the fighter.”

From my birds eyes view of the fight, I thought Cotto looked like the same fighter he’s always looked in each of fights during his career. There was absolutely zero change at all. He threw his left hook just as much as he always had, but the only difference is that he had a guy in front of him with legs that didn’t look strong. Martinez’s trainer Pablo Sarmiento even expressed the obvious after the 9th round by telling him that his knees weren’t there for him. They weren’t working for him.

Jeff thinks that Roach and Bob Arum are saying that they think Cotto can beat Mayweather simply because they’re looking to get a money fight between them. He doesn’t believe that they actually think Cotto would do any better in a rematch.

« Mayweather is highest paid Athlete in the world, says Forbes