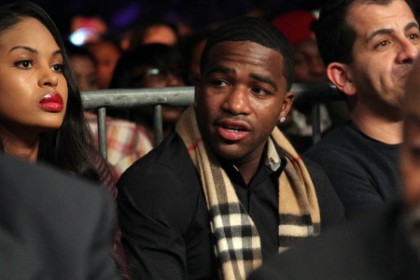 (Photo credit: Tom Casino/Showtime) By Dan Ambrose: The WBC has finally decided to strip Adrien Broner of his WBC lightweight title due to him failing to defend it since February of 2013 when he beat Gavin Rees. With Broner now showing any signs that he plans on defending the title the WBC chose to strip him of the belt. But here’s the strange part: Instead of letting the #1 WBC contender Daniel Estrada fight for the vacant belt against the interim WBA lightweight champion Omar Figueroa (22-0-1, 17 KO’s), the WBC decided to give the title belt to Figueroa outside of the ring.

That makes things really easy for Figueroa because he didn’t have to take any risky fights to get the title belt. After the war that Figueroa had in his last fight against Nihito Arakawa in July of last year, I bet Figueroa is happy he doesn’t have to fight for the title because there’s no telling how he’d have done if he had to fight anyone good right now and fight another war.

Figueroa, 24, will be making his first title defense on March 8th Richardo Alvarez (23-2-3, 14 KO’s) at the MGM Grand in Las Vegas, Nevada. Ricardo is the older brother of Saul “Canelo” Alvarez, and he doesn’t have the advantages that Canelo is in being heavier opposition. Ricardo will likely get taken apart by Figueroa, and either stopped or beaten up to the point where he’ll have wished that the fight were halted.

Dan Rafael of ESPN said this on his twitter: “1 other thing about wretched WBC rankings: Broner no longer listed as 135 titlist & Figueroa elevated from interim. #boxing #wbcisdisgusting.”

Broner appeared to be holding onto the WBC lightweight title as a backup plan for him in case things didn’t work out in the welterweight title. But I guess Broner decided he’s be better off staying the course in the 147 lb. division. It’s very possible that Broner could wind up regretting not moving back down in weight to continue to defend his WBC lightweight title against smaller guys that him. If Marcos Maidana beats him in a rematch then he’ll have wished that he moved back down.