Fury says Haye was having problems with sparring partners 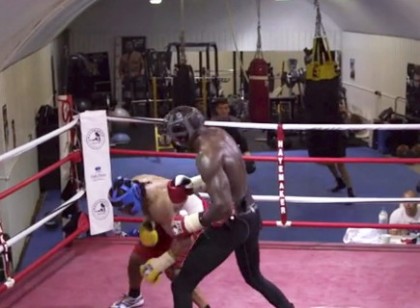 By Scott Gilfoid: Tyson Fury (21-0, 15 KO’s) has his own theory for why former WBA heavyweight champion David Haye (26-2, 24 KO’s) pulled out of their previously scheduled fight for last month due to a cut over his left eye. Fury thinks the cut wasn’t a legit one, and that he heard that Haye was getting beaten up by his sparring partners in training camp.

Deontay later said him and other sparring partners were really working Haye over to get him ready for the Fury fight. They hadn’t been taking it easy on much smaller cruiserweight sized Haye at all.

In the sparring video, you could see Haye’s body being moved around each time Deontay would land one of his clubbing right hand shots, and the last part of the video showed Deontay continuing to club Haye with right hands while he stood up against the ropes trying the best that he could to cover up from the 6’7″ Deontay’s huge blows to the head.

Fury told I Film London “I don’t think it’s a genuine cut. Why would you be sparring 1 week before the biggest fight of your life? Because he [Haye] was having a terrible camp. Things were wrong…I heard he was being done-in in sparring.”

It looks like one of Haye’s sparring partners must have leaked the news of what was going on in the sparring sessions to Fury. It wasn’t Deontay. The only thing that Deontay said was that him and the sparring partners were working Haye hard and punishing him to get him fully prepared. Fury can’t be talking about that.

It has to be one of the other sparring partners that spilled the beans about what was going on in Haye’s sparring sessions.

I had a feeling that something wasn’t right when they released the video of the sparring sessions to show mainly Haye doing good stuff. With the huge heavyweights that Haye had working partners in Deontay, Alexander Dimitrenko, and Mariusz Wach, it was only logical that these much bigger guys were giving Haye problems.

Haye had bulked up in weight to deal with the bigger size of the sparring partners and Fury, yet he was still getting moved each time Deontay would land a big shot. It had to have been the same when the big punching Wach was nailing him. The 6’7″ Dimentrenko has respectable power as well, and I wouldn’t be surprised if he was really giving it to Haye as well in the sparring sessions.

I don’t know what would change in Haye delaying the Fury fight, if that’s what he did. Haye can delay the fight another 4 1/2 months, but he’s not going to have super heavyweight size. You put Haye back in with those mammoth sparring partners, and it’s going to be tough for him because he’s a really just a pumped up cruiserweight at best.