The Madness of Tyson Fury: The Future King of Heavyweight Boxing? 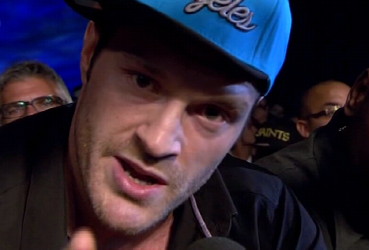 By Billy Bogan: Tyson Fury, love or loathe him, is by far the most entertainingly bizarre character to come out of British boxing since Chris Eubank Senior. Fury’s record is excellent on paper, but so severely padded out at present that it’s hard to judge how good he really is… or how good he will become.

He is an enigma of sorts. The first thing most boxing fans saw of Fury was a fat and out of shape kid bigging himself up, but not producing the desired performances to match. He was undeniably clumsy in his approach and he didn’t look like a future Heavyweight champion at all. In fact I was convinced back when I watched him defeat a little known Northern Irish fighter called Scott Belshaw that the big man from Manchester would be beaten soon enough. But, like so many other fight fans, I was wrong.

For such a big man Tyson has been taking baby steps through the ranks. His first victory of note was against an out of shape, but undefeated Dereck Chisora. Fury impressed pundits with the control and maturity he showed in a bout that most thought he would lose. It wasn’t as though Fury was in top condition himself for that match up either. He was also inexperienced and hadn’t been in with anybody similarly as hungry for success before. He took a ‘Klitschko-like’ approach to that fight and used his reach and physical size advantage to break Chisora down. Fury showed a big heart to maintain his standard for 12 hard rounds and won convincingly in the end.

The baby steps have stopped now though. David Haye is a massive leap up in class for Tyson Fury and his fans, myself included, are nervously aware of this fact.

Tyson Fury, who turns 25 next month, is currently undefeated and that is by far his biggest selling point to the boxing neutrals. Until a fighter is shown up by a better boxer they will continue to convincingly ooze confidence and remain a dangerous live opponent for anybody they step into the ring with. Perhaps Fury’s high confidence levels are based on his last fight, which was also against a natural Cruiserweight in Steve Cunningham.

But for me the match up with David Haye seems a little bit crazy at this stage in Fury’s fledgling career.

Then again Tyson Fury exudes madness at all times- in and out of the ring. Not many orthodox boxers would choose to fight southpaw for an entire fight, but Fury and his camp did just that against Belfast’s Martin Rogan. Not many fighters are so outrageously vocal on social media sites as they are on camera, but Fury is. His live on air rant aimed at fellow British Heavyweight David Price was entertaining, as are his twitter posts, but it’s clearly just a way of creating hype around himself. So if that is the method to his madness then it has been working for him so far.

He does show such a lack of respect sometimes, but on other occasions he will completely contradict himself. He has shown great regard towards the Klitschko team when talking about the brothers in the past, but he has even launched into a tirade against them on occasion. It has taken a long time, but it looks like fight fans are coming around to this curious aspect of Tyson’s nature.

There is a tongue in cheek humour to Fury’s commentary on himself and his opponents which people are beginning to understand and appreciate. He is bizarre and aloof at times, but clearly understands that boxing is about entertainment. His outlandish claims are all a part of building the type of persona that the public can willingly consume. So far he has been pretty successful at maintaining a decent level of media hype around himself, but he needs to continue backing it up in the ring to become a regular box office fighter.

Right now he is at a crossroads in his career and he will need to be much better than we have ever seen him if he is to beat David Haye. Defeat in this bout wouldn’t end his career because of his young age, but it would seriously dent his future prospects. He is receiving a large sum of money for this fight and for Fury that will be important to an extent. Like every boxer, Tyson Fury pays the bills by fighting and this is a promotion of sorts. However, boxing success isn’t measured by how many big pay days you get- it’s about winning world titles. Fury needs to be realistic whilst he matures if he is to ever achieve that goal.

The giant Mancunian has admitted himself that his work ethic was all wrong in the early stages of his career and that’s evident if you look back at the unfit and shapeless Fury wobbling around the ring clumsily swinging at his opponents seemingly desperate to make a connection to end the bout. His fitness, footwork and physique have all improved massively since then though.

Despite his size, Tyson Fury’s physique has not yet fully matured and undoubtedly if he uses his potential we will see a much stronger fighter still as he reaches his late twenties and early thirties.

It’s hard not to enjoy the old fashioned and strangely disrespectful fighting spirit that Fury displays prior to his matches. He will say things which are initially alarming, but that is a part of who he is. He isn’t as eloquent as other fighters, but he always gets his message across loud and clear. If he is indeed lacking in any natural talent he certainly isn’t in will and desire. He is a Jekyll and Hyde character who enjoys making a scene- which is great for the sport. People wouldn’t watch in the numbers they do if he said nothing at all.

Recently he has gained a lot of support in Britain and Ireland and if he defeats David Haye he will instantly become very popular around the globe too. Most importantly though, he will be confirmed as a major threat to the top Heavyweights- Wladimir and Vitali.

Whether he can win against Haye is the big question. As it was before his bout with Chisora, many boxing experts are giving him little or no chance whatsoever of winning this fight. Given his record that is entirely understandable.

But there are murmurings beginning to increase in volume suggesting that Fury is too big a boxer for Haye to take down easily. Granted, Haye won his Heavyweight title from an even bigger man in Valuev, but Fury does have more boxing ability. If he uses his size and reach advantage in a similar way that Wladimir Klitschko did against the Hayemaker then that is probably his best chance of victory on the night. If he does choose to engage openly with Haye then he will probably lose, but it will make for an exciting fight while it lasts.

If Tyson Fury wins his next fight he will open the door for a chance to go on and steal the Heavyweight crown, but that is still a big if with David Haye in the way. Until that battle is fought long may the madness continue.

« Roach: I want Mayweather to step up and face Pacquiao