Abraham vs. Stieglitz 2 next Saturday night, March 23rd in Germany 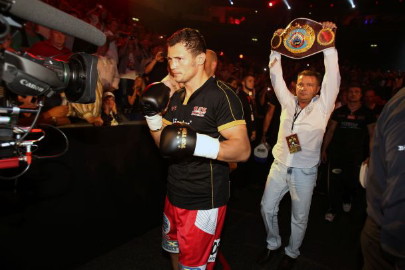 Abraham, 33, already convincingly beat Stieglitz by a 12 round unanimous decision last year by the scores of 116-112, 115-113 and 116-112 last August, but we’re seeing a rematch because Stieglitz had a rematch clause in his contract.

If he get the job done this time, then that’ll likely be all she wrote until he works his way back to another title shot the hard way or if Abraham decides to fight him in an optional title defense after he defends against his mandatory challenger George Groves.

It’s hard to see the Abraham-Stieglitz 2 fight being any different from the first fight because Stieglitz doesn’t have the size to do much against the stronger Abraham. Unless Abraham gasses out in the first six rounds, we’re not likely going to see an upset.

Stieglitz’s only chance of winning the fight is to stay on the outside the way that Andre Dirrell, Carl Froch and Andre Ward did against him and use his jab to do most of his work. Abraham is pretty easy to out-box if you stay away from exchanges with him.

Last time out, Stieglitz didn’t follow the blueprint created by Dirrell, Ward and Froch, and instead he chose to slug with Abraham. That didn’t work out well, as Stieglitz took a beating and ended up losing the fight.

Abraham has a bad habit of just covering up with his high guard to block shots and rest. He’s still fighting for the full three minutes of every round, and focuses mostly on just trying to steal the rounds in the last 20 seconds.

In Germany, the judges give Abraham rounds even though he’s just covering up and taking shots, but that same kind of fighting approach likely wouldn’t work in other countries where judges expect the fighters to be working hard for three minutes instead of just resting the way Abraham does.


« Judah-Garcia: Zab gets another crack at a title