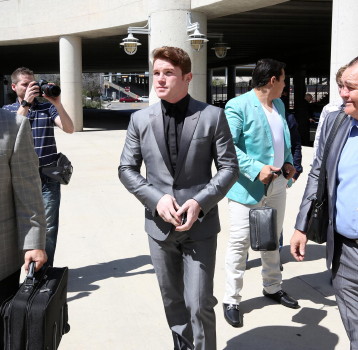 (Photos: Stephanie Trapp/SHOWTIME) By Dominic Sauboorah: We are in for a treat this year with the fights being displayed and here they are:

Nonito Donaire vs. Guillermo Rigondeaux: This fight is a real tough one to call. You’ve got one of the best pound for pound fighters in Nonito Donaire, defending his WBO strap against arguably the best amateur boxer ever in Guillermo Rigondeaux, defending his WBA strap. Donaire will have the obvious size advantage; however Rigondeaux is a tricky customer with phenomenal defensive skills. He’s also a south paw; therefore Donaire may find it hard to land his punches against the slick Cuban. Nevertheless this fight is a genuine pick ‘em and a real good match up put together by Bob Arum. Both have speed, athleticism and power, should be a real good fight.

Saul Alvarez vs. Austin Trout: A fight between two undefeated world champions who are regarded as the two best in their weight class. A fantastic combination puncher against all round good boxer. Saul Alvarez has received a lot of exposure by Golden Boy and for the first time in his career he steps up his level of opposition as he takes on the proven and slick Austin Trout. Many people didn’t think this bout would be made, due to the massive risk that this has for the young Alvarez, but fair play to him for stepping up to the plate and taking on a real tough test. Alvarez has done pretty much nothing wrong in his career, beating whoever’s been put in front of him and every time he’s done it in style. Austin Trout however has had to work bit by bit to get where he’s at now. He’s fought fighters on their turf from all over the world and has managed to come out on top; one of those fights was against Saul’s brother. Last year he put on a masterful display in completely out boxing Puerto Rican legend Miguel Cotto and in the process retaining his 154 lb belt. This should be a great fight and even Oscar De La Hoya stated how it’s a fight that no one can say with any certainty who’s going to win.

Carl Froch vs. Mikkel Kessler II: Had to save the best till last. This is easily, as of now, the biggest fight of the year. Their first fight was an absolute barnstormer and 3 years later it’s still pretty much impossible to say who will win in the rematch. Kessler won their first bloody battle by a unanimous decision back in 2010; however did have home advantage which likely aided him, but not by much as it was a deserved win. Carl Froch however has bounced back from that defeat as he went on to beat Arthur Abraham in Germany for the WBC strap and despite losing to Andre Ward in the final of the Super Six tournament he proved that setbacks set you up for comebacks as he destroyed the slick south paw Lucian Bute inside 5 rounds to win the IBF strap. Now in the rematch Froch has home advantage and is the bookies favourite just; nevertheless the Viking warrior can never be ruled out, considering the fact that he’s never been stopped and is tough as nails. A fight between two of the toughest men in the game, it will surely be a barnstormer.

Despite all of this however there is one fight, without much surprise, that isn’t a 50/50.

Floyd Mayweather vs. Robert Guerrero: To be honest I can’t say I’m too surprised, considering the fact that Mayweather has successfully ducked genuine threats to his “0” like Saul Alvarez, Manny Pacquiao and Sergio Martinez. I won’t rule Guerrero out completely as he is tough as they come but realistically Mayweather has the defensive tools to put on a show and out class the pretty limited Californian. But let me make a point, when was the last time Floyd Mayweather was in a 50/50 bout? Because as far as I’m aware he has NEVER been in one. Mayweather claims how “he’s been missed”, when to be honest the fans have fights like Froch vs. Kessler II, Donaire vs. Rigondeaux and Alvarez vs. Trout to look forward. The fans don’t look to Floyd as that much of a star anymore as he continues to let them down. In my eyes to be considered the pound for pound best you have to beat the best and for countless years Floyd Mayweather hasn’t done that. He continues to say “I want to give the fans what they want” and I don’t think you could come across a more hypocritical person if you tried. Nevertheless boxing is all a major all time high, be that with or without Mayweather.

« Abraham vs. Stieglitz 2 next Saturday night, March 23rd in Germany

Wilder to Fury: You’re the biggest joke in the game »