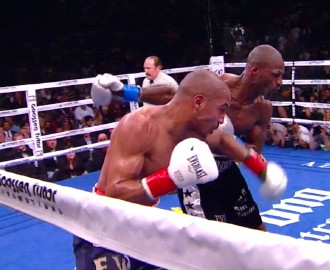 By Marcus Stewart: Reigning WBA and WBC super middleweight champion Andre Ward has been going off on one on Twitter about Carl Froch saying things such as “Froch fans keep saying it wasn’t him in the ring the night we fought…then who was it…his twin brother??!!” and “Froch said he wasn’t himself when we fought, because he was HOME SICK.” Oh, do I detect some frustration from Ward? Bless, I mean I know the legendary Brit has made a comeback but it doesn’t mean “S.O.G” has to get jealous.

Andre Ward refuses to fight away from his comfort zone because he knows he will have a good chance of being exposed. He’s never gone into other fighters’ back yard and I really wonder how he’d cope against the Cobra in Nottingham. Personally I could see Ward melting under the pressure and in the process being caught with huge punches from Froch.

These tweets from Ward clearly do suggest that he’s frustrated because Froch is finally getting the recognition he deserves. He’s a much more entertaining fighter than Ward who tends to spoil and grabs hold. He seems to do more of that than actual fighting which is kind of what boxing is about. Ward will never be a major attraction in the apart because he isn’t pretty to watch, instead he’s extremely monotonous and boring. Froch on the other hand is exciting fast and extremely dedicated.

I’m confident that in a rematch Froch would knockout Ward, especially in Nottingham. I would advise Froch to not go to the states to fight Ward. Manny Pacquiao and Richard Abril were robbed of victories in the states already this year, it’d be a shame if the Cobra were to make it 3 in a row.