Size-wise, Froch believes Brook (40-3, 28 KOs) stands a better chance of beating welterweight Benn (20-0, 13 KOs) than he does middleweight Eubank Jr, who has spent much of his career campaigning at 168.

Nevertheless, it could prove to be impossible for the 35-year-old Brook to get a fight against Conor Benn, seeing that his promoter Eddie Hearn is strategically building him up for welterweight world title honors.

Additionally, network obstacles would need to be overcome for a fight between Benn and Brook to be made a reality.

Benn says he believes he’ll likely be facing Chris van Heerden on April 16th, but he’ll be free after that to face Brook in the summer. Van Heerden hasn’t fought in two years since his fight with Jaron ‘Boots’ Ennis in 2020, and he looked worse than terrible in that fight.

Again, Hearn will rain on Benn’s parade, letting him know that he has other plans for him.

Hearn has already talked of wanting to match Benn against Adrien Broner, Maurice Hooker, or Robert Guerrero once he gets past the 34-year-old van Heerden in April.

In other words, Benn will be fighting another old guy, but with nowhere near the same power or ability that Brook showed last Saturday night against Khan.

“It was really entertaining. I didn’t think it would be such a dominant performance from Kell Brook. I thought it would be closer, especially early on,” said Carl Froch to iFL TV on the total massacre last Saturday night in Brook’s route of Khan.

“Yeah, that’s more of a sensible fight,” said Froch when asked about his thoughts on a match between Kell Brook and Conor Benn. “That’s what I should have said when I was talking about Chris Eubank Jr. I prefer the Conor Benn fight just because of the size.

“Conor Benn, I’ve got a lot of respect for him. I think he’s a great fighter. I think the Chris Eubank Jr. fight is too big for him [Brook]. I actually want Kell Brook to retire now, 100 percent,” Froch said when asked if he still wants Brook to retire despite his impressive win over Khan.

“I think one of the reasons he was able to stay in there is because of, and I don’t want to take anything away from his [Brook] performance because he did really well, but it was because of the lack of what was coming back from Amir Khan.

“That’s why I say Khan has got to retire. If he doesn’t, it’s stupid. It’s ridiculous. He can’t carry on fighting; it’s as simple as that. I’d like to see Kell retire now after that win,” Froch said.

“It was a great win, but if he’s going to fight again, should it be Chris Eubank Jr, or should it be Conor Benn? Conor Benn absolutely just because of the size,” said Froch.

It’ll be difficult for Brook to get a fight against Benn or Eubank Jr, but he’s going to try obviously to get one of those two. With Brook about to retire, looking for an excellent cash-out opportunity at 35, he’ll exhaust his efforts to get Benn or Eubank Jr. inside the ring.

It might be better for Eubank Jr. to stay in a holding pattern for a world title shot against the Gennadiy Golovkin vs. Ryota Murata fight winner. Ranked #1 with the WBA at 160, Eubank Jr. will get a title shot in 2023 and make a lot of money.

Khan was hurt from the first round

“As soon as Kell landed a shot, Khan was badly hurt,” said Froch about Khan being hurt in round one and never recovering. “When his legs turned to Bambi in round one, which I actually said on Sky and I shouldn’t have done,” Froch said when asked where did things go wrong for Khan.

“His legs were gone, but he showed great powers of recovery for a couple of rounds. You’ve got to give him his credit. I think they could have pulled him out after round three or four. It could have been stopped a bit earlier.

“People were saying to me in the crowd that the fight was stopped too early, but I disagree. I think the referee did Khan a bit of a favor there because he was getting badly hurt, badly beat up, and his legs were gone.

“I can’t say it was a bad performance [from Khan]. He stayed in there, and he did himself proud by trying to be involved in the fight. I thought Brook was class tonight.

“The timing was there. He was poised, landing accurate blows, and every time he clipped Khan on the chin, whether it was a jab or right hand, Khan was in trouble,” Froch said.

Carl is correct about Khan looking in bad shape from the first round, as he was shaken up after getting tagged by Brook. From that point on, Khan was hurt each time Brook hit him with solid shots.

Froch: Khan was paid handsomely for his beating

“100% without a doubt,” said Froch when asked if it was the ‘end of the road for Amir Khan.’ “He’s got to retire, but what a great retirement fight.

“He was paid handsomely for another beating, and he needs to say, ‘That’s it now, that’ll do me.’ How much can he take? What is he, 35, 36-years-old? It’s not healthy getting punched in the head. He’s got to think about his future. I’m being serious.

“He’s given us a great night tonight. Hopefully, he’s been paid handsomely, I’m sure he has, and he can turn in now. He’s done himself proud. He was out of the fight early on. He was bang in trouble early on, and he gave us more and more rounds.

“The crowd was on their feet. The atmosphere here was immense. It was a great spectacle, which is what you have for Amir Khan fights.

“It’s always a great spectacle, whether he wins or loses. He tried tonight, but Kell Brook brooked him up,” said Froch.

Khan already came into the fight with Brook hugely rich with a net worth of $40 million, so he didn’t need a final payday.

At this point, the likely only way that Khan will resume his career is if he’s offered an enticing fight against someone he can potentially beat.

An exciting fight would be Khan against Ryan Garcia, Gervonta ‘Tank’ Davis, or Vasily Lomachenko.

While it might seem ridiculous the thought of Khan fighting 135-pounders, in his previous fight before last Saturday, he fought super featherweight Billy Dibb in 2019.

If Khan were willing to fight a 130-pounder, surely he would jump at the chance to battle a popular lightweight like Ryan Garcia or Tank Davis. 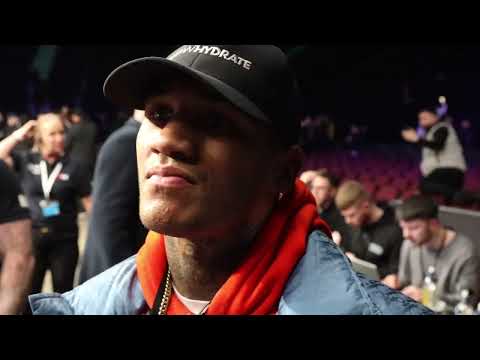 ‘Brook was like a DEVIL’ against Khan says Gareth A. Davies »