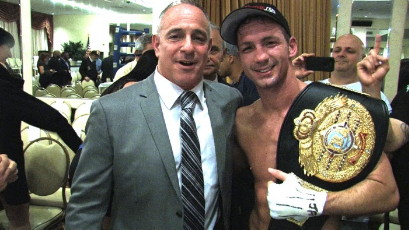 By Mike Stafford: Tommy Rainone scored knockdowns in the first and ninth rounds and cruised to a unanimous 10-round decision over Robbie Cannon to capture the IBA Americas welterweight title at the Plattdeutsch Park Restaurant, in Franklin Square, Long Island on Friday night.

A standing-room only crowd saw an incredible night of action as Bob Duffy’s Ring Promotions, in association with Winner Take All Productions, put on a fantastic, seven-bout card. How good was the matchmaking? All but one of the fights went to a decision. And two of the bouts were decided by majority decision.

In the main event, the slick southpaw Rainone dropped Cannon (12-8-2) in the first round with a straight left hand and that set the tone for the fight. Rainone (19-5) out-boxed Cannon, a five-time Missouri Golden Gloves champion, to earn a unanimous decision.

“I worked very hard for this fight and had to battle through the distractions and elements of the postponement to Hurricane Sandy, a gas shortage and then a Nor’easter that dropped six inches of snow,” said Rainone after the fight. “I had no power for 12 days and had to scramble for places to train. But I did what I had to do to prepare and stay focused. It all worked out in the end. I want to thank all my fans, friends, sponsors and family for there incredible support as well as the promoters Bob Duffy and David Schuster. for going on with the show after the original postponement. This win feels good”

In a six-round lightweight bout, Mike Brooks (9-0) barely kept his unbeaten record in tact after a grueling war of attrition with Bryan Acaba (3-2). This was the fight of the night as Brooks and Acaba took turns pressing each other throughout six heated rounds. Brooks seemed to take control of the fight with a steady and strong body attack. But Acaba poured it on in the final stanza, hurting Brooks with a straight right hand. The scores were 58-56 twice for Brooks and 57-57.

In another excellent showdown that had the crowd on its feet the whole way, two local prospects slugged it out in a welterweight bout. Anthony Karperis, a former New York Golden Gloves champ, staggered Ray velez (2-3) throughout the four round contest, but couldn’t put him away. Karperis (3-0) was forced to go the distance for the first time in his brief pro career. The scores were 39-37 twice and 38-38.

Rich Neves won a bruising four-round affair over rugged Willie Bryant in the junior middleweight division. Neves improved to 6-0-1 while Bryant dropped to 1-5-1.

Heavyweight Nick Argyris, whose boxing career was put on hold for years after he lost part of his right hand in a construction accident, was dropped three times and stopped by Corey Winfield. Argyris is now 5-2 while Winfield improved to 5-10.

In the opening bout of the evening, Dario Socca improved to 2-0 with a unanimous four-round win over Emmanuel Medina (2-2-1) in a fast-paced welterweight fight

DeMarco vs. Burns : A good comeback fight for Antonio »