Adrien Broner: Where to next? 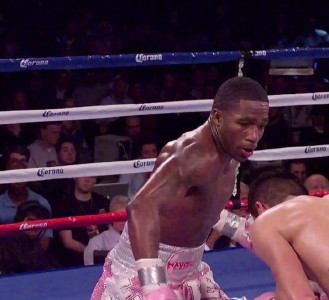 Like most people I haven’t seen Adrien Broner’s earlier fights, but a quick glance at his record looks like it was plain sailing for his first 19 fights with only 3 of those going the distance. Granted this record may be flattering as he didn’t fight anyone of note but in his last few fights he’s looked as impressive as you’d hope a fighter who idolizes and models himself on Floyd Mayweather should look. It’s unfair on the 23 year old to compare him to the best fighter of his generation but the similarities are unmissable.

The way he stalks his opponents using the windshield wiper defense, leaning back throwing sharp straight right hands and discarding right hand punches with a casual roll of the shoulder reminds you of only one person and while I’m hesitant to claim he’ll accomplish as much as Mayweather it’s difficult to see him being far outside the top 10 p4p rankings for the next 10 years. The only problem for the problem now is which route to take next.

Defeating Daniel Ponce de Leon put Broner on the map, but only as a potential future star because de Leon was fighting at a weight he wasn’t comfortable with, having switched up from featherweight while Broner switched down from Lightweight. It was clear from his next few fights that Broner was too big for the division. Antonio De Marco was Broner’s first test against world class opposition and many people thought he bit off more than he could chew by taking on the no.1 lightweight in the world, who for once was much bigger than him. The majority of people would have at best expected a close decision win but what the fight turned out to be was as one sided a fight as you’re ever likely to see.

At no point did Broner look uncomfortable, and he wasted no time, walking down his rangy opponent from the off. Stinging jabs were the order of the night, marking DeMarco’s right eye to the point where he was visibly irritated and worn down, berating Broner every chance he got as if trying to pretend he wasn’t affected by the volume of punches he was absorbing. Soon, his tactics changed to crouching in front of Broner in the middle of the ring eating uppercuts and replying with weary, wide swings more out of anger than tact.

DeMarco looked like an amateur before his corner threw in the towel and this is why I think we can start to believe ALL the hype about Broner; DeMarco isn’t an amateur, or even a journeyman or a good fighter. He was the best fighter in his division and had only been beaten twice before. Once early in his career, the other loss to the legendary Edwin Valero. There can be no doubt now at least that Broner is the best in his division. But there are question marks over how far his height will allow him to go in terms of climbing weight classes.

For me his best option is to sit tight, defend his title and then fight someone like Yuriorkis Gamboa. Gamboa is a world class fighter and a real threat to Broner. Beating him would cement his place in the p4p rankings because no one wants to be the light welterweight champ. Having that title won’t attract any top tier fighters or make them want to slim down to fight you, from that position he would have to chase welterweights at 147 which, if he could even get to that size would most likely see him get beaten up as his power will be left behind at 140.

One thing that is certain is that if Broner makes the right choices with his career he will be a problem for any fighter in the world.

« Steward smiling down on Banks

Robert Guerrero vs. Andre Berto this Saturday in Ontario, CA »