Lemieux could be facing Camacho Jr. on October 29th 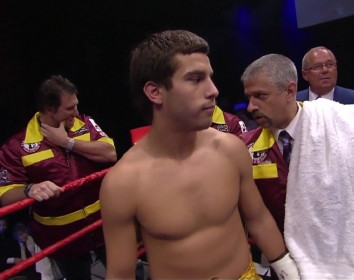 By Chris Williams: Unbeaten Canadian middleweight contender David Lemieux (23-0, 22 KO’s) could be facing 32-year-old Hector Camacho Jr (52-3-1, 28 KO’s) on October 29th at the Bell Centre, in Montreal, Canada, according to boxing news from Dan Rafael on his Twitter page. Lemieux, 21, has an impressive knockout record but still is facing exclusively 2nd tier opposition despite being ranked number #3 by the World Boxing Council and #4 WBA in the middleweight rankings. For Lemieux, Camacho is pretty much the type of opposition he’s been served up for his three-year pro career.

It was hoped that Lemieux would start stepping it up a level or two after his 1st round knockout win over Elvin Ayala in June, but it looks like Lemieux are going to continue putting him in with 2nd tier opposition until he gets a title shot. It might be the wise thing to do, because was getting tagged with the cleanest of shots in his win against Ayala. Although he took Ayala out, it was painful to see how poor Lemieux’s defense was in the Ayala fight. It was like the guy was walking forward with his hands down because he was getting clocked by Ayala. And it’s not just in that fight.

Lemieux is getting tagged in all of his fights that don’t end immediately. He really needs to work his defense because he’s going to have major problems when he’s finally put in with a fighter with a pulse. From what I’ve seen of Lemieux, I don’t see him as a top 15 middleweight. I think there is a whole bunch of better fighters than him in the middleweight division.

Needless to say, I think Lemieux’s rankings – and record – is totally inflated. But if that’s how they want to bring him up, by mathcing him against lower quality opponents until throwing him in the deep end, so be it. I think it’s stupid, but that will be Lemieux’s problem when he gets thrown in with a guy like Sergio Martinez, Gennady Golovkin, Dmitry Pirog or Felix Sturm. I can’t see Lemieux getting close to beating any of them. I pretty much see Lemieux as another Julio Cesar Chavez Jr., only Canadian version.

Ideally, Lemieux needs to move down in weight to junior middleweight because he looks really short for his listed height of 5’10 1/2″. He looks more like 5’8″ rather than his listed height. His last opponent Ayala is listed at 5’11”, and looked to be at least three inches taller than Lemieux.

Andre Berto likely to be facing Freddy Hernandez on 11/27 »