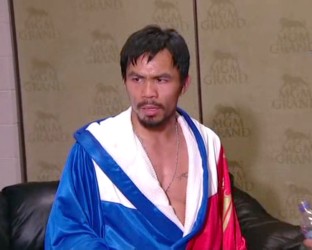 By Dan Ambrose: In the latest boxing news, Top Rank promoter Bob Arum expects his November 13th fight card with Manny Pacquiao vs. Antonio Margarito to sell between 60,000 and 70,000 tickets, according to Steve Kim at Doghouseboxing.com The tickets for the Pacquiao-Margarito bout are already on sale, and Arum says that they’re going fast. The bout will be taking place at the Cowboys Stadium, in Arlington, Texas.

This is the same location where Pacquiao fought his last fight in March against the less than popular Joshua Clottey. That fight sold 50,000 tickets. Those are really good numbers given that Clottey had no real fan base, and it was a fight where fans were coming almost exclusively to see Pacquiao. The undercard had the following match-ups:

It was a card stacked with Hispanic fighters in hopes of drawing fans from the surrounding Mexican community. However, it’s likely that most of the fans that showed up came to see Pacquiao.

The November 13th card will have these fights on the undercard:

As you can see, the undercard lacks meat and appears to be mostly mismatches, other than the Rigondeaux-Cordoba Battle. If this card is go do better than the Pacquiao vs. Clottey card, it will have to be because Margarito drawing from his Mexican fanbase. It’s hard to tell how many fans that Margarito can bring in, because he’s never been a very popular fighter and he’s not a huge star in the U.S.

« Golden Boy Promotions signs Malignaggi: Isn’t it a bit late to be signing him?

Lemieux could be facing Camacho Jr. on October 29th »