Andre Berto likely to be facing Freddy Hernandez on 11/27 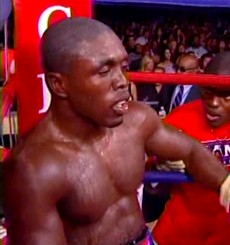 By Jason Kim: For those boxing fans that have been hoping that WBC welterweight champion Andre Berto (26-0, 20 KO’s) would finally be facing interesting opponent after holding down the World Boxing Council welterweight title for the past two years, it doesn’t look as if that’s going to be happening. Berto, who regularly fights on HBO, is likely to be facing Freddy Hernandez (29-1, 20 KO’s) on the Juan Manuel Marquez vs. Michael Katsidis undercard on November 27th at the MGM Grand, in Las Vegas, Nevada, says Dan Rafael.

Berto was supposed to be fighting his number #2 WBC ranked contender Selcuk Aydin but the two fighters have been unable to negotiate a fight. So instead of seeing Berto against the knockout artist Aydin, boxing fans will likely have to settle for seeing him facing the 31-year-old Hernandez. In looking at Hernandez’s record, you might think he would have a chance at beating Berto or at least making the fight interesting.

However, most of Hernandez’s wins have come against B level opposition. His best victories have come against Mike Anchondo, light welterweight DeMarcus Corley, Ben Tackie, Carson Jones and a younger Jesus Soto Karass in 2004. Having seen Hernandez fight on more than a couple of occasions, I don’t think he has any chance of beating Berto. However, he is someone that will make Berto look good. Berto hasn’t looked good in ages as he’s not taken on any interesting opponents and has become a punch and grab fighter.

It would have been nice to see Berto against Aydin, because it would have been the first real puncher that Berto has been in with during his career. Berto tends to get hit a lot and Aydin would surely test Berto’s chin. Berto hasn’t stepped it up against bigger threats in the welterweight division, such as Shane Mosley, Floyd Mayweather Jr., Manny Pacquiao, Mike Jones, and Saul Alvarez. This has been the knock on Berto.

Instead of taking on interesting opponents, he’s faced little Steve Forbes, Carlos Quintana, Luis Collazo, and Juan Urango. If Berto keeps fighting guys like that, he can probably hang onto his title for another five years before someone ends up beating him. It’s just too bad that he won’t have any significant wins to show for himself if he keeps fighting the guys he’s been fighting. Hernandez is a decent fighter, but the guy is ranked #11 by the WBC. Why isn’t Berto facing higher ranked opposition? I don’t understand why HBO is still showing Berto’s fights, because he’s not winning any fans with his weak opposition and his fights are painfully boring to watch.

« Lemieux could be facing Camacho Jr. on October 29th