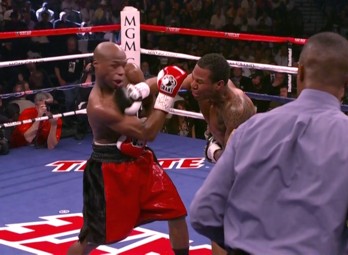 By Dave Lahr: As much as it might be an interesting match-up between Floyd Mayweather Jr. and Manny Pacquiao, I think Mayweather needs to forget about that fight happening and instead go after WBC/WBO middleweight champion Sergio Martinez (45-2-2, 24 KO’s). That fight is the most realistic option that Mayweather available to him in the future, not a fight against Pacquiao. While I think the bout against Pacquiao is the more appealing fight because of the fan interest it would draw, I just don’t think it’s humanly possible to make the fight happen now or in the future.

With Pacquiao afraid to have his blood tested anywhere close to the fight; it’s not realistic to even consider a match between Mayweather and Pacquiao. The word is that Pacquiao is willing to have his blood tested, but only as close to the fight as 24 days, which is exactly what he agreed to do during his failed negotiations with Mayweather in February of this year. Mayweather won’t go for that, so he needs to forget about Pacquiao and let him continue to fight guys like Joshua Clottey, Ricky Hatton and Miguel Cotto.

Mayweather needs to focus on opponents that are willing to agree to his random blood testing. I think Martinez, 35, would agree to the testing and I can’t see it being difficult to arrange a fight with him. Martinez still hasn’t made the huge money in the sport, despite being one of the most talented fighters in boxing for the past few years. Martinez recently defeated WBC/WBO middleweight champion Kelly Pavlik by a 12 round unanimous decision in April to capture Pavlik’s middleweight titles. Martinez now is awaiting the word whether Pavlik will opt to use his rematch clause that he had in his contract with him. If so, then that will keep Martinez busy for awhile. However, I expect Martinez to dominate Pavlik in the rematch and beat him as easily as he did the first time around.

Martinez would be a difficult stylistic challenge for Mayweather due to his southpaw stance, hand speed and his in and out attacks. Martinez, 5’10”, would have a slight advantage over the 5’8” Mayweather and maybe a little bit more power. Mayweather would have to figure out how to deal with Martinez’s powerful left hand and his unpredictable attacking style. Martinez is a young 35, and has good stamina.

There’s not much danger here of him running out of gas after the 2nd round like Shane Mosley did last Saturday night. He’s a very athletic fighter with great talent, balance, defense and is an excellent all around boxer. Martinez should have probably beaten both Paul Williams and Kermit Cintron, losing a controversial decision to Williams and fighting to an equally controversial 12 round draw with Cintron after appearing to knock him out earlier in the fight. The only real lose on Martinez’s resume was against Antonio Margarito 10 years ago in a 7th round stoppage in 2000.

Martinez has improved a lot since then and it’s likely that he would beat Margarito if they were to fight today. I could see Martinez dropping Mayweather two or three times in the fight and making it really close. Martinez can do it all – jab, slug, defend and move. It would be a tough fight for Mayweather, because he would have to come up in weight to 154 to make the fight happen.

Does Saul Alvarez have what it takes to be a future champion? »