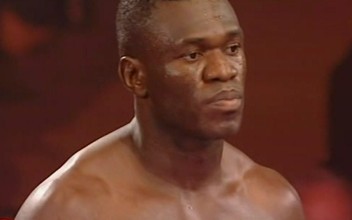 “The Dancing Destroyer” will be back at the North Sea on March 6th. Herbie Hide will return to the Kugelbake-Halle in Cuxhaven, Germany, for his WBC Final Eliminator against Matt Godfrey. In his last fight on November 18th, 2008, Hide won an unexpected hard fought unanimous decision over Polish journeyman Lukasz Rusiewicz.

“I was sick at that time and could not show my real power and speed”, says Herbie. “That’s why I am very happy that I can go back to Cuxhaven and show the people there the real “Dancing Destroyer”. I will get rid of Godfrey in style to go on and become cruiserweight champion of the world.”

If Hide is true to his word he could make history in becoming the first former world heavyweight champion to claim the cruiserweight title. The winner of Hide vs. Godfrey is set to face the winner of the WBC title bout between Giacobbe Fragomeni and Krysztof Wlodarczyk (March 27th in Milan).

“Herbie might be world champion by summer”, states promoter Ahmet Öner. “Nobody would have thought that when he first signed with me two years ago. I was the only one who trusted in him. I knew that he still had what it takes to achieve great things. Herbie is special.”

There will be seven fights in Cuxhaven in total. Eurosport will broadcast the show live on March 6th from 9pm on.

Sylvester, Murat to return on February 28

Former European Middleweight Champion Sebastian Sylvester will make his first fight under the guidance of Karsten Rower on February 28 when he takes on Gaetano Nespro for the WBA International Middleweight Title. It will be the Hurricane´s first appearance since losing a unanimous points decision against WBA Middleweight Champion Felix Sturm. “I am very happy that my promoter Sauerland Event have arranged a title fight straight away,” Sylvester said. “Not only do I have the best memories of Italian opponents but also of Neubrandenburg.” Last April, the Hurricane (29-3, 14 KOs) knocked out Javier Castillejo in spectacular fashion to put himself in a position for a world title fight. “The atmosphere in the Jahnsportforum was great,” he added. “I am thrilled to make my first fight under Karsten Rower in Neubrandenburg. It will be a home match and very special because we are both from Mecklenburg-Western Pomerania.” Nespro 14-4 (2 KOs) has won ten of his last 11 fights.

In the co-featured main event, European Super-Middleweight Champion Karo Murat (18-0, 11 KOs) will be counting on history to repeat itself. On the same night when Sylvester bested Castillejo, Murat celebrated the biggest success of his career by depriving then-champion Cristian Sanavia (40-4, 12 KOs) of his title. Now the duo will battle out the rematch. “I have beaten him once and I will beat him again,” Karo Murat said. “Since winning the title I have become much stronger.”

CANASTOTA, NY – JANUARY 19, 2009 –– The International Boxing Hall of Fame announced its flags will fly at half-staff in memory of light heavyweight champion Jose Torres. He passed away this morning in Ponce, Puerto Rico. He was 72.

Born May 3, 1936 in Playa Ponce, Puerto Rico, Torres won a silver medal at the 1956 Olympic Games. He turned pro in 1958 and under the guidance of Hall of Fame trainer Cus D’Amato, he won the world light heavyweight title from Willie Pastrano in 1965. During his career he posted a 41-3-1 (29 KOs) record that includes wins over Don Fullmer, Wilbert McClure, Tom McNeeley, Wayne Thornton, Eddie Cotton and Hall of Famer Carl (Bobo) Olson. He stayed active in boxing as chairman of the New York State Athletic Commission
(1983-88) and as president of the World Boxing Organization (1993-95). An accomplished author, he penned boxing books “Sting Like a Bee” about Muhammad Ali and “Fire and Fear” about Mike Tyson.

“Jose Torres was one of boxing’s finest ambassadors,” said Hall of Fame Executive Director Edward Brophy. “’He was an Olympian, a world champion, author, commissioner and a true gentleman. The Hall of Fame joins the boxing community in mourning his passing.”

In 1997, Torres was elected into the International Boxing Hall of Fame.