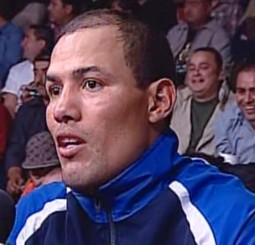 By Manuel Perez: Former two-time WBC lightweight champion Jose Luis Castillo (57-9-1, 49 KOs) destroyed journeyman James Wayka (16-8, 8 KOs) in a 2nd round TKO on Saturday night at the Palenque del FEX, Mexicali, in Baja California, Mexico. Castillo, 35, knocked Wayka down with a left uppercut to the head followed quickly by a left to the midsection in the 2nd round. Wayka, 30, rolled around on the canvas in visible pain and was unable to beat the count. The fight was stopped at 1:13 of the round.

Castillo, who recently moved up to the welterweight class and was soundly beaten in a one-sided loss to B-class fighter Sebastian Lujan in July 2008, looked much better on Saturday night against Wayka. Though clearly Wayka was not nearly in the same class as Lujan, but Castillo looked much more powerful than he had against Lujan, showing that he still had his devastating left hook which he used to knock Wayka down twice in the fight.

In addition to the 2nd round knockdown, Castillo also dropped Wayka in the 1st round after landing two consecutive short left hooks to the head. Overall, Castillo looked more comfortable with the higher weight of the welterweight division than he had in his initial bout in this class. He looked much solid, and had more power than he showed against Wayka.

Castillo uses his jab in the 1st round, hitting Wayka and sizing him up. Wayka, 5’10”, landed several right hands in the round, using his longer reach to land shots against the shorter, 5’8” Castillo. A short time into the round, Castillo moved into range and landed a huge left hook that strayed a little low.

Wayka immediately backed up and went down in pain. He was given a minute to recover. The punch, however, was on the beltline and not all that low but I can understand why he went down, because it was a huge body shot. After the action resumed, Castillo tagged him with a jab and then two short left hand uppercuts to the head that sent Wayka down once more. Luckily for him, the round ended almost immediately after he got up.

In the 2nd round, Castillo continued hitting Wayka with left hand shots, getting in close and loading up with lefts. Wayka found it easy to hit Castillo but it had no effect on Castillo, who walked through the shots to get inside.

A short time into the round, Castillo landed a short left uppercut to the head and immediately followed up with a left to the body that sent Wayka down on the canvas. He never tried to get up because he was in so much pain from the shot. The referee then stopped the fight at 1:13 of the round.

It was a good win for Castillo, but he still has a ways to go before he gets ranked in the welterweight division. Under the best circumstances, he needs to move back down to the light welterweight division where he wouldn’t be at such a size disadvantage because at 5’8”, Castillo doesn’t appear to match up against the bigger welterweights like Paul Williams and Antonio Margarito.