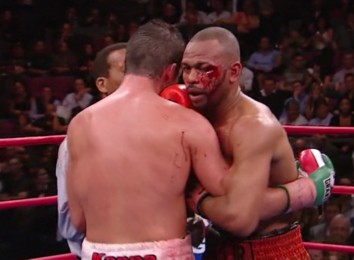 By Dave Lahr: According to Dan Rafael of ESPN, light heavyweight Roy Jones Jr. (52-5, 38 KOs) is looking to fight former super middleweight contender on March 21st at the Pensacola Civic Center in Pensacola, Florida. The choice of Sheika, 32, as an opponent like a bizarre choice for Jones given that Sheika hasn’t fought for almost a year and half since defeating Tiwon Taylor in September 2007.

Before that, Sheika had been out of boxing for two years, from 2005 to 2007 after losing back to back fights to Jeff Lacy and Markus Beyer in 2004 and 2005. Jones, however, at least would probably have a good chance at winning the fight.

A win is something that Jones is probably badly in need of right about now, especially after his one-sided 12-round unanimous decision loss to Joe Calzaghe on November 8th. After surprising Calzaghe with a 1st round knockdown, Jones would then lose all remaining 11 round and look bad in doing so.

There’s obviously no shame in losing to a fighter as good as Calzaghe, but the way that Jones lost was what seemed really bad. He looked shot, unable to pull the trigger and easy to hit. His reflexes, once considered to be the quickest of any athlete in boxing, looked deteriorated from age.

In the end, Jones probably didn’t belong in the same ring with a fighter like Calzaghe at this point in his career. Many boxing fans said the same thing before Jones fought Calzaghe, but there was hope by some that Jones might have enough left of his diminished skills to beat Calzaghe. It didn’t work unfortunately for Jones. Now, in his past seven fights, Jones has lost four of them.

Yet, Jones still remains ranked high in the light heavyweight division, ranked #5 in both the WBA and WBO, #7 in the IBF and #12 in the WBC. With that kind of ranking, it’s curious that Jones would select a fighter like Sheika, who’s been away from the sport for such a lengthy time. Ideally, Jones should be taking on a bottom #15 fighter or perhaps a B-level fighter on his way up.

« Russell Too Much For Reyes