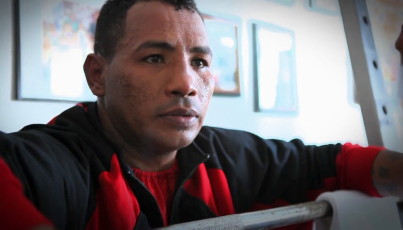 The following conversations with “El Feroz” Fernando Vargas and Ricardo “El Matador” Mayorga took place at their Wednesday, July 25 press conference in New York. This is a follow-up to their July 11 press conference at STAPLES Center in Los Angeles in which a brawl broke out. The fight release follows the conversations. The attached photos (used with 90-day restrictions) were taken with an 8′ x 4′ plexiglass barrier between them.

Fernando Vargas in response to the first press conference…

That’s what happens when cats do stuff like that at a press conference. Did you think I was just going to sit there and take that? I was prepared for it. He’s a bully and that’s the way bullies act, when it is convenient for them to act like that. But I knew it was coming, so I took my glasses off. If I had them on when he tried to hit me, they would have gone to the side of my face and I would not have been able to react and everyone would have grabbed us and it would have been over. And it would have looked like he got the best of me. All of my fans would have been saying, “look at Fernando, he just got smacked silly by Mayorga.”

But it didn’t work out that way. Look at Mayorga, as dark as he is, and he’s darker than me, he turned completely white when I fought back. He felt my power…and I got him.

I am a professional, but if someone acts unprofessional towards me, I will act unprofessional right back. He felt the difference when someone is not going to take that. He knows that and I went and got him. The first overhand right missed, but then I got him with two good uppercuts.

And look at the plexiglas over there (set up for the face-off to keep the fighters clear from each other), he’ll go up there to the glass and act all crazy. He’s a cat that likes to put on a show. But you know what? My buddy saw Mayorga before the L.A. press conference in the hotel lobby. Mayorga then saw me coming then jumped, not walked, jumped into the elevator and started to push the buttons in a panic to shut the elevator before I got there.

But that is just the beginning. That was round one. Mayorga is a stupid fighter and I am an intelligent fighter and I’m going to pick my spots. I am going to knock him out. He already felt my power once. And it’s going to be great to do that at the STAPLES Center in front of a lot of crazy Mexicans. All of my fans will be going ape. This fight is for pride and I will look good doing it.

When it’s over? Remember after he fought Oscar and he was hugging and kissing him after Oscar knocked him out? He’s going to do the same to me. That’s his nature.

Ricardo Mayorga, after a rant against Vargas…

I am sorry if I have offended anyone. I have a great team with me for this fight. If you want to put money on the fight, I would bet two or three rounds. I predict I will knock him out in two rounds.

I had a dream last night that I threw a rotten orange at Fernando Vargas and hit him in the chin. And he went down. And he didn’t get back up. That’s what is going to happen on September 8th.

Fernando knows that this is his last fight and the reason he says that is because he knows he will lose. Lose in the worst way.

Roberto Duran’s son is in my camp helping me prepare to destroy Vargas. Therefore, I dedicate this fight, and this win, to the great Roberto Duran.

Boxing’s Bad Boys Agree to Meet at STAPLES Center on Sept. 8 Street Fight Draws Blood at Initial Press Conference Announcing Match Between ‘Ferocious’ Fernando Vargas and Ricardo ‘El Matador’ Mayorga in Los Angeles; Taunting Turns into Melee As Boxers Can’t Wait to Get a Piece of One Another

LOS ANGELES—Two-time world champion “El Feroz” Fernando Vargas and three-time world champion Ricardo “El Matador” Mayorga barely made it through their promoters’ announcement of their upcoming match at STAPLES Center on Sept. 8, during the first press conference for the event held at the downtown Los Angeles venue (on July 11), before taunting erupted into a street fight that resulted in punches being thrown and landed—and some blood from a cut under Mayorga’s right eye.

“Mayorga can disrespect me all he wants but not my queens [his mother, wife and daughter],” Vargas said. “This will be my last fight for one reason only, for pride. We should have sold tickets to the press conference after the fireworks we had. There will definitely be fireworks in the ring at Staples Center on September 8.”

The notorious trash-talker Mayorga has shown no signs of turning a new leaf.

“I’m going to give Vargas the chance to cash his last paycheck. I would like to say publicly that ‘Fatty’ [Vargas] has always feared me. I conceded to take this fight at 162 pounds because fatty couldn’t lose any more weight. I will do Vargas a favor by retiring him in this fight so his family doesn’t have to suffer every time he steps in the ring. I’m going to do his wife a favor and not let her cry anymore.”

Tickets priced at $300, $150, $100 and $50 are on sale now online at ticketmaster.com, via Ticketmaster charge-by-phone lines at (213) 480-3232 or (714) 740-2000 and at all Ticketmaster ticket centers including Wherehouse Music, Robinsons-May, Tower Records and Ritmo Latino locations. Tickets are also available at the STAPLES Center box office and the box office at TEAM LA at Universal CityWalk.

Leaders from two of the most successful boxing promotional firms in history—Don King from Don King Productions and Kathy Duva from Main Events—have joined to promote the event in association with AEG & STAPLES Center & VEP. The event will also be televised live beginning at 9 p.m. ET/6 p.m. PT domestically at a suggested retail price of $44.95, which is being distributed by SHOWTIME® PPV.

Vargas (26-4, 22 KOs) won his world titles at junior middleweight and is best known for his indomitable will and courageous heart as evidenced by the fact he knocked out his first 17 opponents—including former world champion Raul Marquez. He also won decisions over former (and future) junior middleweight champion Winky Wright and former welterweight world titlist Ike “Bazooka” Quartey.

The native of Oxnard, Calif., now 29, became the youngest junior middleweight world champion in boxing history at just 21 years and 5 days when he dethroned “Yory Boy” Campas to win the International Boxing Federation title on Dec. 12, 1998.

He is best remembered for two epic clashes: a slugfest featuring six knockdowns with then-undefeated Felix “Tito” Trinidad on Dec. 2, 2000, which won Fight of the Year from the Boxing Writers Association of America and a spirited contest against “The Golden Boy” Oscar De La Hoya on Sept. 14, 2002.

Mayorga (27-6-1, 22 KOs) has captured the hearts and imaginations of boxing fans around the globe due to his full-tilt boxing style and penchant for mixing beer and cigarettes with his training regimen—not to mention the withering verbal assaults opponents endure during the weeks leading up to his matches.

Mayorga, 33, hails from Managua, Nicaragua. He burst upon the boxing world in 2002 in his first world title shot against then-World Boxing Association welterweight champion Andrew “Six Heads” Lewis. A virtual unknown at the time, Mayorga taunted his opponent by allowing him to punch him in the face repeatedly with his hands at his waist before sending the champion to the canvas with a thunderous assault in round five that left Lewis unfit to continue in the match.

Few could have predicted at the time that Mayorga would shock the world again when he took on BWAA 2002 Fighter of the Year Vernon “The Viper” Forrest, who held the World Boxing Council welterweight title when they met. Forrest appeared to be as perplexed as Lewis when the Nicaraguan bomber smothered him with a barrage of combinations that sent him to the canvas in the first round. Forrest lasted until just the third round before the referee waved off the beating.

Mayorga proved he was no fluke by agreeing to an immediate rematch with Forrest where he notched a majority-decision win. Mayorga shares the common opponents of Trinidad and De La Hoya with Vargas.

Main Events was founded in 1978 by Kathy Duva’s late husband Dan Duva. In addition to the hundreds of world title bouts it has promoted, Main Events has promoted some of the biggest PPV events in history like “Showdown” the 1981 undisputed welterweight unification bout between “Sugar” Ray Leonard and Thomas “The Hitman” Hearns; “The Battle of the Ages” 1991 undisputed heavyweight championship between Evander Holyfield and George Foreman; the “Miss Howard Stern New Year’s Eve” pageant, and the 2002 Lennox Lewis-Mike Tyson heavyweight showdown which at the time set the record for the highest grossing PPV event of all-time.

Don King Productions has promoted over 500 world championship fights with nearly 100 individual boxers having been paid $1 million or more. DKP also holds the distinction of having promoted or co-promoted seven of the 10 largest pay-per-view events in history, as gauged by total buys, including three of the top five: Holyfield vs. Tyson II, 1.99 million buys, June 1997; Tyson vs. Holyfield I, 1.6 million buys, November 1996; and Tyson vs. McNeeley, 1.58 million buys, August 1995.


« Baldomir-Forrest: Does Vernon Have Anything Left?