Stephen Espinoza explains why Spence vs. Crawford failed to happen

By Chris Williams: Showtime president Stephen Espinoza has revealed that a combination of Terence Crawford’s stubbornness, insistence on getting transparency for expenses, and the slowness of his responses to the deal points ultimately sunk the negotiations for the Errol Spence Jr fight.

Espinoza says if talks do restart for the Spence-Crawford clash later this year, there are going to need to be some changes made on Crawford’s part for the fight to have a chance of happening.

“Avanesyan came to fight, and I think Crawford’s fans were getting a little bit impatient. You’re usually seeing him break out, and then it was like a bold of lighting out of the blue, and then it was over,” said Stephen Espinoza of Showtime to Fight Hub TV about the Terence Crawford vs. David Avanesyan fight.

“So maybe there’s a little bit of ring rust there. He had a decent opponent. Terence took his time, and it was an impressive result.

“Well,  it’s still an attractive fight. No one is going to hold grudges and say we’re not going to deal with him just because the first time didn’t go the way we wanted,” said Espinoza when asked if they plan on restarting negotiations for Errool Spence Jr vs. Terence Crawford fight.

“There’s other factors now. The mandatory has been ordered, and there’s all of that. There’s the assumption, ‘Oh, well, you can wave a magic wand and make it all go away to get a Crawford fight.’ I don’t know if that’s the case right now; it’s not as simple as that. 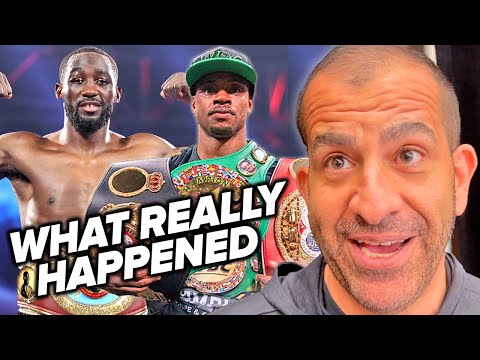 “I have no doubt that from this side to Errol and everyone else that is throwing that opportunity away. They’re still looking and saying, ‘Look, this can realistically be made. Great. But having said that, nobody wants to go through that experience again.

“I know there’s a lot of different versions of what happened. I know that from this side, it felt like the rug being pulled out from under us with very little notice, and so there’s a little bit of damage control that can be done there.

“It doesn’t mean we’re not going to jump back in negotiations if there’s an opportunity to do so. There’s got to be a different dynamic. There were certain points where a range of issues that Terence brought up that really didn’t get resolved and lingered out there, and then things all fell apart. So no one wants that dynamic again.

“So in order for this to be a productive thing moving forward, there’s got to be a different way going about it rather than sitting there and going an inch at a time over months and months.

“So if this is going to get done, we all know what the issues are and what the basic structure is. Either people are interested, or they’re not. No one wants to waste any more time. So if he’s interested, there’s no perfect deal.

“There’s an old saying. A good deal is a deal where everyone is unhappy. Instead of trying to get the perfect deal, let’s get the best deal we can under the circumstances.

“I don’t want to point fingers, but if you ask this side, I think a lot of the dragging on was due to Terence’s own asks and the timetable he was responding. It seemed like a lot of time would go by after each offer, and there was a stubbornness that dug in after certain points that we thought shouldn’t have been insurmountable.

“I’m sure he has a different take on it, but we know what the issues are. There’s nothing new. These are all issues that all big fights are based. The thing is, nobody wants to get back and be in this soap opera of weeks and weeks of negotiating.

“So if we’re going to jump back and deal with it, then let’s jump back into it and get it done quickly. Not that I’m aware of, but there are sometimes conversations going on that don’t go through me,” said Espinoza when asked if negotiations have resumed between Spence and Crawford.

“Maybe on the PBC side or maybe with Al or TGB, there could be conversations there.

“We don’t have to address the first point that much because there’s been a lot of promoters and fighters that come out and say, ‘It’s not unusual to fight without a guarantee. It’s absolutely not,” said Espinoza about Crawford’s unhappiness about not receiving a guaranteed purse for the Spence fight.

“In fact, pay-per-view guarantees didn’t come into existence until three years ago. So the reality is for the longest time and for the bulk of the pay-per-view business, there were very few guarantees. So now [for Crawford] to come in and say that ‘I’m the first one in history not to get one,’ that’s just factually incorrect.

“That has never been an issue on this fight or any other fight that we’ve been involved in. If transparency means something else.

“Here’s where it gets complicated. If you’re saying, ‘I get the right to approve expenses.’ First of all, I have a problem with that because what’s going to have when I tell you, ‘This is what TV production costs,’ and you say, ‘No, I think it would be cheaper.’ So wait a minute. Now, I can’t produce it?

“We’ve been doing this quite a while. I know what it costs. If it costs pretty much the same as other big pay-per-views, there’s an industry standard. We’re not going to go into a promotion and have the risk of someone saying to us two weeks out, ‘No, I don’t like that contract. I’m not signing.’

“Or go into it saying, ‘we’re  waiting for a fighter’s signature, and I don’t know when he’s going to get around to reviewing this expense and approving it.’ It’s just not a realistic way to do business.

“You’ve got to have a certain level of trust. There are certain protections for disclosure up front, but the reality is to be able to approve everything along the way; one is ever going to do that because the reality is there’s no way people are going to go into it and start spending the budget money and go into a promotion and then two weeks out, someone gets a bug up their a** about an expense.

“And they say, ‘You know what? I don’t want you to spend any more marketing money.’ Who is going to go into a deal where you’re at someone else’s mercy until the very last second?

“The reality is if you’re asking to approve expenses, the question is, what if you don’t approve? What happens? We saw this, and this is a great example of Mayweather-Pacquiao. You remember it well. So we had this weird situation where the tickets weren’t released until ten days before the week of.

“Why was that? Because the parties had mutual approval and they reached an impasse, and everybody was screwed. That is the cautionary tale.

“So it’s great to say, ‘okay, mutual approval,’ but what if you don’t approve? What are the repercussions there, and how is it resolved? If your position is, ‘No, it has to be mutual approval, and I have the ability to blow it up at any point up until fight night,’ you’re not going to get a lot of people taking that deal because you’ll up with something like Mayweather-Pacquiao but worse.

“In that case, the ticket demand was so high that it didn’t really matter. In some sense, a lot of the tickets were spoken for anyway, but it was an ugly situation.

“You can’t be in this where someone is going to have the ultimate leverage. It’s got to be, ‘Hey, if the two promoters don’t agree, the network breaks the tie,’ or there’s got to be some way of resolving it.

“I think that’s the way it has to go. You laugh, and people use the metaphor, but maybe we all need to get in the room and lock the door and spend eight or ten hours, and if we don’t have a deal, then everybody goes off and lives their life.

“I think there’s got to be some way to change the dynamic and change the pace of things. It’s a tough one. Something has to change,” said Espinoza when asked if he believes they can get the Spence vs. Crawford fight done this year.

“We can’t just repeat the same dynamic as before. Spence was done with this deal, and PBC weren’t that far apart from having the terms resolved. So it’s imminently doable. It’s not something in the abstract where I can look at it and say, ‘We should be able to work this out in two or three hours.’

“That requires some trust and give and take, and that’s been a little bit difficult to get in this situation. At this point, Errol has been very clear He doesn’t want anything other than big fights. He doesn’t take tune-ups, not even after car accidents. Not even after time off.

“I think there’s some satisfaction he would get if he were to go in there and beat Keith Thurman. There are definitely some grudges held and some resentment, and sometimes that makes for the best fights.

“Whenever he does get it, he’ll take it. I’m confident that you do the right fights, the money will come. You don’t blow an opportunity for a title fight over money,” said Espinoza.