By Jake Tiernan: Unified heavyweight champion Oleksandr Usyk continued with his callouts of WBC belt holder Tyson Fury on Twitter, posing in front of an oversized hamburger that he was about to eat, telling ‘The Gypsy King,’ “You’re next.”

Fury needs to trim down in weight from the 270s to the 250s to have the mobility & cardio required to battle the much more agile Usyk, considering he’s going to be using a great deal of movement.

It would be a mistake on Fury’s part to use the same simple fighting style we’ve seen from him over the last three years, in which he throws a shot and then dives in for a clinch. From there,  Fury leans on his opponents with his large frame to tire them out.

That approach won’t work against Usyk because he’s not going to allow Fury to grab & lean like the three heavyweights that he’s fought since 2020.

Belly, you next 🍽️ @Tyson_Fury pic.twitter.com/vDTCR8gzE0

Fight of the century

“This fight is the fight of the century. Remember when there was Muhammad Ali and Joe Frazier I? They built it as the ‘Fight of the Century.’ Now, Tyson Fury & Oleksandr Usyk for the first heavyweight four-belt holder in history. It’s never been done before. 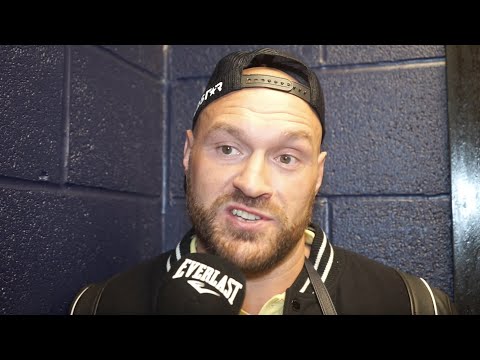 “It’s a very interesting fight. You’ve got a giant versus a normal-sized heavyweight, but you’ve got the slick southpaw against the giant. I can do whatever he can do as good as he can do it.

“I’m not really interested in the undisputed, but you might as well chuck it out there as well to all the accolades. What happens when I’m gone, I don’t give a damn about to be fair,” said Fury.

Anthony Joshua vs. Jermaine Franklin “Is not done” – Eddie Hearn »