By Jake Tiernan: Joe Joyce says he “gauged” Tyson Fury in his scouting mission during his last fight against Derek Chisora on December 3rd.

Joyce (15-0, 14 KOs) could be next up after WBC heavyweight champion Fury faces IBF, WBA & WBO champ Oleksandr Usyk in April. If Fury wins that fight, Joyce, the WBO interim champ, will be next up unless Tyson decides to vacate that belt to avoid him.

The WBA has complicated things by ordering the Usyk to defend against their ‘regular’ champion Daniel Dubois.

It’s unclear whether Fury will take that fight first or go in the direction of the arguably tougher match against Joyce, which could be the most challenging opponent of his career.

“I kind of gauged him, but he knows who he’s fighting; he’s fighting Chisora. He knows what level Chisora is at, so he prepares himself accordingly,” said Joe Joyce to Queensbury when asked if he saw weakness in Tyson Fury in his recent victory over Derek Chisora on December 3rd.

“Now he’s going to be fighting me, so he’s going to prepare himself accordingly. When he gets in his flow and letting his shots go, you’re like, ‘Where is he hitting me from?'” Joyce said about Fury.

“He’s tall, he has really good range, and he’s fast and he can hit. He’s shown now that he can hit as well. It would be a tough fight and would go to the later rounds. It would be a dramatic affair. 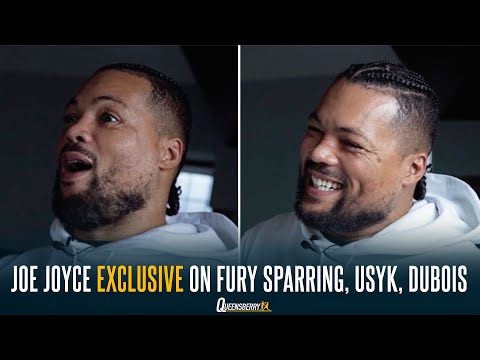 “Definitely,” said Joyce when asked if Fury has improved since he sparred him years ago. “Over there [at Big Bear], Fury was just basically losing weight. It was competitive sparring, and there was Guido in the mix as well. There was a red mark on Fury’s forehead that was from Guido connecting with a right hand. So they had good spars too.

“That was when Fury was conscious about losing weight because he was massive at one point. I sparred with him then, and he was hard to hit on the ropes. I couldn’t hit him on the ropes. Obviously, I was taking the pi**. He was on the ropes moving his head, and I really couldn’t hit him. That obviously was when I first started the pro game, and I’ve learned a lot since then,” said Joyce.