By Craig Daly: Juan Francisco Estrada is interested in a fourth fight against Roman ‘Chocolatito’ Gonzalez or a fight against bantamweight champion Naoya ‘Monster’ Inoue for his next fight.

Rather than seeing the fight as closing the chapter in their three-fight rivalry, the 32-year-old Estrada would like to fight the former four-division world champion Chocolatito a fourth time in an immediate rematch.

Given the 35-year-old Gonzalez’s advanced age, it’s important that Estrada fight him as soon as possible if he wants a chance for the fourth contest before he retires. Still, a match-up with ‘Monster’ Inoue (23-0, 20 KOs) would be a hard one for Estrada to pass up if he has the opportunity to face the Japanese star.

For Estrada to fight Inoue, he’ll need to move up to bantamweight [118] to fight him for his belts right away, as Naoya is expected to begin campaigning at 122 soon, possibly after his next fight against WBO bantamweight champion Paul Butler on December 13th.

Estrada is more than big enough to fight at bantamweight. If you saw how huge Estrada looked in comparison to Chocolatito Gonzalez last Saturday night, it’s clear that he can fight at 118 without being undersized.

The power and the hand speed of Naoya Inoue could be an issue for Estrada because he’s not hard to hit, as we saw last Saturday. If Inoue is able to connect with as many shots as Chocolatito did, Estrada is going to need a good chin to take those massive shots.

It’s an opportunity for greatness for Estrada by taking on ‘Monster’ Inoue next. If Inoue is the undisputed champion after his fight with Butler, Estrada will have the chance to win all four belts at 118 before turning to the 115-lb division to attempt to do the same in that weight class.

“It was a great fight with Gonzalez. We ended the trilogy. Hopefully, we can do a fourth fight [with Chocolatito],” said Juan Francisco Estrada last Saturday night at the post-fight press conference following his win over Roman ‘Chocolatito’ Gonzalez in their trilogy.

“You saw what happened in the last fight [in March 2021]. The most important thing is that I won, and I clearly won in this fight. I don’t know why they gave that result,” said Estrada about the judge that scored the Estrada-Gonzale 3 fight 114-114, which is identical to what DAZN commentators Sergio Mora and Chris Mannix scored it.

“As long as the judges saw me win, it’s good, I’m happy, and I feel I won clearly in this fight. 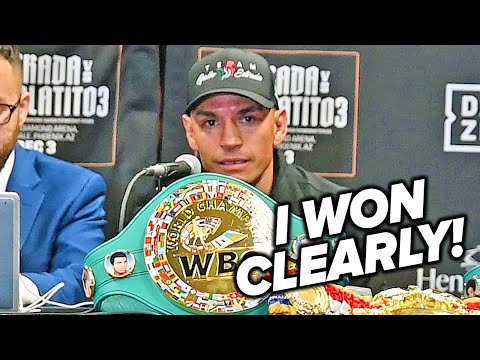 “We ended the trilogy. It was three excellent fights, but if they want the fourth fight, I think they deserve it. But if not, I’d like a unification against another champion. That looks like the path I’m going to be following.

“I wasn’t trying to allow him to win a round, but he did win some. What can I say? He’s a great fighter, but thank God; I won the majority of the rounds. That’s what’s important. People were screaming my name, ‘El Gallo,’ and that’s what motivated me to keep going forward.

“I would like to fight against Inoue, but what motivates me more is to fight for belts. It’s been a dream to unify since I was a flyweight. It’s something I’ve always wanted. I would like to unify, but also, I’m not really struggling to make super flyweight yet.

“Maybe this victory is what gets me into the Hall of Fame and the history books of Mexican boxing. I’m very happy, but there’s still a long path ahead of me,” said El Gallo Estrada.

“The Chocolatito fight will always be the biggest, perhaps, but we’re trying to make as many unified and undisputed champions as possible in a weight class,” said Eddie Hearn when asked where he would like Estrada to go next.

“Every champion should have one champion. So in the flyweight division, I really feel with [Julio Cesar] Martinez with [Sunny] Edwards, [Jesse ] ‘Bam’ Rodriguez, and with [Artem] Dalakian, we could get an undisputed champion.

“I’d like to do it in the super flyweight division as well. So the winner of [Kuzoto] Ioka against [Joshua] Franco would be a very good unification, and maybe see Juan try and become undisputed in 2023. Why not?” said Hearn.

“I don’t know what the plans are for Roman Gonzalez, but as I said, I feel he can still make a lot of good fights in the future,” said Estrada when asked if Chocolatito should retire. “My recommendation is that he stays in boxing because he still has a long path ahead of him.”

“I want to unify all four belts. That would for sure get me into the Hall of Fame. I think this trilogy as well got me into the history books of boxing because I thought it was one of the most important trilogies in fights in the decade,” said Estrada.