Hearn feels that WBO welterweight champion Crawford (38-0, 29 KOs) isn’t a big enough star for a fight against Avanesyan (29-3-1, 17 KOs) to bring in a ton of pay-per-view buys, and he’s not helping himself by his inactivity.

Crawford hasn’t fought since November 2021, and he’s fought only once a year since 2020. With that inactivity alone, Crawford will have problems selling a pay-per-view against the little-known 34-year-old Avanesyan.

Also, Crawford has never established himself as a PPV attraction in his past attempts against Shawn Porter and Amir Khan.

Hearn feels that the reported $10 million that Crawford is making for the Avanesyan fight will lead to him wanting even more money for a fight against Errol Spence Jr, asking for $20 million, which will make it difficult to make that fight happen. 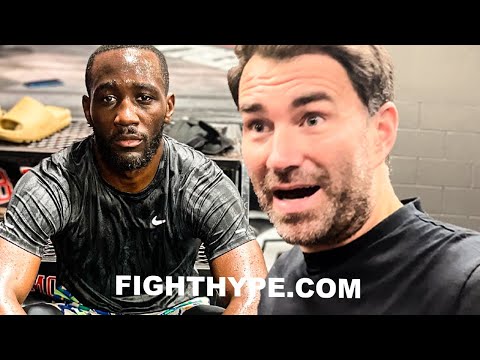 When asked if he believes he could promote Crawford, Hearn said not for the kind of money he’s getting for the Avanesyan fight.

At 35, Crawford is a little too long in the tooth for Hearn to try and build him from the ground up into a major star because it would take too long, and he doesn’t have enough years left in his career for that kind of undertaking.

If Crawford is only willing to fight for huge amounts of money annually, he wouldn’t be active enough for Hearn to turn him into a star. For Hearn to rapidly make a star out of Crawford, he might need to fight at least three times a year, and that wouldn’t be doable if he’s asking for $10 million to fight fringe contenders like Avanesyan.

“If you’re getting paid that much to fight Avanesyan, you want 20 [million] to fight Spence or 25, which is still too much money. So everybody is going mad.

“Errol Spence, now, when is he going to fight? Is it going to be March against [Keith] Thurman or something like that?

“Not for that sort of money,” said Hearn when asked if he can promote Terence Crawford. “But at the same time, he’s an unbelievable fighter. The way you promote a fighter is you build them. You have to get ahold of them early enough.

“Diego Pacheco is a good example. He turns pro at 17, start boxing him on these big shows, he looks good, he starts knocking people out, he’s from South Central LA, and then you fight him on a card all of a sudden, and you hear a much bigger round of applause when he walks in.

“He’s 21. When he gets to 23, he’ll be headlining in LA, and he’ll be selling out the old StubHub. That’s how you build a fighter. Terence Crawford is now 34 [correction: 35]. He’s a brilliant fighter. Maybe pound-for-pound #1.

“But I feel they should have built him more. It’s difficult because you want to fill arenas with him in Nebraska, but you cant generate a gate you need in Nebraska. But for me, visually, when you turn on the TV, and you see a guy who is selling 10,000+, that’s when you’re building a star.

“It’s the same with Deontay Wilder in Alabama. When they went there and done that. It’s wild. Americans and everyone will tune in and see. Like tonight, if you tuned in tonight, you go, ‘Wow, it’s wild in there, a great atmosphere.’ So you’re immediately engaged.

“If you turn on somewhere and it’s empty, and you think, ‘This guy is no star.’ So building a fighter is not saying you can do it at 34. It’s not a lost cause because he’s pound-for-pound #1,” said Hearn when asked if it’s a lost cause trying to turn the 35-year-old Crawford into a big star at his age.

“The problem you have in this country is that Terence Crawford could walk down Glendale in the mall or in Phoenix or wherever, and no one would have a clue who he is, and he’s the pound-for-pound #1 in the sport.

“I find that unbelievable. No, it’s not [good for the sport]. I think it’s a mix of laziness. I also think boxing has a tough sport because there are so many sports ahead of it in the pecking order here [in the U.S.].

“If there’s a British champion in England who walks into a shopping mall. They’ll get mobbed because boxing is probably the #2 or #3 sport,” said Hearn.


« Twelve Current and Past Heavyweight Champions!