By Barry Holbrook: Eddie Hearn says Conor Benn’s hearing with the board has begun on his failed drug test for the banned substance clomifene.

Hearn makes it clear that he’s not involved in the hearing, and if his popular young welterweight star Benn (21-0, 14 KOs) is given a ban, they’ll deal with it.

As of now, Hearn isn’t sure what length of a ban the 26-year-old Benn might receive. It could be a short one of three to six months, given that this is his first positive test.

If it is a short ban, Benn could be back in the ring in the first half of 2023, ready to resume his march to a world title at 147.

What we don’t know is if Benn’s positive tests were a sign that he’d been using PEDs to take his career to the next level and give him extraordinary power and energy that he didn’t possess four years ago when he was struggling to beat lesser fighters like Cedrick Peynaud (8-8-3, 4 KOs).

If Benn’s sudden success inside the ring was a result of performance-enhancing drugs, we could see him revert back to the average fighter he’d been in the past four years ago.

In that case, it might not be worth it for Hearn to keep Benn around unless he’s going to match him against exclusively beatable ham & eggers to make money and set him up for a cash-out against a big welterweight star like Errol Spence Jr or Terence Crawford.

“I’m not involved with that hearing. As I understand it, it’s now underway. Conor Benn’s case will be heard, and then they can make their decision. Whatever the decision is, let’s get on with it. If he’s going to get a ban, let’s get it,” said Eddie Hearn to iFL TV about Conor Benn.

“Maybe they find him not guilty. Maybe he gets a year’s ban. Maybe he gets three months. We’re not looking at the moment about how Conor Benn’s career can resume until that hearing is over.

“That’s the most important thing because people aren’t going to accept him returning and fighting in another country or another commission until he’s had a hearing. The next question is, for how long? I haven’t got a clue.

“A day, two weeks, a month. Hopefully, as soon as possible in terms of the findings and the results.

“They’ve said, ‘We’ve removed him from the rankings, for now, subject to the hearing.'” 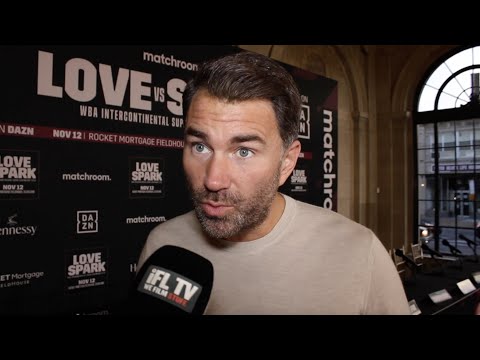