By Charles Brun: Tyson Fury’s dad John Fury took to social media today to send a blaming message to Eddie Hearn for the Anthony Joshua negotiations falling through for their December 3rd mega-fight in the UK.

Instead of John looking at his own son Fury as the main culpret for the fight with AJ not happening, he chose to blame Hearn. It seems pretty obvious that Fury (32-0-1, 23 KOs) messed things up with the deadlines that he set.

John should be taking Fury to the woodshed after the way he screwed the fight up by the foolish deadlines that he kept setting. Fury should have let his promoters do the job without him sticking his nose into the business with his silly deadlines.

If not for Fury, the fight would have likely happened. Oh well, maybe down the road the fight can happen, but that’ll depend on the outcome of Fury’s fight in February or March against Oleksandr Usyk.

A loss for Fury against Usyk will make it pointless for him and Joshua to mix it up because the boxing public won’t be bothered paying to see that albatross.

“I’m going to put this to bed finally with the Eddie Hearn and AJ situation and my son,” said John Fury on Instagram. “Yes, Eddie. You stopped the biggest fight in British history from happening through no fault of our own.

“You were offered 60-40. You know, like I say, some people just think that they’re more clever than they really are. I’m not trying to be a clever man in any way, shape, or form because I’m not that clever. No education, but it’s not me that put the block on.

NEWS:   Fury will be arrested if he slaps Usyk says David Haye

“The fans wanted it with the biggest fight between Anthony Joshua and my son. We’re not to blame, Eddie. You did this all on your own in your own doing. But listen, what can you say? I won’t mention it no more; this is it. The final video about the Eddie Hearns and the Joshuas.

“I will not be concerned anymore because it’s out the window now. The fight will never happen. I know who prevented it. Eddie Hearn. Enough said, Eddie,” said John Fury. 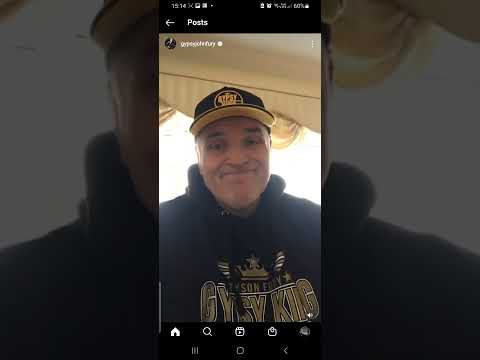