Benn (21-0, 14 KOs) sees the fight against the bigger, stronger, and more experienced Eubank Jr (32-2, 23 KOs) as the same as his previous 21 fights. He can’t wait to get out there and start swinging on the 33-year-old Eubank Jr on Saturday night at the O2 Arena in London, England.

For boxing fans on social media, some believe that the 26-year-old Benn is going to be reckless and will wind up getting caught by one of Eubank Jr’s shots and dropped.

While Benn is good at dishing out punishment, he’s not as equipped to take the blows in return. In Benn’s fight against Chris Van Heerden, he looked worried & flustered when getting nailed by repeated shots in the first round. We also saw Benn get dropped twice by the unheralted Cedrick Peynaud in 2017.

“It’s been real from the get-go, but I’m just tapped into my zone now. Getting primed to go to war. I’m getting into my element, my zone, getting ready to fight,” said Conor Benn to iFL TV.

You can argue that Benn only knows how to fight one way, and that’s to come out slugging in every fight. He’s never been one to box his opponents, as he’s been fed the equivalent of horderves by his promoter Eddie Hearn since he turned pro in 2016.

“It’s been like this for every fight. The closer the fight gets the more feelings I get, the more I’m just ready to go and get filled with that rage. You tell me,” Benn said when asked if he’s going to come out with rage against Eubank Jr.

“I’ve done it 21 times, so I’m going to come out there and do what I got to do. PR, that’s what I think,” said Conor, reacting to Eubank Jr’s dad, Chris Eubank Sr, saying that fans should boycott the fight.

“I’m coming up ten pounds. My dad is not concerned in the slightest. Why are you concerned with your son dropping two or three pounds? It’s minor. Stop being so dramatic with it,” said Benn. 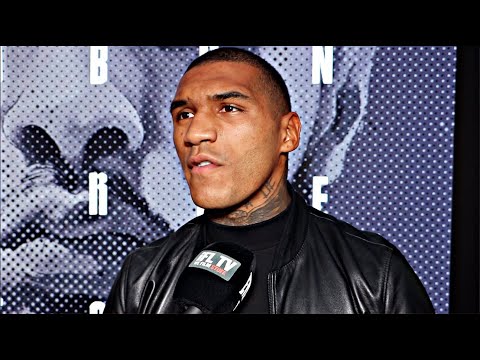