Deontay Wilder on Anthony Joshua’s meltdown inside the ring

The former WBC heavyweight champion Wilder explains that Joshua (24-3, 22 KOs) was created and matched carefully during his career, swerving the risky fights against guys that might beat him.

After the fight, the 32-year-old Joshua had a tantrum inside the ring, throwing two of Usyk’s belts out of the ring and talking a bunch of foul-mouthed nonsense to the audience after grabbing the mic.

The victory was supposed to have been Usyk’s moment, and Joshua made a mess of it with his lousy sport behavior.

The fundamental problem is that Joshua had been fed too many cream puff opponents since turning pro in 2013, and when the going got tough, he lacked the experience & more importantly, the talent to win.

During his nine-year career, Joshua had been listening to all the people telling him how good he was, and it subsequently went to his head, making him believe he was better than he was.

As such, when Joshua’s promoter Eddie Hearn finally started putting him in with opposition that could fight back, he began losing 24/7. His career is pretty much over as a significant player.

“The meltdown comes when you create such a fighter. You give them everything and try to avoid tough fights. Then when it boils down to the wire, you don’t know who to trust; you’ve been listening to all this fake stuff,” said Deontay Wilder to ESNEWS about Anthony Joshua’s post-fight meltdown.

So there it is. Wilder has summed Joshua up, explaining why he was angry after the fight because he was in shock after losing.

Joshua tried to make sense of what happened to him, but unfortunately, he failed to see the accurate picture. As Wilder explains, Joshua’s struggles inside the ring are a product of his creation as a fighter.

Always being matched against beatable fighters, Joshua was exposed badly when his promoter finally took the blinders off and let him test himself against the better fighters inside the ring.

Hearn likes to brag about all the fighters that Joshua has beaten during his career, but he doesn’t say they were a bunch of old or badly flawed guys that were easy marks. 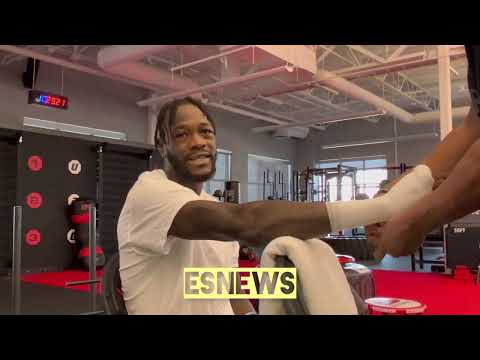