Adrien Broner Has A Business Proposal For Floyd Mayweather

By Vince D’Writer: Former four-division champion Adrien “The Problem” Broner (34-4-1, 24 KOs), is set to make his long-awaited return to the ring on August 20 to fight Omar Figueroa Jr (28-2-1, 19 KOs), at the Seminole Hard Rock Hotel & Casino in Hollywood, Florida.

Both Broner and Figueroa have reached the point in their careers where this battle will take on the role of a crossroads fight, and the winner will earn the opportunity to put his name back in the mix, but the loser will have to explore the possibility of retirement, or fighting boxers that are lower leveled competition. 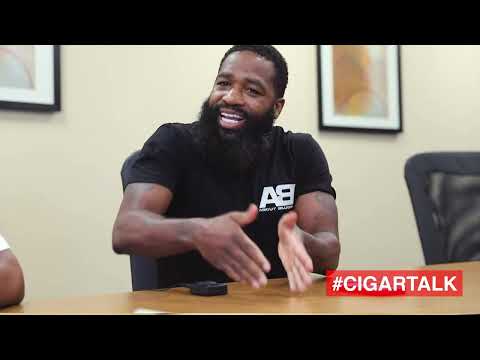 Broner is well aware of the stakes as he is training hard, and locked in on the fight. AB recently celebrated his 33rd birthday, but instead of going out partying, he went to the gym. Another tell-tale sign he’s serious about the fight is his decision to downsize his training camp. During a typical training camp Broner normally brings 15-20 people with him, but for this particular training camp, the only people with AB are his trainer and his cutman.

Even though Broner is focused on his next fight, he recently verbalized an idea in regards to a big money-making opportunity. Broner was a guest on Cigar Talk and he spoke about the idea of him and Floyd Mayweather sharing the ring and participating in an exhibition.

“Me as a real n****, if I was Floyd and he was me, he would never have to fight again. That exhibition sh–, as me being his lil brother, hey lil bro, we fixin to do ten rounds, and we both going to get 100+ million for it, and we ain’t never got to box again. Well I already been getting these bags, but now it’s time for you to get your just due. That would have been done! That would have been done!”

Broner is prepared to fight Omar Figueroa Jr, and he respects what Figueroa brings to the table. However, Broner admits if Floyd called him and gave him the opportunity to fight in an exhibition, he would cancel his upcoming bout and take the exhibition. If Floyd was up to an exhibition, AB suggests they can do the fight in September. They can do it for the culture, and it won’t go on their records.

While speaking with Naji Chill, AB also revealed the fact that he always wanted to spar with Floyd Mayweather, but it never happened. Now since Mayweather is locked in with the exhibitions, Broner believes a matchup with him and Mayweather is easy money.


« Haney not interested in waiting for Lomachenko to take tune-up