Spence vs. Crawford: Have Bud and Showtime Sports reached an impasse?

Although the Desoto, Texas, based fighter seems more than optimistic that a deal will eventually be made, current negotiations may have reached an impasse.

According to sources knowledgeable of the ongoing discussions, Showtime Sports and Terence “Bud” Crawford are miles away from reaching an agreement on the proposed guaranteed purse.

After earning a career-high payday of $6 million for his mandatory WBO title defense against Shawn Porter in November of last year, the 34-year-old champion believes he is justified in demanding a much more lucrative premium to step in the ring with the undefeated, unified Welterweight titlist.

Despite showing unfavorable numbers in previous PPV appearances with Amir Khan, Viktor Postol, and most recently, Shawn Porter, the “pound for pound” combatant is confident that a showdown opposite Errol Spence will produce PPV figures that will justify the higher demanded purse guarantee.

But is the multi-million dollar demand realistic during the current economic climate and PPV bear market? With the ongoing illegal-streaming quandary, combined with the recent history of less than stellar PPV numbers across the board, are Bud’s demands reasonable at this time?

Considering that networks are only entitled to a mere 10% of the gross PPV revenue but expected to insure both fighters’ purses for the high-priced main event, Crawford’s costly request may indeed be a bit too steep at this time.

Realistically, where is the money supposed to come from if the sport of boxing isn’t driving big subscription numbers for Showtime, and fans aren’t purchasing PPVs currently?

A longstanding member of the boxing community, five-decade fight trainer James Gogue, recently shared his understanding of the situation with “War a Week Radio” on YouTube this past Sunday evening.

“It’s just not feasible,” claims Gogue. “Something has to give. Either the fighters have to be more reasonable with their guaranteed purse demands, or the fans will have to start financially supporting these PPVs again.”

“And after being expected to pay for every major boxing event over the past three decades, does anyone realistically expect the long-suffering fans of boxing to pay for these events if they have the option of streaming them for free in HD?”

“If the fighters are so confident that their PPV will perform well and truly believe the fans will elect to purchase this event, what’s wrong with making a more reasonable guaranteed purse demand, while investing in yourself with backend residual income?

“There comes a point where you have to ask yourself, why are these fighters demanding such high guaranteed purses? Someone needs to start worrying about the investment of the networks. If networks like Showtime continue to lose money on these high-priced boxing events, do you really think they’re going to continue investing in our product?”

“Without TV dates, what will happen to the sport of boxing in America?”

“That’s why HBO ducked out of the boxing business several years ago. It became impossible to justify investing millions of dollars in a product that wasn’t delivering comparable numbers to their other original programming.”

“All parties involved have to understand; If the money isn’t there, the fight can’t be made, period. The networks responsible for putting up the money for these events aren’t in business to lose money.”

Errol Spence Jr. has reportedly accepted the proposed offer from Showtime Sports, so it would seem that Terence Crawford is the lone party currently standing in the way of progress, according to sources close to the negotiation.

Apparently, talks will resume for the next two to three weeks in search of an amicable solution. But if an agreement cannot be reached within the allotted time period, Showtime Sports, PBC, and Errol Spence Jr. will be forced to move on from the clamored, undisputed match-up.

Will “Crawford vs. Spence” prove to be this era’s “Lewis vs. Bowe”?

All interested parties remain optimistic that an agreement can be reached within the next few weeks, and hopefully, fans will get to see either Errol Spence Jr. or Terence “Bud” Crawford become the undisputed champion at Welterweight this fall. 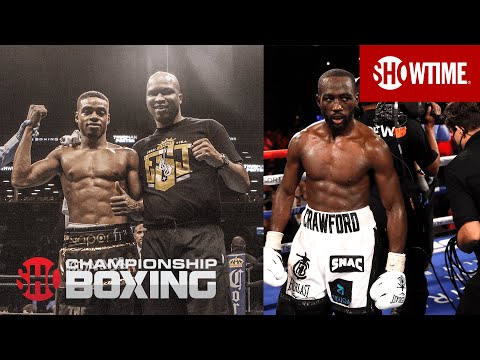 
« Devin Haney says rematch with Kambosos might not happen next

Rey Martinez vs. Sunny Edwards negotiations close to being done for Oct.22nd »