The former heavyweight world champion Tyson views the 23-year-old Ryan (22-0, 18 KOs) as a “big star” already without ever having fought for or captured a world title.

Tyson feels that the Golden Boy promoted Southern California native Ryan Garcia as being “flamboyant”, charismatic, and entertaining to watch due to his explosive power at lightweight.

It doesn’t appear that Haney (28-0, 15 KOs) will be defending against Ryan next, however, because former unified lightweight champion George Kambosos Jr. has already exercised his rematch clause in his contract for his fight with Devin last month on June 5th. Those two are expected to fight in October in Australia.

There’s always the option of paying Kambosos to step aside, but he would likely want a lot of money to do so.

Given how easily Haney beat Kambosos the first time, it’s easier just to get him done with Devin taking the rematch. Once Kambosos is relegated to the dustbins of history, Haney can move forward to the serious fights against Ryan Garcia, Vasyl Lomachenko, and Tank Davis.

Ryan is fighting next week against Javier Fortuna (36-3-1, 25 KOs) on July 16th on DAZN at the Crypto Arena in Los Angeles.

“I was worried about Devin in this fight [with Kambosos], and he handled the guy really easy. But that he just kept his jab in his face, he moved. He may have got hit with a punch [every now and then], but it didn’t disturb him.

“He just did it in a real professional fashion. He didn’t try to be fancy. He scored the punches. The balls in his hand, he’s #1 now. He’s the #1 man,” Tyson said about Haney being the top guy at 135 with all the belts in his possession.

“I think him and Ryan Garcia will be a dynamite fight,” said Mike Tyson. “But not only dynamite, but it would also be a big money fight. Ryan  Garcia is a big star. I don’t think he knows it, but he’s a big star. He’s so flamboyant.

“You got to go with Devin. Devin is going to be the favorite because he just beat the guy [George Kambosos Jr] that beat the man [Teofimo Lopez, who beat the previous man, Vasyl Lomachenko]. So he’s going to go in there as the favorite [over Ryan Garcia]. I was worried,” said Tyson. 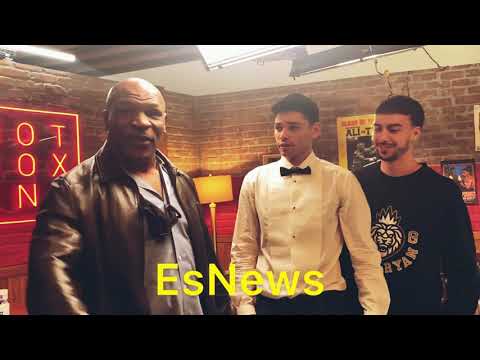