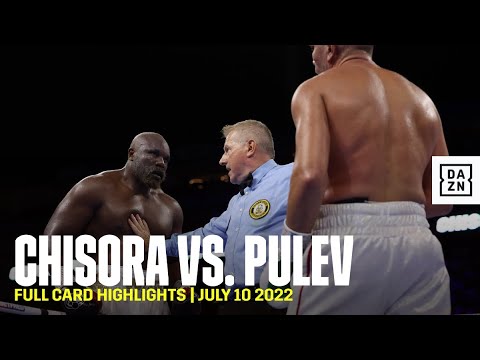 Chisora looked exhausted in the second half of the contest, spending a lot of the time against the ropes covering up. Pulev was unable to take advantage of Chisora’s gassed-out state due to his slow hand speed, lack of power, and failure to let his hands go.

After the fight, Chisora revealed that he wants his promoter Eddie Hearn to set him up with a fight against former WBC heavyweight champion Deontay Wilder.

Kubrat Pulev (29-2, 14 KOs) is the favorite going into tonight’s contest, as he already beat Chisora by a 12 split decision in 2016, and is fighting on a higher level despite being 41 years old.

In the chief support bout, undefeated junior middleweight contender Israil Madrimov (8-0, 6 KO) fights Michel Soro (35-3-1, 24 KO) in a 12-round rematch in a WBA 154-lb eliminator. The winner will be the mandatory challenger to undisputed champion Jermell Charlo.

Pulev did an excellent job of outboxing Chisora the last time they fought, and there’s no indication that tonight’s rematch will be any different. Chisora’s style of fighting, which is a poor man’s version of Joe Frazier, is ideal for Pulev to land his jabs and right hands.

“He’s just robust, and he knows his strengths. Chisora just knows, ‘I’m going to keep marching forward and every round, you might win the first, second and third, but in the fourth, I’m going to keep churning and you’re going to start flagging.

“‘When you start flagging, I’m going to start landing more shots. The more shots I land, the more tired you get. Now we’re even. Who wants to fight with no energy now?’

“Derek can fight on empty when he’s completely exhausted . When he finishes rounds completely & utterly exhausted, he sits down, gets up, and is ready to go again. Not many people have his powers of recovery.

“His presence is like no other that I’ve fought before. He’s tightened up all those gaps in his arsenal that were there in the past,” said Haye about Chisora.

“He’s a lot more well-rounded now than he was back then. He’s older, a lot more miles on the clock, a few more losses and he’s a much better fighter now [than in 2012].

Derek Chisora goes to war tonight against Kubrat Pulev in their 12-round rematch in the main event on DAZN at the O2 Arena in London, England.

Chisora (32-12, 23 KOs) is attempting to keep his gig as a headliner/entertainer going a little while longer, but he absolutely needs a win tonight against Pulev after losing his last three contests.