Robert Helenius says Fury “EASIER style” than Usyk for him

By Jack Tiernan: Highly ranked heavyweight contender Robert ‘The Nordic Nightmare’  Helenius says WBC champion Tyson Fury would be an “easier style” for him than taking on IBF/WBA/WBO champion Oleksandr Usyk. Helenius (31-3, 20 KOs) predicts that he’ll knock out ‘The Gypsy King’ Fury (31-0-1, 22 KOs) if that fight goes down.

Fury’s new close-combat fighting style would be ideal for Helenius, a massive puncher on the inside. If Fury were to try and maul the 6’6″ Helenius the way he did in his last two fights against Deontay Wilder, he could get clubbed into submission quickly.

Helenius is a more robust version of Otto Wallin, who gave Fury pure hell in their fight in 2019, cutting him badly in the second round and battering him with short clubbing punches on the inside for 12 painful rounds.

Trainer Sugarhill Steward’s Kronk Gym taught physical style of mauling opponents would be the wrong one for Fury to utilize against a puncher like Helenius. Without a total revamp on Fury’s game, it’s predictable that he’ll fall victim to the power of Helenius, who could turn him into Adam Kownacki 2.0.

Assuming Fury can no longer return to his old highly mobile fighting style before Sugarhill became his trainer, he could get taken out by ‘The Nordic Nightmare’ Helenius.

#3 WBA, #13 WBC Helenius, and Andy Ruiz Jr. are potential alternative backup options for Fury’s next fight if his promoters at Top Rank cannot negotiate a fight against WBC mandatory Dillian ‘The Bodysnatcher’ Whyte.

Fury’s promoter Bob Arum says he’ll use either former IBF/WBA/WBO champion Andy Ruiz Jr. or Helenius as Tyson’s Plan-B if the negotiations with Whyte (28-2, 19 KOs) fail to pan out.

Helenius, 38, says his priority right now is to get a title shot against WBA champion Usyk (19-0, 13 KOs) because he’s ranked #3 with the World Boxing Association. He wants to be installed as the mandatory following his sixth round knockout victory over top ten contender Adam Kownacki in their rematch late last year on October 9th.

If an opportunity arises for Sweden-born Helenius to take on Fury, he could grab it. One problem that Fury might have in getting Helenius to agree to a fight with him is the likelihood that his WBC wouldn’t be the line. 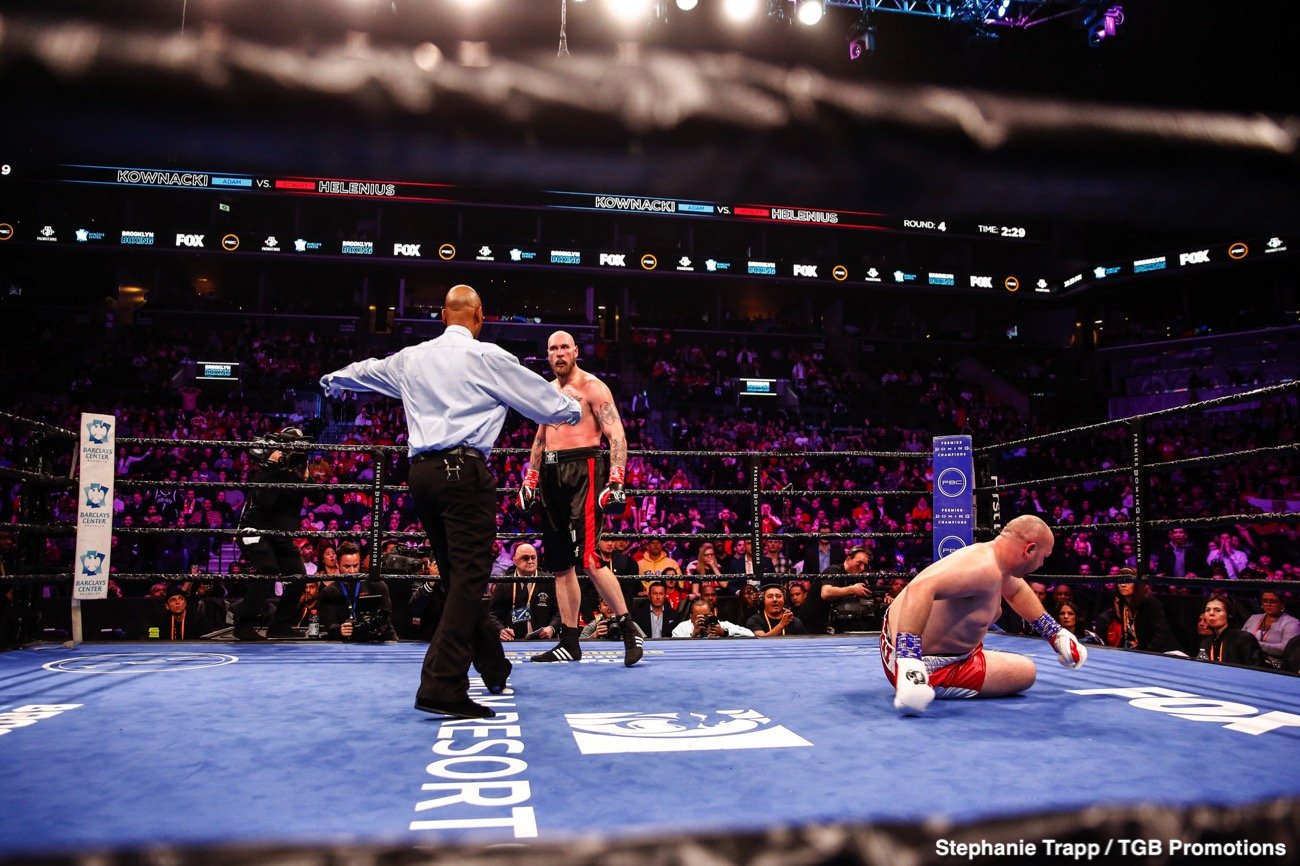 Suppose Fury walks away from his WBC-ordered mandated title defense against mandatory Whyte. In that case, it’ll likely cost him his WBC strap, which means that a fight with Helenius or Andy Ruiz Jr. would have only Tyson’s Ring magazine heavyweight belt to be fought over.

That title means nothing in comparison to the WBC strap, so it’ll be difficult for Top Rank to lure Helenius or Ruiz to take the fight with Fury unless they make it worthwhile for either of them financially.

“I would knock Tyson Fury out. He is an easier style for me than Oleksandr Usyk for sure,” said Helenius to Sky Sports. “I have heard my name mentioned by Bob Arum and others of possibly fighting Fury in March.

“Of course, I feel I would beat Fury,”  Helenius continued. “He looked great against Deontay Wilder, but he would find a much less favorable style against me.

“Whoever comes, Usyk, Fury, anyone, I will be ready. I feel better now than ever in my career. I will win a world title.”

Helenius is one of those late bloomers who has gotten better as he’s aged. Earlier in Helenius’ career, he was beaten by Johann Duhaupas, Gerald Washington, and Dillian Whyte.

However, Helenius has improved dramatically from the fighter that he used to be in the last three years and is far more dangerous.

It’s safe to say that if Top Rank does choose to go with a Plan-B for Fury’s next fight, they’ll opt to use Andy Ruiz Jr. as his opponent rather than Helenius.

Ruiz Jr. is an easy mark for the 6’9″ Fury, whether he mugs him or uses movement, and he wouldn’t have to worry about dealing with the colossal power or size that would come from fighting Helenius.

“We are waiting for a formal response from the WBA; this is my first priority. I fully expect to be officially named mandatory,”  said Helenius.

Two Remarks That Caught Up to Both Larry Holmes and Bernard Hopkins! »