By Dan Ambrose: Eddie Hearn believes McWilliams Arroyo ducked out of his fight with WBC World flyweight champion Julio Cesar Martinez by saying that he couldn’t see out of his right eye after he was twice cut by head-butts last Friday night at the SNHU Arena, Manchester, New Hampshire.

Hearn thinks that the 35-year-old Arroyo chose to use his two cuts as an excuse to duck out of the fight, as things looked bleak for the 2008 Olympian.

Arroyo would have been in an impossible position to win had the fight continued because he was bleeding badly from two cuts, both of which were dripping blood directly into his right eye.

If you’re Arroyo, it made sense for him to bow out of the fight because two cuts that Martinez had caused with his accidental head-butts had put him in an impossible situation.

Hearn didn’t like Arroyo telling the ringside doctor that he couldn’t see how out of his right eye, but the truth, he couldn’t see when the blood was leaking into his eye.

WBC interim flyweight champion Arroyo (21-4, 16 KOs) had knocked the WBC champ Martinez (18-1, 14 KOs) down in the first round, but he was hurt later in the same round.

Martinez shoved Arroyo to the canvas in the second round and was surprisingly given credit for a knockdown.

“I don’t like to say fighters quit because they’ve got balls 26 times the size of mine for stepping in, but he didn’t want to know Arroyo,” said promoter Eddie Hearn to iFL TV on McWilliams Arroyo bowing out of his fight against Julio Cesar Martinez due to an eye injury.

“After the knockdown [in round two], he [Arroyo] was hurt. When the cut came, he looked to his corner and walked back to his corner. He [McWilliams Arroyo] didn’t want to sit down. He said, ‘No, no, no, I’m done.’

“The referee eventually got him to sit down, and then the doctor looked at it. He could have continued; the cut wasn’t that bad, but he knew it was going to be a no contest, and he took that way out of the fight.

“That’s 100% what happened,” said Hearn in his belief that Arroyo quit after the second round to avoid a loss. “I would have loved to have seen that fight evolve because Martinez [was coming on].

“He [Julio Cesar Martinez] has to think a little bit more because he had no regard for what’s coming back. It was a flash knockdown [in round one], but he still got put down, and Arroyo can punch,” Hearn said.

We don’t know for sure that Arroyo could see out of his eye. I mean, if he claimed that he couldn’t see out of his right eye, you got to take him at his word.

There wouldn’t have been a problem if Martinez hadn’t twice lowered his head and charged Arroyo like a little bull because that’s how the cuts were caused. Martinez came forward with his head down and rammed Arroyo, be it accidentally.

If Hearn wants to be upset with anyone, he should look at his own fighter Martinez because he’s the one that caused the two cuts. Without the repeated accidental head clashes initiated by Martinez, there wouldn’t have been the fight-ending cuts.

Sunny Edwards could be next for Martinez

“How much fun is he? He’s a breath of fresh air to be around.

“I said he looked for a way out, and I told his corner,” said Hearn when asked what he had said to Arroyo after the fight. “He didn’t want to carry around.

“The doctor would have 100% let him carry on. It was only because he said, ‘I can’t see, and I don’t want to carry on.’ They had to stop the fight; they had no choice,” Hearn said of Arroyo.

“I was annoyed with the corner and the fighter [McWilliams] because I knew what he was trying to do. He was ducking out of the fight taking a no contest.

“I’m sorry, but that is what happened, and that gave me a hump because it was a great fight, and I wanted to see Martinez finish the job, which he would have done probably in that round.

“I think it can,” said Hearn when asked if a fight between Martinez and Sunny Edwards is possible.

“I think he’s fighting December 11th against his mandatory [Jayson Mama], and it’s a great fight. Sunny Edwards is really difficult to beat, but what a great fight with the history with Charlie ] Edwards as well.

“But any of the champions [for Julio Cesar Martinez], but if we can do it with that back story, even better,” said Hearn.

It would be better if Hearn matched Martinez against WBA champion Artem Dalakian or WBO champion Junto Nakatani rather than the light-hitting IBF belt-holder Sunny Edwards.

He’s just a copy of Charlie Edwards, and we already saw what Martinez did to him. If Martinez is serious about wanting to fight the winner of the Juan Francisco Estrada vs. Roman ‘Chocolatito’ Gonzalez trilogy match, it would be wise to have him get his feet wet at 115 by taking on one of these fighters first: 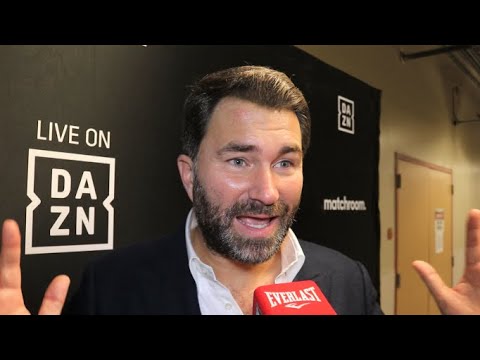 
« Joe Joyce: ‘I want to fight Fury before Whyte does’