Joe Joyce: ‘I want to fight Fury before Whyte does’

By Charles Brun: Joe Joyce says he’s ready to step in front of WBC interim heavyweight champion Dillian Whyte and take the fight with champion Tyson Fury for his next fight in February or early March 2022.

Top Rank wants Whyte to agree to less than the 55-45 split that the World Boxing Council says interim champions can get for title fights. They’re looking for an 80-20 split, and it’s doubtful that they’ll budge from that percentage.

Suppose Whyte and his promoter Eddie Hearn are stubborn about it and insist on getting a massive split. In that case, Arum will go with the backup plan to match Fury (31-0-1, 22 KOs) against the 2016 Olympic super heavyweight silver medalist Joyce.

It would be wise for Whyte to look at the big picture and realize that if Fury moves on, he may never get this opportunity again to fight him.

Joyce is ready to face Fury

“If Whyte is reasonable as far as his money, we’re happy to fight him,” said Bob Arum to Fighthype on Tyson Fury’s next fight. “If not, we’ll fight Joe Joyce.”

“To fight Tyson Fury would obviously be a great option, and I‘d love to get the opportunity to be fast-tracked straight in there before Dillian Whyte, unfortunately for him,” said Joe Joyce to iFL TV.

“That’s how boxing works. You never know exactly what’s going to happen until both camps are happy and it’s signed, and you’re past the weigh-in.

“I’m preparing myself behind the scenes, getting in the best shape physically, tactically, and mentally,” said Joyce.

In many ways, Fury vs. Joyce would be the more appealing fight than Fury-Whyte because Joe has a good chin, and he won’t go to sleep if he’s battered by ‘The Gypsy King.’

Goodness knows, Whyte looked terrible in being knocked cold by the ancient 41-year-old Alexander Povetkin last year in their first fight before the Russian caught COVID-19.

That was the last time Whyte fought a healthy fighter, as Povetkin looked like a 50+-year-old in his rematch with Whyte last March after coming back from a bad case of COVID in late 2020.

“We’d still be friends after the end of the bell, but it’s a sport, and it’s a competitive sport where heavy punches are being exchanged that will set me up for the WBC and WBO world titles,” said Joyce when asked if he’ll be able to put his friendship with Fury aside for the fight.

Joe anxious to get the Fury fight

“You’ve got to kind of got to do the job at hand, and you want to beat your opponent and not make it personal or anything. I’ve got plenty of time and respect for Tyson Fury. He’s a great guy, and he’s achieved a lot. I guess he’s the people’s champion.

“I just can’t wait for my name to be mentioned with Tyson Fury, and I could potentially fight him next, and it’s about getting ready. It could be, yes,” said Joyce when asked if he presents the biggest challenge for Tyson Fury right now.

“That all-action, relentless style. It’s going to be one hell of a fight if it gets made, and I’m just looking forward to the chance to show what I’m made of.

“It’s about finding the right opponent, and it’s got to be someone that I’m not going to knock out in the first ten seconds and is also going to be a decent name and established boxer,” said Joyce when asked what type of opponent he wants for his next fight in February.

Whyte will be stomping mad if Joyce gets the fight with Fury rather than him, but he’d only have himself to blame. If he’s not willing to agree to the price being offered to him by Fury and Top Rank, there’s nothing you can do about it. 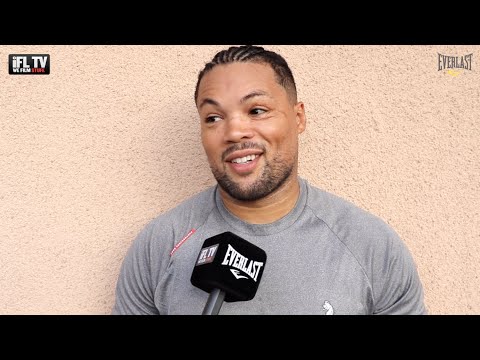