By Dan Ambrose: Juan Francisco Estrada weighed in at 115 pounds for his title defense of his WBC and Ring Magainze super flyweight title, while challenger Roman ‘Chocolatito’Gonzalez weighed in at 114.7 lbs on Friday for their headliner trilogy match on DAZN, this Saturday, December 3rd at the Desert Diamond Arena, Glendale, Arizona.

“On Saturday, the trilogy will be completed between Roman ‘Chocolatito’ Gonzalez and Juan Francisco Estrada will conclude in Arizona. The rivalry between these two are tied up at one,” said Chris Mannix on DAZN’s JABS. 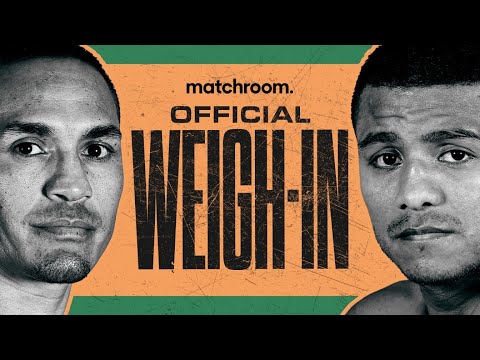 “Gonzalez won back in 2012, and Estrada picked up a disputed decision in 2021, and here they are back again. How do you see this fight playing out?”

“Firstly, I think it’s two-zip for Gonzalez by a razor-thin decision. I thought he did enough in that fight,” said Ade Oladipo. “I see this one going the way of Chocolatito again.

“I’ve been impressed by Chocolatito for a long time. I think you’re looking at a very special fighter here, and I like the way he got rid of [Julio Cesar] Martinez as well. I know Martinez isn’t on Estrada’s level, but he’s a young, hungry kid coming up in weight.

“I thought he was going to cause Chocolatito some problems, but he quickly found out that there are levels to this game. Estrada, in his win over [Argi] Cortes, if it weren’t for that seventh round knockdown, it could have gone the way of Cortes.

“I feel like one is on the way to ascendency [Chocolatito], and ones just staying and has plateaued a bit, and I think that’s Estrada that has plateaued.

“I think that Chocolatito, even though the older of the two, he’s got too much. I think he really has. I have to put my hands up and say when he lost to Rungvisai back to back, I kind of thought Chocolatito, at the top level.

“Then  he fought Kal Yafai, I remember thinking, ‘Let’s see how you [Roman Gonzalez] can do against Kal Yafai.’ A lot of people that look at Yafai’s recent performance and think that he’s not good. Yafai had some good wins.

“Remember, he beat Yashida and beat Gonzalez. The way that Chocolatito played with him, an unbeaten fighter, showed me that there’s a lot left. Even though he’s 35, I think there’s a bit left in Chocolatito. I expect him to get the W,” said Oladipo.

“I think you made a good point there when you said one fighter is kind of ascending, and one fighter is starting to dip a little bit. I think that’s a fair way to look at Chocolatito and Estrada,” said Mannix.

“It is remarkable that we’re saying that Roman Gonzalez is ascending at this point of his career because he has bounced back really nicely in the aftermath of those losses to [Srisaket] Sor Rungvisai, especially the last.

“I, too, had him winning the second fight against Estrada, and I love the way he looked against Julio Cesar Martinez. Now, Martinez, I thought he was exposed a bit as being somewhat of a limited fighter. He’s all offense and no defense.

“Chocolatito just teed off on him and put a beating on him that makes me wonder what Julio Cesar Martinez is going to look like in the aftermath of all that. But watching the fight between Estrada and Cortes, that was an opponent that was put in front of Estrada to make him look great against, and he didn’t.

“That makes you a little bit concerned about where Estrada is at this point in his career. Yes, he was out for a long time, and maybe he had a lot more ring rust than we thought, but he didn’t look good in his last fight, and Chocolatito did.

“Let me ask you this question. Who is this fight more important for? Both of these guys sure seem like they’re headed for the Hall of Fame when their boxing careers are over, but as we head into the trilogy, who needs this win more?” said Mannix about Gonzalez and Estrada.