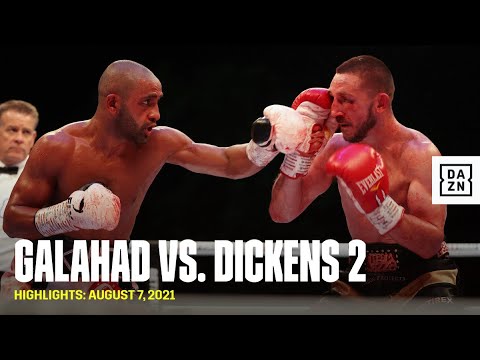 In the co-feature, British Heavyweight champ Fabio Wardley stopped WBO International champ, Nick Webb near the end of the first round.

In the first round, Galahad switched to southpaw and back to orthodox twice against southpaw Dickens who suffered a cut on his left eyebrow, with Galahad taking a close round.

In the second through the fifth, Galahad out-landed Dickens, who was warned several times by referee Michael Alexander for holding. In the sixth round, Dickens was bleeding from eyebrow and nose. Galahad warned for stepping on the foot of Dickens.

In the seventh round, after half a minute, Dickens landed his best punch up to that point, a lead left on the chin of Galahad. Galahad controlled the action except for a flurry from Dickens inside the final minute.

Galahad’s gloves and trunks were covered with Dickens’s blood. Dickens left eye partially closed and bruised under the right eye. In the tenth round, referee Alexander took a point from Galahad for low blows. After the eleventh round, the referee called a halt in favor of Galahad, with Dickens a bloody mess.

“I’ve been waiting 19 years for this to be IBF World Featherweight champion. I am a full-time professional and don’t take a day off. I’m over the moon and want to thank Eddie Hearn for all of this. I want to thank Brendan Ingle, who helped me stay out of jail. I had nothing”, said Galahad. “You will have a title defense in Sheffield before the end of the year,” said Eddie Hearn. 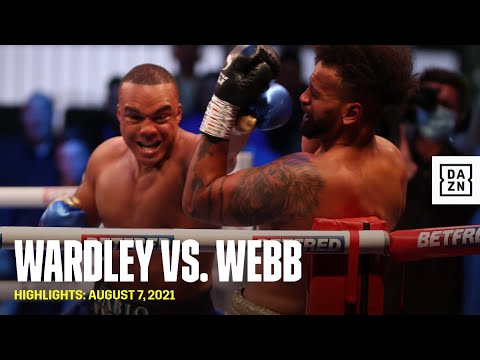 In the first round, it was mostly Webb throwing and landing for the first two minutes, causing a red mark on top of the nose of Wardley. Wardley then started his offense in the final minute landing a flurry of punches having Webb backed into a corner with no return with a final right and left on the chin, and down went Webb causing referee Kieran McCann to wave it off.

In the first round Babic in a slugfest, knocked out the mouthpiece of Bennett’s twice. In the second round, Bennett got a couple of shots in but was out-landed by Babic big time. In the third round, with a minute left, a right from Babic rocked Bennett in this all-out slugfest, with Babic easily taking all three rounds. In the fifth round, Babic continued headhunting, trying to knockout Bennett who had little coming back but still hanging in there. The corner of Bennett called a halt between rounds. Babic won all 5 rounds on this writer’s card.

“I feel good, and thanks for having me. He was such a tough guy. I must have landed a 100 power punches,” said Babic. His girlfriend came in, and he proposed to her, and she accepted! 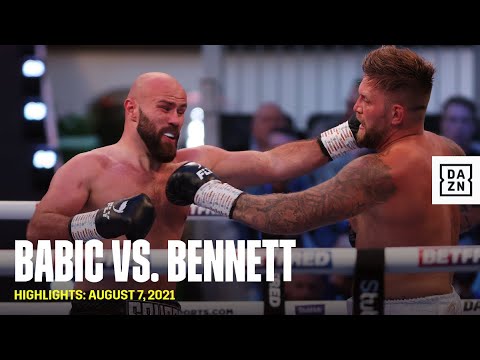 In the third round, a combination from Bridges on the chin of Connolly and down she went for the count. 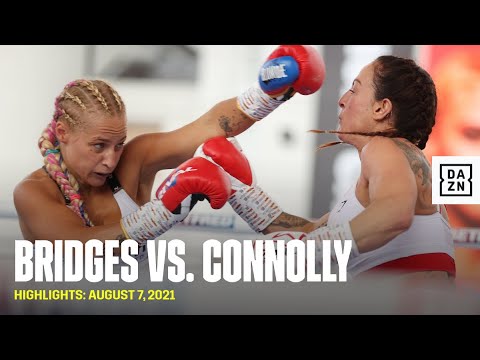 In the second round, Fisher landed a right on the head, knocking Whitaker down and hit him again. After the 8-count, Fisher again scored a knockdown with a right. Upon rising, Whitaker was beaten up by Fisher until the referee wisely called a halt. 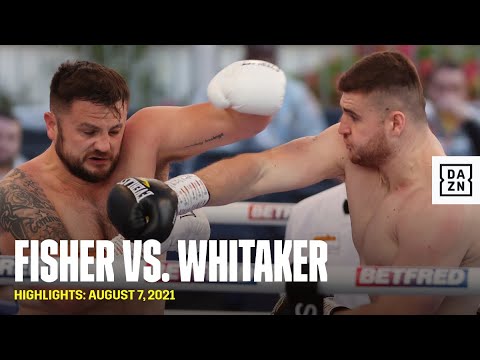 “I felt good in there. Joe Joyce has helped me in there,” said Fisher.

Scores were 77-76 by referee Kieran McCann.