By Barry Holbrook: Kid Galahad (28-1, 17 KOs) wore down Jazza Dickens (30-4, 11 KOs) and stopped him at the end of the 11th round to capture the vacant IBF featherweight title on Saturday night at the Matchroom HQ in Brentwood, Essex.

Referee Michael Alexander pulled the plug in the fight at the end of the 11th when it was clear that the badly beaten Dickens had nothing left in the tank.

Dickens’ face was badly swollen with both eyes almost closed and a cut over his left eye from the first round.

Galahad threw 1076 shots, landing 276 of them. It was brutal to watch how many punches Galahad threw in the fight, which Dickens had no answer for.

There was no way that Dickens could match Galahad’s high work rate. You can argue that the fight should have been halted by the eighth round because it was a one-sided beating Jazza took from Galahad.

“Jazza Dickens will be a champion without a doubt,” said Galahad said. “You saw what tunnel vision I had. Look what I did tonight. 18 months, I went in and smashed him from pillar to post.”

It’ll be interesting to see Galahad take on WBC 126-lb champion Gary Russell or WBA ‘regular’ champion Leigh Wood. Those guys would be tough outs for Galahad, but if he fights the way he did tonight, he can win. 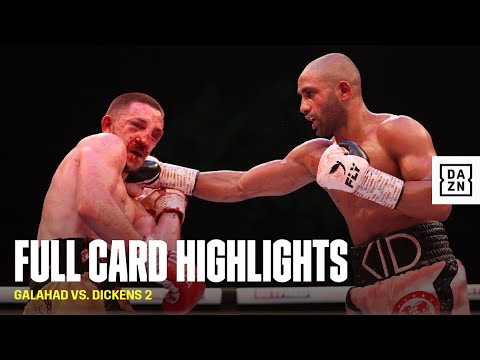