By Allan Fox: Floyd Mayweather Jr will be pulling in $50 million to $100 million for tonight’s exhibition against YouTuber Logan Paul on Showtime pay-per-view at the Hard Rock Stadium in Miami Garden.

Some fans believe that Mayweather has sold his soul to money and no longer cares about the product that he’s selling to the fans. Tonight’s fight will be bought by the gullible, who actually think Logan has a chance.

That’s excellent for the 44-year-old Mayweather, who is old, slow, and totally shot as a fighter. The hand speed that Mayweather once had is completely gone at this point.

Mayweather is like a magic Genie that has lost his power. Let’s be real about this. Floyd looks closer to 60-years-old than he does 40, and you got to wonder how much longer he’s going to be able to fool fans into purchasing his fights.

How much longer will fans purchase Mayweather’s events?

At what point will the fans stop purchasing Mayweather’s events? Will they stop when he comes out using a walker or cane to sell his circus mismatches?

It’s interesting how the fight’s promotion appeared to use a photo of Mayweather taken well over 10 years ago when he was still in his 30s.

Believe me, Mayweather doesn’t look anywhere near like the promotional photo of him on the poster. Mayweather must have been in his early 30s when that photo was taken.

Now all that’s left is an old grizzled-looking Mayweather, who uses his name to hustle fights against a young YouTuber star in Logan Paul.

You can argue that most of the money from PPV and ticket sales will come from Logan’s YouTube fans, many of them teenagers with no interest or knowledge about boxing. They’re just into Logan and admire him to the point where they’re willing to shell out $50 to watch him fight an old-timer.

I mean, there’s a good reason why Mayweather is fighting YouTubers now. This is all Floyd can beat at this point in his career. If Mayweather faces a real boxer, he’ll get beaten, even if he carefully chooses someone.

The problem is, Mayweather would have to fight a top boxer for him to make money, and he’s too old to defeat real fighters, so this is what we see now from him. Mayweather can beat YouTubers and MMA guys, but that’s about it.

“I’m giving him a strong chance of winning this thing,” said Shannon Briggs to Fighthype in talking about Logan Paul. “I trained the dude. He’s strong. I don’t like this fight for Floyd. I’m serious. I’m keeping it real with you.

“He fights crazy, and that threw him off,” said Briggs about Logan losing to KSI in 2019. “He fights better with dudes that don’t have a style like that. KSI was unorthodox.

“I don’t like this fight for Floyd. With the way Floyd fights, he’s got to go forward. When he goes forward, this man [Logan] will be right there with that long jab,” said Briggs.

“Logan feels his size is going to make a difference in this fight, but inside the ring, he’s going to be like a fish out of water,” said Antonio Tarver to Fighthype.

“There are so many things going on in there with a split second of time, and if you don’t have experience, it’s hard to land. Once he [Logan] realizes he can’t land that punch he wants to land, the reality is going to set in.

‘This is an exhibition, so I can’t be too deep in it. That means I can’t look at it as a real fight. This is Floyd’s stage, and he’s going to try and control everything going on in that ring,” said Tarver.

Tarver and Judah clearly see tonight’s exhibition for what it is, and they’re not willing to go into fantasyland to predict a victory for Logan.

For anyone that watched Logan’s pro debut against KSI two years ago, they know full well he stands no chance of winning against Mayweather. Logan has no ability in the boxing realm.

Yeah, Logan is big, muscular, and young, but he’s uncoordinated, slow, and his stamina is bad that it makes this writer wonder whether he’s had a good check-up for his cardio.

Logan seems to hold his breath when he’s throwing punches, and that might be one of the reasons why he gasses out so quickly.

Logan Paul has no shot at winning – says Malignaggi

“I wouldn’t call this a good fight. I would call it a fun event,” said Malignaggi to The Schmo about tonight’s Mayweather vs. Paul match. It’s more of an event. It gets people’s curiosity.

“Logan Paul is bigger, probably has no shot to win, but most people that are watching the fight don’t know that. That’s why I call it a ‘fun event.’ In a boxing event, you have more boxing heads that are in tune with the fight.

“This is just a regular fun event because the people watching the fight are probably not in tune with the fight or the fight game.

“They’re coming with a little bit of hope that Logan Paul might win. I don’t think he has a prayer, but it’s an exhibition. Just him lasting the distance would be a moral victory.

“At least Jake [Paul] is fighting real fights. They’re going on his official record. It makes me think of something Dana White said. He said that YouTubers becoming the most popular boxers says a lot about boxing. Y

“It’s a new wave of boxing, a new wing of boxing, but it refuses to include boxers [except in the case of Mayweather vs. Logan Paul].

“So you’ve got these YouTubers making headway fighting boxing matches, but they refuse to fight boxers,” Malignaggi said.

It’s so obvious that Logan has no chance of winning that it’s not even funny. This match is pathetic, and, shockingly, Mayweather is actually selling this slop to the public. It’s like going to a restaurant and being told that they’ll be selling spoiled steak, and you happily buy it anyway.

YouTubers have found a niche in this dumb generation

“Obviously, if they fight boxers, it’s not going to end well for them,” said Malignaggi.

“Listen, it was cool at first, I think the Paul brothers do put in the work, but now you’re starting to get these other YouTubers and these other Tiktokers.

“Everybody is realizing that ‘if I can get a following, I can go do a boxing match, and people are going to watch it.’

“The reality is, that more people are watching these kinds of fights than people that have been boxing their whole life and have the credentials says more about how stupid the generation is than about boxing than anything else.

“At least with celebrities, they know what they’re about. They’re not trying to pitch themselves as fighters.

“I even don’t have so much of a problem with the Paul brothers. They put in the work, and they put years of work into this. I have a problem with everybody else just showing up,” said Malignaggi.

The Paul brothers have millions of subscribers to their YouTube channels to sell their celebrity boxing matches to their fans. They could be selling anything, and their loyal fans would still purchase it. Mayweather is taking advantage of its popularity to make a quick buck.

This can’t go on forever, though, as the fans will tire of these mismatches quickly, and the Paul brothers and Mayweather will get diminishing returns.

Until then, we’ll be seeing a lot more of these non-sporting fights, and it’ll be a race to the bottom in terms of quality. 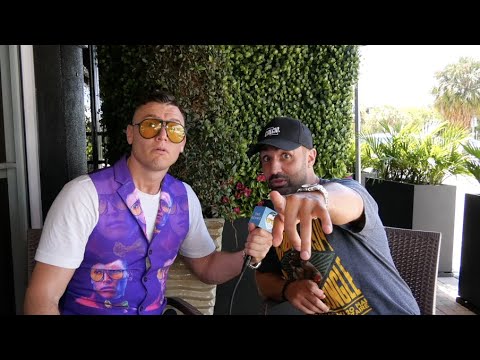