By Barry Holbrook: Daniel Dubois is targeting WBA ‘regular’ heavyweight champion Trevor Bryan for his next fight after stopping Bogdan Dinu in the second round on Saturday night to win the interim WBA title at the Telford International Centre, Telford, UK.  Dubois, 22, landed a big right hand to knockout Dinu (20-3, 16 KOs).

Dubois (16-1, 15 KOs) and his promoter Frank Warren will be waiting on the World Boxing Association to order the fight with the unbeaten Trevor Bryan (21-0, 15 KOs). If they take their time ordering the fight, it could take years for Dubois to get his title shot.

Bryan recently came off a 2 1/2 year layoff to defeat 42-year-old Bermane Stiverne by an 11th round knockout on January 29th. Surprisingly, that was Trevor’s first title defense of his WBA belt that he won in 2018.

Without the WBA helping Dubois out by ordering the fight with Bryan, he could be waiting for a long time before he’s given his mandated shot.

Dubois got rid of the demons

“When he catches you right, you go, and he done what he had do to, and the result of that with the match we made, I thought it was a good match, he’s now the WBA interim champion,” said Frank Warren to iFL TV about Daniel Dubois’ win over Bogdan Dinu.

“He proved what he was made of, and that was the important thing tonight,” said Warren of Dubois.

“He used the phrase, ‘getting the demons out of his system,‘ and he did it. That’s what true fighters do,” said Warren.

Dubois was stopped in the 11th round by Joe Joyce in his last fight in November. Joyce was able to withstand an early assault by Dubois to slowly wear him down with his powerful jab until he quit on one knee in the 11th due to an eye injury.

When Warren was asked about matching Dubois back up with Joyce, he mentioned that Joe is going the WBO route to get a title shot.

“I hope they do. That’s what we agreed that would happen before the fight,” said Warren when asked if the World Boxing Association will order a fight between Dubois and WBA ‘regular’ champion Trevor Bryan. “We’ll push that and see if we can get it over the line.

“I’m coming back on my feet, and I’m ready to take over,” said Daniel Dubois to iFL TV after his win over Dinu. “There were a bit of demons in my head, but once I got in the flow of things, I just let go.

“I thought in my mind, once I hit him good and proper, he’s going to go. Whoever next, whoever they bring up for me, I’m ready for them,” Dubois said when asked if Trevor Bryan will be next. 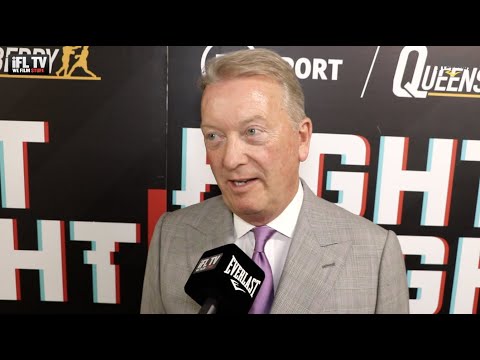