Mayweather Promotions CEO says Gervonta Davis vs. Mario Barrios is a fight he doesn’t like

By Jim Maltzman: Mayweather Promotions CEO Leonard Ellerbe revealed this week that it wasn’t his idea for Gervonta ‘Tank’ Davis to go up to 140 to challenge Mario Barrios for his WBA ‘regular’ light welterweight title next month on June 26h.

Ellerbe says it was the former two-division world champion Davis’ idea alone to face the towering 5’10” Barrios (26-0, 17 KOs), and he doesn’t like this fight.

Although Ellerbe has no problems with Davis (24-0, 23 KOs) taking dangerous opponents, he’s not happy with his choice of facing Barrios. In other words, it’s not a move that Ellberbe would have made for Gervonta.

The 5’5 1/2″ Davis is going to have to figure out how to deal with the height of the 5’10” Barrios, as well as his six-inch reach advantage.

Considering how badly Davis struggled in the first five rounds against his last opponent Leo Santa Cruz, he could lose.

“That’s a tough a** fight, I’m not going to front and fake, and I’m going to be very honest. This is a fight that I do not like,” said Mayweather Promotions CEO Leonard Ellerbe to Fighthype on the Gervonta Davis vs. Mario Barrios match.

“It’s a very dangerous fight [Davis vs. Barrios]. It’s not that I have a problem with dangerous fights. But it’s a big risk that he’s [Gervonta] taking moving to a whole another weight class, but I’m confident of anything that he does.

“It’s just not something that from the promoters side that I would be raising my hand and screaming saying, ‘Let’s go do that.’ This is what he [Tank] wants to do, and we support him 1000%.

“And I’m very confident that he’ll go in and get the job done, but it’s a very dangerous fight. 1000 percent,” Ellerbe said when asked if it Gervonta that wanted to fight Mario Barrios. “He came to me and Al [Haymon] both saying this is what he wants to do,” said Ellerbe.

If Barrios can utilize his height and reach advantage, he could beat Davis. That would be a massive career setback for Tank Davis, who would be sent packing back down to 135.

“We hope everything goes well with Ryan Garcia, and we hope he gets better and healthy, but that was all cap that he was talking about,” Ellerbe said about his belief that Ryan Garcia not being serious about wanting to fight Tank.

“I enquired about it and spoke to his promoter, and they said he had other plans,” Ellerbe said when asked how close it came to a fight between Tank Davis and Ryan Garcia happening.

“Those were his exact words. The fighter [Ryan] is saying one thing but his team [Golden Boy Promotions] is saying something completely different. All cap [from Ryan Garcia].

“That’s okay. Tank is one of the biggest stars in all of the sport, Tank doesn’t need Ryan Garcia. No, there’s no disappointment because I never had any expectations that the fight was going to happen anyway.

“Until you see signatures. The fighter is saying one thing because he’s [Ryan Garcia] is extremely into whatever he’s into. He came out and expressed that he was going to do this [to Tank Davis] in two rounds.

“It sounded good, and some of you believed it, but I never believed it. I believe in dealing with facts, not people’s opinions, and acting on emotion. Deals don’t get made out there by talking about it,” said Ellerbe.

It does appear that Ryan Garcia never had any true intention of fighting Tank Davis.

Many boxing fans believe this was a strategic move by Ryan to increase his followers on Instagram and Youtube in a passive way by clout-chasing.

You can see that it worked, as Ryan got a lot of attention from boxing and picked up more followers on social media. 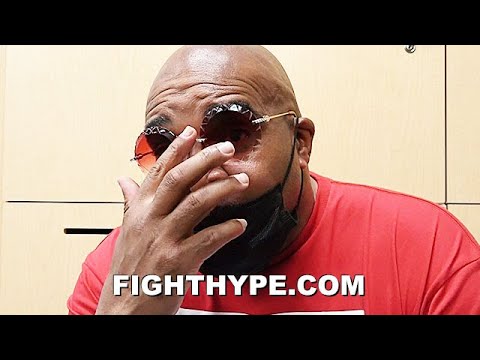 Josh Taylor: Jose Ramirez is vulnerable, he’s going to be easy to find »