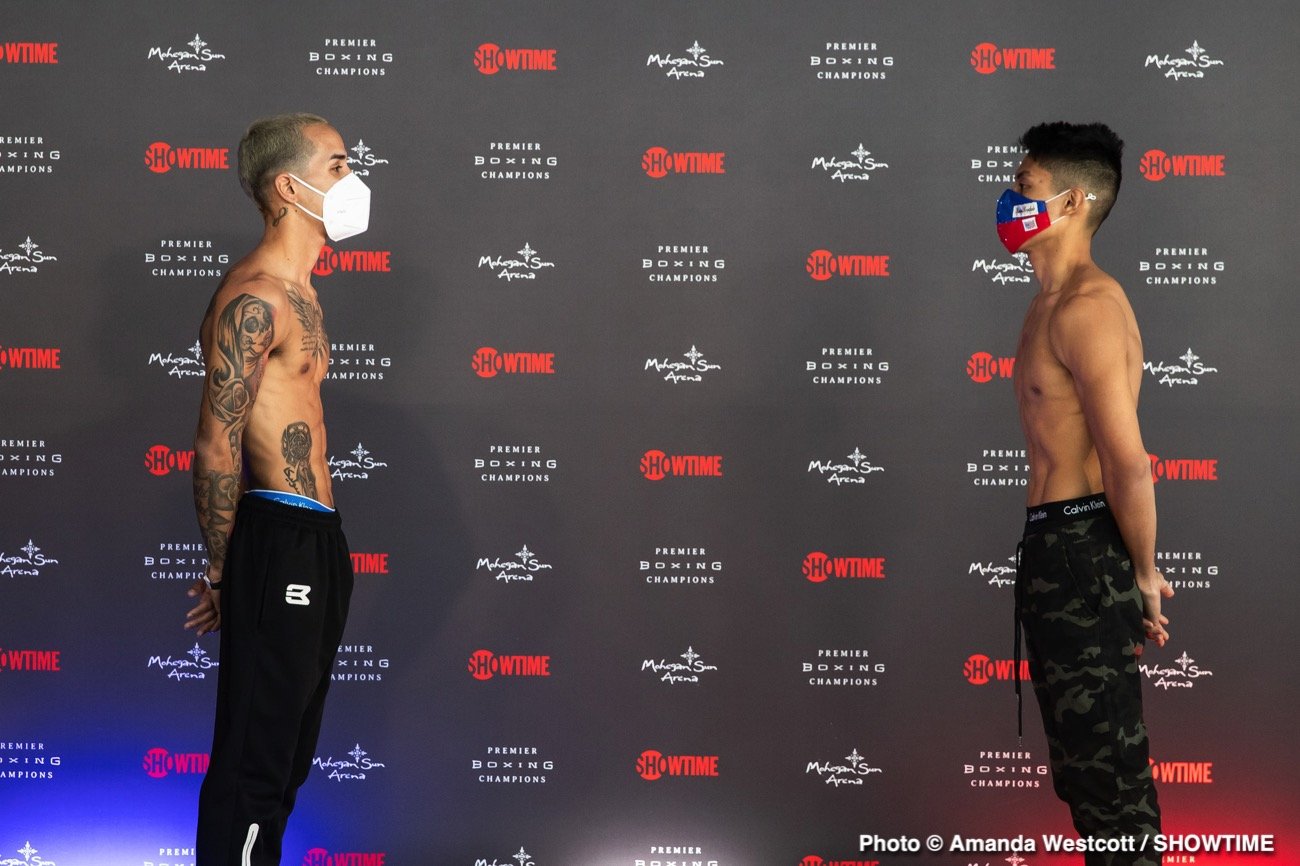 Also previewing their respective matchups taking place on the telecast beginning at 9 p.m. ET/6 p.m. PT were welterweight Jaron “Boots” Ennis and veteran contender Chris van Heerden, who meetin the 12-round co-main event, plus unbeaten bantamweight Antonio Russell and former world champion Juan Carlos Payano, who kick off the telecastin a 10-round duel.

“I feel great right now. I’m physically and mentally in great shape and ready for whatever comes Saturday night.

“My training camp and my preparations for the fight really haven’t been impacted much with the change in opponents. They are similar fighters. The only difference is that Gaballo is younger and Nonito is more experienced. But it’s still a tough opponent in front of me that I’ll be ready for.

“I don’t believe that there’s much difference between Nonito and Gaballo. Gaballo tends to open up a little bit more than Nonito does, so it’s easier to connect on him. He is probably a little more aggressive than Nonito and his defense isn’t as good. I think Nonito would have been a tougher fight than Gaballo but I am not taking this fight lightly.

“We’re prepared for whatever comes. If it goes 12 rounds, I’m ready for all 12. He’s going to have his game plan, and we’re going to have ours, and I’m confident that I’m going to come away with the win.”

“I’m so focused on this fight. It’s been a year and a week since my last fight so I’ve just been in the gym, even when I didn’t fight for a place. I’m always in shape and training at all times.

“When they said I could be the replacement for Nonito Donaire, I did not hesitate to say yes. I was supposed to fight Juan Carlos Payano on August 1, but that fight was canceled. Then it was Jose Velasquez before they asked me to fight Rodriguez.

“Rodriguez is a good fighter and this is a good fight for us. My team has been like a family to me and it makes me look forward to staying in the gym and working hard for them.

“There are some really good bantamweights, and I want to be considered one of the best. You have Naoya Inoue, Nonito Donaire, and John Riel Casimero. Those are the guys I envision fighting in the future. I know them and have sparred with them, so I’m excited to be included in that group of names.”

“I’ve always had this power ever since I was in the amateurs. I don’t look for the knockouts; I just go in there and have fun and be the best version of me. I listen to what my Dad says and follow the game plan, and the game plan nine times out of ten results in a knockout.

“I feel like Thomas Dulorme had the bigger name. More people know him because he fought more top guys. But Chris van Heerden has a better record, so I think it’s even, all things considered. I know he’s fought Spence but I’m not worried about comparing my performance to how Spence did. I’ll let the media and the fans do that. I’m going to go in there, have my fun, and I’m confident that I will get the win and get the knockout.

“After I put on another show Saturday, I feel like some guys are probably going to shy away from me. But at the same time, some guys may want to fight with me because they see I’m starting to become a big attraction and a big draw. I’m up there in the rankings, so that’s why I respect van Heerden for taking this fight. After Dulorme dropped out, he was the only one who wanted to take the fight.

“Without looking past van Heerden this Saturday, I feel like I’ve been ready for the top fights since I’ve been about 18-0. We’ve been trying to get them, but now I feel like I’m getting closer and closer. After I make a big statement on Saturday, I believe I’ll be able to get those big-name fights. I’m at the door, and in 2021, I’m knocking down the door.”

“Jaron Ennis is clearly a ‘hot’ name right now, but he’s been very untested. I’m smart enough to know what works and what doesn’t in the ring, and I won’t make the mistakes that he’s been able to capitalize on with other opponents.

“It only seems like I took this fight at the last minute, but I’ve been training very hard for the last few months in Los Angeles because my manager Peter Kahn had a couple of options brewing for me. I moved my camp to South Florida the last couple of weeks where I got excellent sparring with young lions Xander Zayas and DeMichael Harris.”

“I’m very thankful to SHOWTIME and Premier Boxing Champions for providing me with this opportunity. Come Saturday night; I’ll be well prepared for victory and am very much looking forward to being in the ring with Jaron Ennis.”

“Payano has more experience than me. I haven’t been 12 rounds before, but I have been 10 rounds and up to 14 rounds in the gym. But 12 rounds on a Saturday night is different. With no offense to him, I am more talented. He is the shorter guy, and he will come after me to make it rough, so we are prepared for that.

“I took this fight on short notice, but we stay in the gym. I was actually preparing to fight Emmanuel Rodriguez, who is fighting in the main event, so I was preparing for a right-handed fighter when I was sparring. When it came down that Payano was my opponent, I had to find some southpaws to spar. Luckily my younger and older brother are both southpaws, so I sparred with them a lot over the last three weeks.

“On Saturday night, my dad, my older brother Alan and the WBC Champion, Gary Jr., will be in my corner. I wouldn’t have it any other way.

“I feel good with any top opponent after this: Emmanuel Rodriguez, Nonito Donaire, Naoya Inoue, Guillermo Rigondeaux. As long as I have the time to prepare, I will get in there with anyone. That’s why I am in the sport of boxing to fight the best.”

“I believe that I’m a top-five fighter in this division. I always give my best, and my best is still at a very high level. I feel that I belong in the best fights, even though I haven’t been a champion for a while, because I’ve been a champion before.

“Everybody knows what I bring to the table as a competitor. It’s up to Russell to prove that he belongs at this level and that it’s not just his family name.

“The Danny Roman fight was not that long ago, and that type of conditioning doesn’t go away overnight. I didn’t take more than two weeks off after that fight. I am very excited to be fighting again on SHOWTIME, which is becoming my second home.

“Russell is very talented, but so am I. I have two Olympic tours, 480 amateur fights, and I’ve fought the best in the division. You don’t do that without skills. Maybe today Russell’s skill is better now, but I have more experience. I will use my experience, skills, and ring IQ, and hopefully, we don’t get bad judging as we did against Danny Roman.

“I’ve almost fought Reymart Gaballo a few times. When I fought Mike Plania, it was actually supposed to be Gaballo. And then a couple of other times I’ve been supposed to fight him. So I’ll be looking forward to watching his fight. I expect good things from him, and I’d love for him to win the title so that I can fight him for a meaningful outcome.”

ABOUT RODRIGUEZ VS. GABALLO

The action-packed tripleheader will feature unbeaten welterweight Jaron “Boots” Ennis taking on his toughest opponent to date in veteran contender Chris van Heerden in a 12-round co-main event. Plus, unbeaten bantamweight Antonio Russell will face former world champion Juan Carlos Payano in a 10-round showdown to kick off the telecast.

Dillian Whyte wants Luis Ortiz in February, then Povetkin in May »