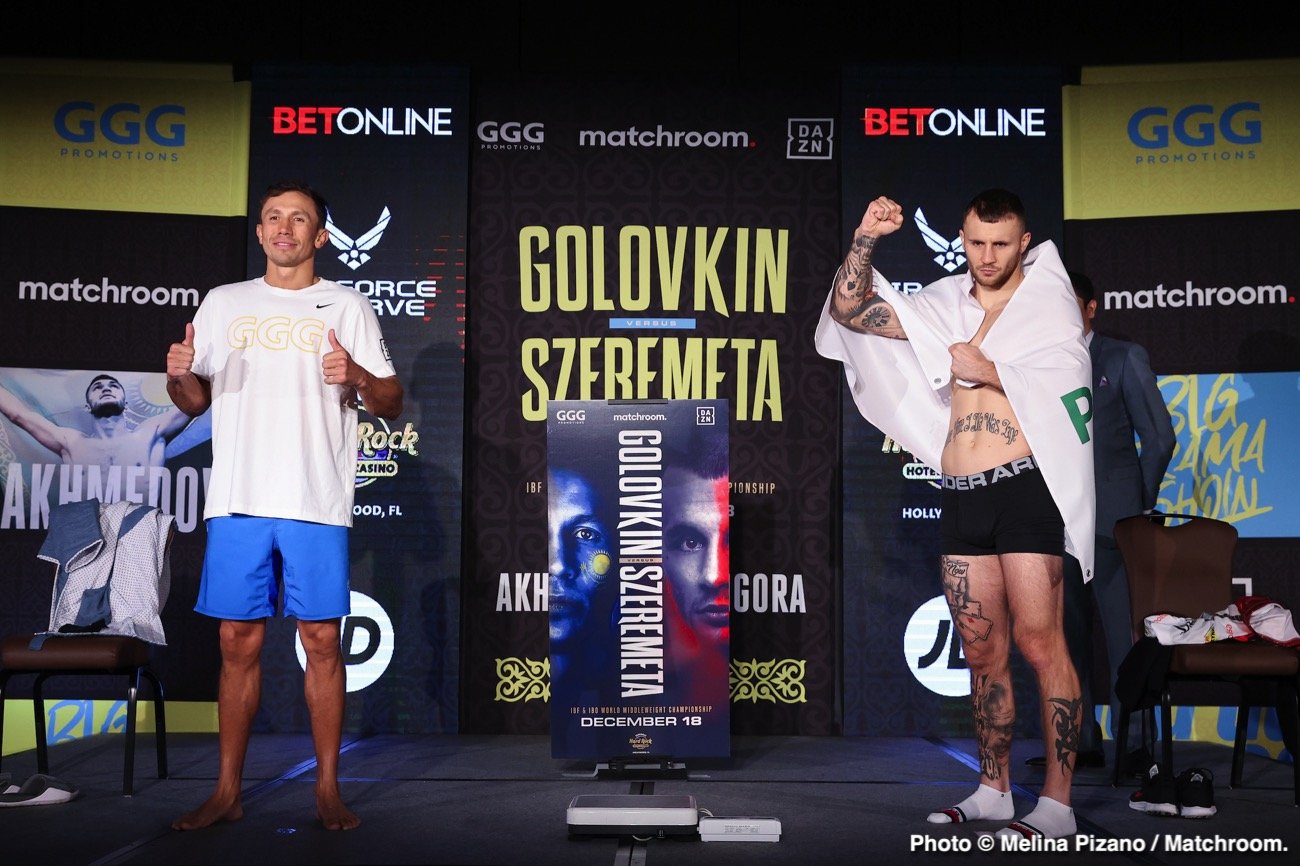 By Barry Holbrook: Gennadiy Golovkin and challenger Kamil Szeremeta took part in a press conference to talk about their fight this Friday night on December 18th live on DAZN from the Seminole Hard Rock Hotel and Casino, Hollywood, Florida. Golovkin and Szeremeta are expected to make their ring walks at 8:00 p.m. EST / 5:30 p.m. PST.

Golovkin (40-1-1, 35 KOs) will be defending his IBF middleweight title against his mandatory challenger in the main event.

There’s not a great amount of interest in this fight from the boxing public, but it is a mandatory defense rather than someone that GGG hand-picked.

Golovkin wanted to hold onto his IBF title, so he had no choice but to take the fight. GGG might have felt that he needed the title so that it would help his chances for a fight against Canelo, as the Mexican star remarked not long ago that Golovkin would need a title for him to be interested in facing him.

Well, now Golovkin has a belt since last year, and Canelo is still not fighting him. Canelo took one step further by saying that he’s not going to bother with Golovkin until he unified the 168-lb division, which could take a while.

If Canelo is serious about what he says, Golovkin will need to wait, but he’ll be fine as long as he keeps taking chances.

Golovkin worked on his power for this camp

“I tried to broaden my scope, and a special emphasis was made on my power training,” said Golovkin. “I feel I’m ready for this fight. People will realize this Friday that the fight will be a historic fight for the middleweight division.

“I wish it had taken place earlier. I first need to win on Friday night, and then look towards other opportunities.

“Yes, I do hope to have more fights in the year, but it obviously it was closed by the pandemic. Hopefully, it’s getting better and we’ll have the opportunities to fight more,” said Golovkin.

“It is very important because it’s a record-breaking defense, and it’s very exciting for any athlete to set a new record,” said GGG. “It doesn’t matter if it’s a 21st defense or some other number. It’s the fact that you’re setting a record is something that pleases you.

“I treat every fight very seriously, and at this level, there are no easy fights. When you are a champion, you realize that very opponent brings certain challenges, and I take training very seriously.

“I hope the more I train the easier it will be for me during the fight. It’s difficult to say if I’m in my prime or not, but during training when I’m sparring, I feel great, and I feel as strong and as powerful as good stamina as I had five years ago maybe even better.

“Of course, it would depend on the demand for those types of fights,” said GGG when asked if he’d be interested in a celebrity match.

“They’re very attractive in terms of the commercial point of view as well, and I believe I would be open to an opportunity like that.

“I’ve always wanted as many fans as present at a fight as possible, and I make certain steps for more people to see the fights. We need to adjust to no crowd present,” said Golovkin.

Szeremeta to force Golovkin to fight his pace

“We know we cannot cheat time, and we know his prime is behind him, but he’s still an extremely dangerous fighter and I have to remember this all the time,” said Kamil Szeremeta about Golovkin. “There is no pressure on me. I’m just going into the ring to beat him.

“There were a lot of moments I was doubting this thing was going to happen, but anytime I was losing motivation, I was looking at my kids, and the motivation came back right away.

“First of all, GGG looked the way he looked because Derevyanchenko was so good. This was a great fight by Sergiy. I was looking at this fight to be like Derevyanchenko, but I want to up the tempo more.

“A little bit more than Derevyanchenko did because it was very close for him to beat Gennadiy that night. A lot of people when fighting GGG, they go backward.

“You cannot fight going backward against GGG because this is what they do all their lives.

GGG will be facing a highly motivated Szeremeta

“All the focus is on Friday night. Everybody got to witness two tremendous fights between GGG and Canelo, and who knows what the future holds,” said promoter Eddie Hearn.

“All that matters is Friday night with Kamil Szeremeta. In terms of the selection of the opponent, when you’re a champion, you have to make mandatory defenses.

“Szeremeta is the mandatory defense, he’s an undefeated fighter, he’s a very good fighter ready for the challenge, and he’s very hungry.

All these fighters rise to the occasion when they fight a great fighter. It doesn’t matter if it’s Joshua, GGG, Canelo; all of these guys rise to the occasion because a victory over a guy like Gennadiy Golovkin would be the ultimate achievement for Szeremeta in his country in Poland, and everybody back home.

“The Canelo stuff, that’s the future. What matters is Friday night, defend his title, make a record-breaking defense, and get business taken care of,” Hearn said.

“Demetrius Andrade is desperate for a fight,” Hearn continued. “It’s difficult when champions like Charlo saying, ‘All I want to do is unify, and I want to do is what my brother did,'” said Hearn.

“I’m reaching out to those guys, ‘Look, we’ve made you huge offers to fight on DAZN. That may be difficult for you, but we’ll do the fight on FOX and Demetrius will probably cost you less money than Derevyanchenko.

“You say you want to unify. Here’s a fight for you. Demetrius has always struggled with people not wanting to fight him.

“I believe Gennadiy would fight him. The one that thing Demetrius has at the moment is a world championship belt, and if he didn’t have that belt, it would be even more difficult to get him a fight.


« Callum Smith is ready to shock the world