By Allan Fox: Floyd Mayweather Jr. dropped a bombshell on Thursday in announcing that he’s now become a trainer, and say he’s been inspired by the recent passing of his uncle Roger Mayweather.  Floyd, 43, is saying he’s going to be “one of the best trainers in the world.”

If that’s going to be the case, then Floyd will need a lot of patience because he can’t expect all the fighters that he trains to have his kind of talent or his dedication. He’ll need to understand that a lot of fighters won’t pan out for one reason or another.

Will Mayweather stick it out as a trainer?

Floyd is currently training his 14-year-old nephew, who has no experience in boxing. Former five-division world champion Mayweather (50-0, 27 KOs) certainly has the pedigree and the knowledge to be an excellent trainer.

What we don’t know is if he’ll stick it out because it’s a grueling job, and time-consuming. Mayweather won’t be able to travel the world as much if he’s busy training young fighters seven days a week. Mayweather’s uncle Roger sunk his life into training after his professional career ended in 1999. 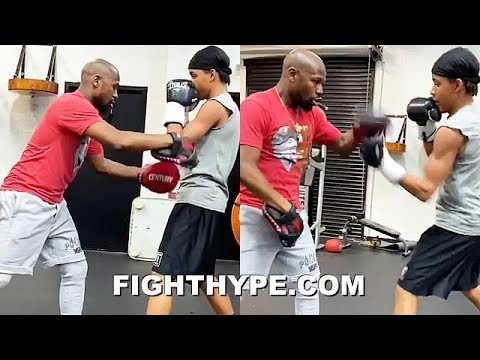 “It has become a goal of mine to become the best version of themselves,” said Mayweather on social media. “I want to do my part on this earth to help people see the potential in themselves so that they can share it with the world.

“Due to the passing of my uncle [Roger Mayweather], I’ve felt inspired to help those around me the same way they’ve been there for me throughout my boxing career. I’ve incredible trainers, which included my dad and uncle.

“I am new at training, and so far, I’ve been working with people with no boxing experience. Therefore, we are growing together. But I promise you; I will be one of the best trainers in the world. Inspire and be inspired.”

Mayweather currently promotes WBA lightweight champion Gervonta Davis, who he has given a lot of tips. But Mayweather can’t be given credit for Davis’ talent. Tank Davis came to Floyd already an incredible talent, and he wasn’t someone that was developed by Mayweather from day one.

It’s going to be a different story with Mayweather now a trainer. Anyone that he can develop from the ground up into a star, he’ll receive credit for developing. It’s not easy, though. A lot of the famous trainers have great fighters walk int their door, and they don’t grow them from scratch.

Top fighters will want Mayweather to train them

Freddie Roach is an example of that. Manny Pacquiao came to him already a great warrior, and he made a few minor adjustments to make him even better. The same with Miguel Cotto. He was previously a superb fighter before taking on Roach as a trainer late in his career. Roach helped him, but he couldn’t get full credit for the fighter Cotto was.

Being popular, it should help Mayweather get a lot of famous fighters come into his door asking to be trained by him. As long as Mayweather is serious about the job, then he could become of the most prominent trainers in the game. Further, Mayweather’s Promotional company could benefit as well if some of the fighters that he trains eventually want to be promoted by him.

Other than Tank Davis, Mayweather doesn’t have anyone in his stable that you can call a can’t miss superstar in the making.

Two things that Mayweather has going for him is his youth and his popularity. He’s got a lot of time to train fighters, and his reputation will attract talented fighters in the future. What we don’t know is if Mayweather will be able to stick it out in this profession because it’s a hard job. If Mayweather wants to relax, travel, and live the life of a wealthy person, then his role as a trainer could end quickly.

Is Pacquiao still one of the elite fighters at 147? »