By Scott Gilfoid: Carl Froch says Eddie Hearn wants him to do a virtual news conference for a fight that failed to take place during his career against super middleweight champion Joe Calzaghe.

Froch had badgered Calzaghe, always wanting a fight against him during his career, but the champion ignored him. Perhaps Calzaghe was put off by how needy that Froch seemed, and he wasn’t going to give him the time of day. If Froch weren’t so needful, Calzaghe probably would have thrown him a bone and offered him a fight.

Instead of taking Hearn up on the offer, he wants him instead to set-up a REAL fight against severely overweight 47-year-old Calzaghe (46-0, 32 KOs).

What will Froch prove fighting Calzaghe?

Gilfoid doesn’t see how Froch comes out ahead by beating up the horribly out of shape 47-year-old Calzaghe at this point. I mean, it won’t change anything. Back when the two of them were still fighting, the boxing world viewed Calzaghe as the vastly superior fighter than Froch.

Calzaghe accomplished more during his career. Further, Calzaghe beat a guy that Froch LOST to in Mikkel Kessler. Calzaghe dominated Kessler, whereas Froch was outslugged by the Danish fighter.

Former IBF/WBA/WBC super middleweight champion Froch (33-2, 24 KOs) thinks it would be good for him and Calzaghe to fight for real, and he says he’ll end his six-year retirement to do that. For the record, Calzaghe hasn’t fought in 12 years since retiring at the top of his game in 2008.

Since retiring, Calzaghe has packed on a massive amount of weight, and no longer resembles the youthful, athletic champion that beat the likes of Roy Jones Jr., Bernard Hopkins, and Mikkel Kessler.

Strangely, former IBF/WBA/WBC/WBO and Ring super middleweight champion Calzaghe has let himself get so overweight because he always prided himself in being in great shape during his 15-year pro career.

Froch ready to come out of retirement for Calzaghe fight

“Eddie Hearn has come up with this great idea of a virtual press conference of fights that never happened and fights that we wanted to see happen,” said Froch on Fighting. “He sent me a message saying ‘I’m doing a virtual press conference. I’m thinking about getting you and Calzaghe on.’ I said, ‘You’re probably not going to get Calzaghe on because he perhaps won’t fancy it, but I said, ‘Forget the virtual one.

Calzaghe is so incredibly overweight that it might be risky for him to try and trim down to make a comeback against Froch. I would venture to guess that Calzaghe is well 200 pounds now. He looks nothing like the person that he once was, and it’s troubling. Along the weight, Calzaghe looks middle-aged, and not someone that one could picture coming back for an old timer’s fight against Froch.

It would be more sporting if Froch attempted to lure someone like Mikkel Kessler or Bernard Hopkins out of retirement. Those guys might take Froch up on his offer if he pushed hard.

“But someone like Joe Calzaghe, that would be funny,” said Froch. “I don’t want to be horrible or disrespectful in any way, but it’s going to sound disrespectful, but I’m not. Have you seen the state of him and the size of him? His head, I don’t know why it’s swelled up so much, but he looks like he’s a bit of a mess,” said Froch.

If anything, Froch and Calzaghe should compete at bowling or a good game of golf. That would be a casual thing where neither guy would be putting themself at risk.

Calzaghe does look like a mess in terms of his weight. The guy needs to think about getting his weight under control because it’s risky being as heavy as he did. If Calzaghe liked the idea of returning to the ring to fight Froch, he could probably take the weight off in six hard months of training.

It might be risky for Calzaghe to take the fight because he hasn’t been keeping fit all these years, and Froch would have a significant advantage over him right now. 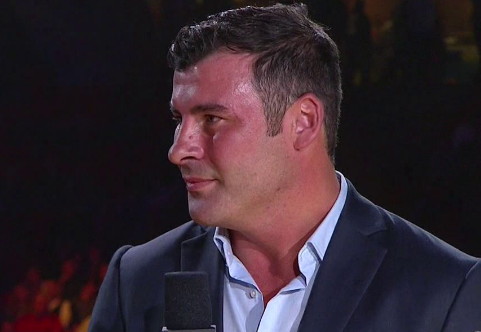 “If he agrees to come out of retirement because of the way I am speaking about him, then I’d definitely fancy a bit of that,” Froch continued about Calzaghe. “But he’s not going to come out because he knows he’ll get absolutely flattened. I’m still in good shape.

“That’s the fight that should have happened but never did. He fought Roy Jones and Bernard Hopkins. Congratulations, but that’s the fight [Calzaghe vs. Froch] that everybody wanted to see. You’re not going to tell me there’s not going to be massive interest. I hear little snippets from Calzaghe, giving me a bit of stick.

“He still has his fanbase that is quite solid and loyal. Whenever they do, ‘who wins: Froch or Calzaghe?’ I always come up on the button 95%. People that are talking aren’t fighters. They’re armchair fans. They say, ‘Calzaghe is retired, too fast, he’s tough, and he’s got fast hands and blah, blah, blah,'” said Froch.

There probably would be a lot of interest in the UK for a fight between Calzaghe and Froch. If they stage this fight immediately after the pandemic ends in 2021 or 2022, the Britsh boxing public will flock to see it.

They would be so starved to see the sport; they might be willing to watch a couple of old geezers like Froch and Calzaghe fight. It would be mindless entertainment with no real meaning. It would be the equivalent of junk food. You’d be entertained for as long as the fight lasts, and then you’d immediately forget it when you get home. There would be nothing else to look forward to between these two guys after the fight.

“There’s no way this fight is going to happen because there’s no way he would even consider coming out of retirement,” said Froch about Calzaghe. “Listen, mate, I’m still in shape, and I’m still fit, solid and strong. I think he’s been partying, relaxing, and he’s taken his foot off the gas. He’s in no fit state. It wouldn’t be fair.

“The only reason I would consider not fighting him is because I’d be feeling sorry for him. I’d be thinking to myself, ‘Can I really do this?’ I didn’t even consider the business side of it. And I don’t think the fights going to happen, but if it did, it wouldn’t warrant pay-per-view. I don’t feel as bad about Calzaghe now.

Calzaghe will laugh off Froch’s challenge, and will continue to ignore him. For Calzaghe, Froch is probably static noise that you hear in the background, and you just want to turn it down and focus on dangerous things.

It’s just unfortunate that Froch ended his career so early without taking some of the significant risks like Calzaghe did. Froch had the chance to fight Gennadiy Golovkin, and he turned it down. I couldn’t see Calzaghe turn down a fight with Golovkin if it was offered to him.

Calzaghe was a different type of fighter than Froch. Andre Ward wanted to give Froch a rematch after beating him, but there wasn’t any interest. That’s another fight that you can’t imagine Calzaghe turning down. Why didn’t Froch want to fight Ward again? 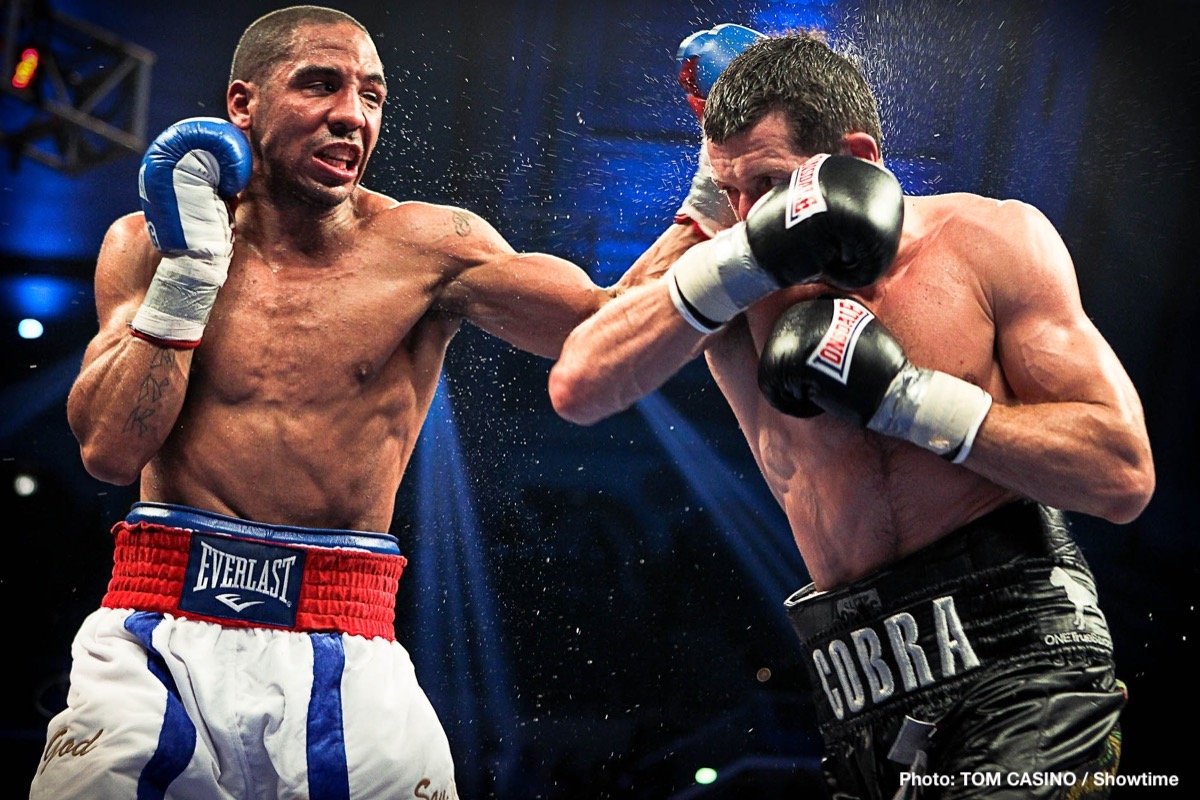 “I don’t get upset when I think about his name,” said Froch in talking about Calzaghe. “He used to wind me up. And he said some things. I was like, ‘Where’s your respect? I’ve got four world titles. I was mandatory for your belt, and you vacated. Can’t you give me any type of credit at all?’ I always give Calzaghe credit.

“He’s a great fighter, very tough, and unbeaten in 46 fights. He’s never given me any props at all, and for that, I’d love to punch him in the face really hard. But it’s a fantasy fight. It’s going to be a fantasy press conference with Eddie Hearn, and if it goes the right way, maybe I’ll coax him out of retirement. If he does, he’ll get ironed out,” said Froch.

As Froch not being bitter, I don’t buy it for a second. He sounds disgruntled about Calzaghe not fighting him. I mean, why else would Froch be calling him out at this point in his life. Calzaghe is striding through his 40s, and almost 50 now.

The condition he’s in right now, it’s worrisome. But why would Froch want to fight Calzaghe now instead of Golovkin or Andre Ward? Those are the guys Froch should be trying to fight. He’s only 43, and he’s not old to make a comeback.

A fight between Froch and Ward would make good money if they staged it in Nottingham. It’s too late for that fight to take place at Wembley Stadium, but it would do well in Froch’s backyard in Nottingham.

It’s doubtful that Froch would be competitive with Ward, though, considering that he would expose all the same flaws in his game that he took advantage of in their fight a decade ago. 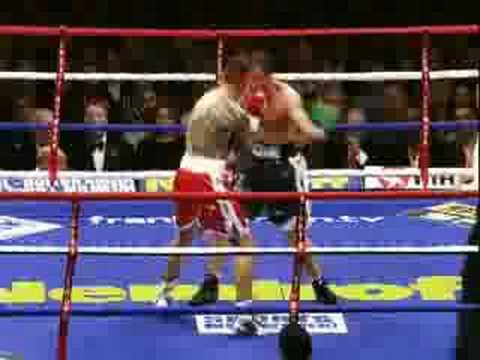 
« Efe Ajagba – A force to be reckoned with in the heavyweight division?