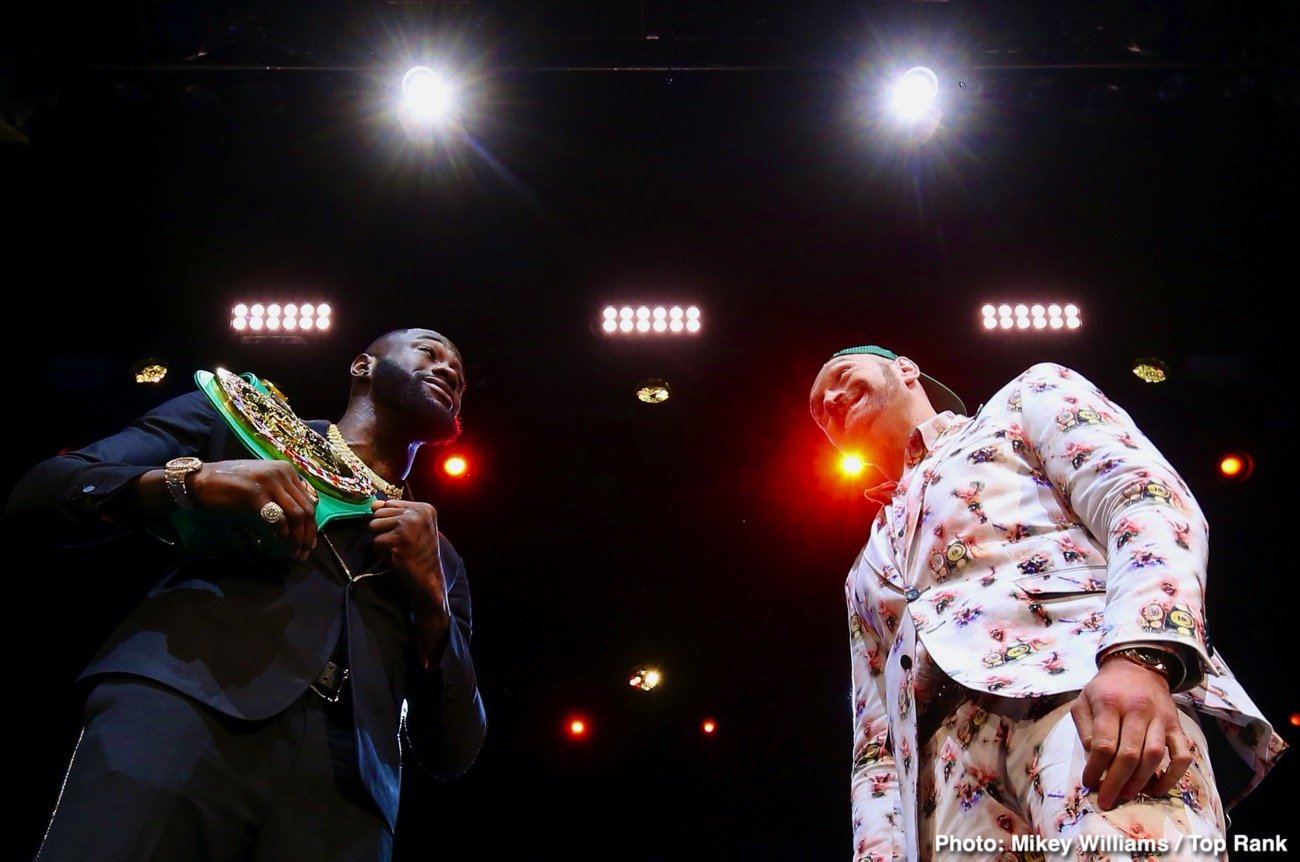 By Charles Brun: Deontay Wilder will be targeting every part of the mountainous 6’9″ Tyson Fury’s large 260+ lb frame on February 22 in their rematch at the MGM Grand in Las Vegas, Nevada.

It was thought that WBC heavyweight champion Wilder (42-0-1, 41 KOs) would be an opportunist and take advantage of Fury’s recent DREADFUL cut that he suffered over his right eye in his last fight against Otto Wallin.

Fury did an admirable job of fighting with the cut in his fight against the 6’5″ Wallin, but he wasn’t fighting a big puncher. The ‘Gypsy King’ Fury didn’t need to be concerned with getting hit by any heat-seeking right hand bombs in the Wallin fight like he will against Deontay on February 22.

Fury could be easy prey for Wilder

With a cut like that, Fury’s right will have in a weakened position in the rematch with Deontay. You can argue that Fury will be partially handicapped against Wilder due to the recent cut. Ideally, Fury’s promoters at Top Rank should have delayed the rematch with Wilder until the 2nd half of 2020, but there’s too much money at stake.

Fury required 47 stitches to close up that wound, and he’s had only 4 months for him to heal since the Wallin fight last September. As such, Fury is going into the Wilder rematch with a lot of new SCAR tissue over that right eye, and it’s going to be a soft target for Wilder’s howitzer-like right hand on the night.

With Fury going into the rematch with Wilder with a pre-existing vulnerability, it puts him in a partially weakened state, doesn’t hit? It’s almost like Fury will be half-stunned already when he steps inside the ring to face Wilder, and that’s not good. It’s bad enough that Fury was already arguably knocked out by Wilder in their first fight, but his situation is now worsened due to his recent cut..

Obviously, you can second-guess Fury’s promoter Bob Arum’s decision to have him take 2 tune-up fights against Wallin and Tom Schwarz. In hindsight, Fury would have been better off taking the Wilder fight immediately rather than waiting 14 months before making the fight.

This was a business move to wait until Fury had built up a bigger fan base in the United States before making the rematch with Wilder. It’s debatable whether Fury’s popularity has increased since his first fight with Wilder. The reason for that is the level of Fury’s two warm-up fights against Wallin and Schwarz wasn’t high enough to raise the needle to increase his popularity to any great extent with U.S fans.

“I’m going for his whole body. His eyes, nose, ears, his neck, his chest. I’m going for everything,” Deontay said to secondsout when asked if he’ll be targeting Fury’s recently cut right eye. “Everything is on the line. He’s 6’9”, there’s a lot of body.

“I’m doing my own thing. If it goes passed it, so beat it,” said Wilder when asked if he’s looking to break Floyd Mayweather’s 50-0 record. “I’m a heavyweight, and he’s in a smaller weight division. Whatever happens, happens. I’m on a path with my own legacy, and building that for my children and my family,” said Wilder.

Unquestionably, it’s smart for Wilder, 6’7″, to not concentrate on just one part of lineal heavyweight champion Fury’s body in the rematch, in that it would limit what he can do. Fury and his new trainers Sugarhill Steward and Andy Lee are clever, and they’ll definitely have a plan in place to prevent him from getting hit on his recently cut right eye.

Those two will likely have Fury going to his left the entire night, jabbing frequently and moving. In other words, they’ll have a whole bag of tricks in place for Fury to utilize on the night to keep Wilder from hitting his tender right eye. For that reason, Wilder is wise for him to not limit himself to dialing into just one part of Fury’s body.

With Wilder’s kind of power, he doesn’t need to be an opportunist to aim his punches at a vulnerable part of Fury’s face. Wilder can hurt Fury with his right-hand shots no matter where he hits him. We saw that last time they fought. Wilder hit Fury on the left side of his head in the 12th, and poleaxed him.

“Really, my thoughts were that they’re weak,” said Wilder to secondsout when asked his thoughts on Anthony Joshua offering to help Fury with sparring. “But on the opposite side of the field is it made me have more confidence. It made me feel superior, because these two British guys are trying to team up against me to get me out of here, to knock me off my reign or my throne. I took the negative side and the positive side, but it’s beneficial to me. It makes me look like a real killer,” said Wilder.

You have to admit it does look mighty weak on Fury and Anthony Joshua’s part that the two are planning on teaming up to try and beat Wilder. The fact that Joshua and Fury feel the need to work as a two-man army to beat Wilder, it validates the opinion that many boxing fans have that he’s the #1 heavyweight on the planet right now. If he wasn’t, Joshua and Fury wouldn’t be so desperate to work with one another to solve the Wilder math problem.

Joshua and Fury may not realize it, but the fact that they feel the need to work together, it’s the equivalent of them admitting that they’re not on the same level as Wilder. There’s nothing wrong with that. If they’re worried about Wilder, and don’t feel they can beat him working in isolation with their own ability, then they need to team up.

This is more about business with Fury and Joshua. They can make a lot of money fighting each other in the UK, and that’s why it’s important that they get the Wilder threat out of the way so that they can rake in all that dough.

“There’s going to be a lot of things said, because they’re not at the table right now,” said Wilder about Joshua’s promoter Eddie Hearn saying he would give him a 50-50 purse split for a fight with AJ. ‘Right now my whole focus is on Fury.

“As we see, when I have a fight lined up, he’s very opinionated about certain things. But when I don’t have a fight, we see him quiet mouthed. So we’ll see that quiet mouth stay quiet after this. We’re focused on February 22. We’re not worried about the outside guys [Joshua and Hearn] right now.

“They will have their time once this fight is over with. We just hope they keep their same energy. There’s no reason to talk about it now because we don’t know who is going to win this thing,” said Wilder about a fight against Joshua.

If Wilder CRUSHES Fury in the rematch, a 50-50 deal for a fight with Joshua may not be possible. Wilder will have made it clear that he’s the #1 heavyweight in the division with that victory, and he’ll be in a position to ask for a better deal. As a result, one can easily predict that Wilder will ask for a 55-45 split in his favor for a unification match against Joshua instead of a 50-50 cut.

Obviously, Joshua’s promoter Eddie Hearn will bring up the fact that he holds 3 titles and Wilder just one. Titles don’t matter in boxing anymore. What matters is popularity, and accomplishment. If Wilder bags the Fury trophy on February 22, then Joshua will be in a position where he can’t match that. He can’t argue that his win over an out of shape 283 lb Andy Ruiz Jr. is comparable to Wilder’s victory over Fury.