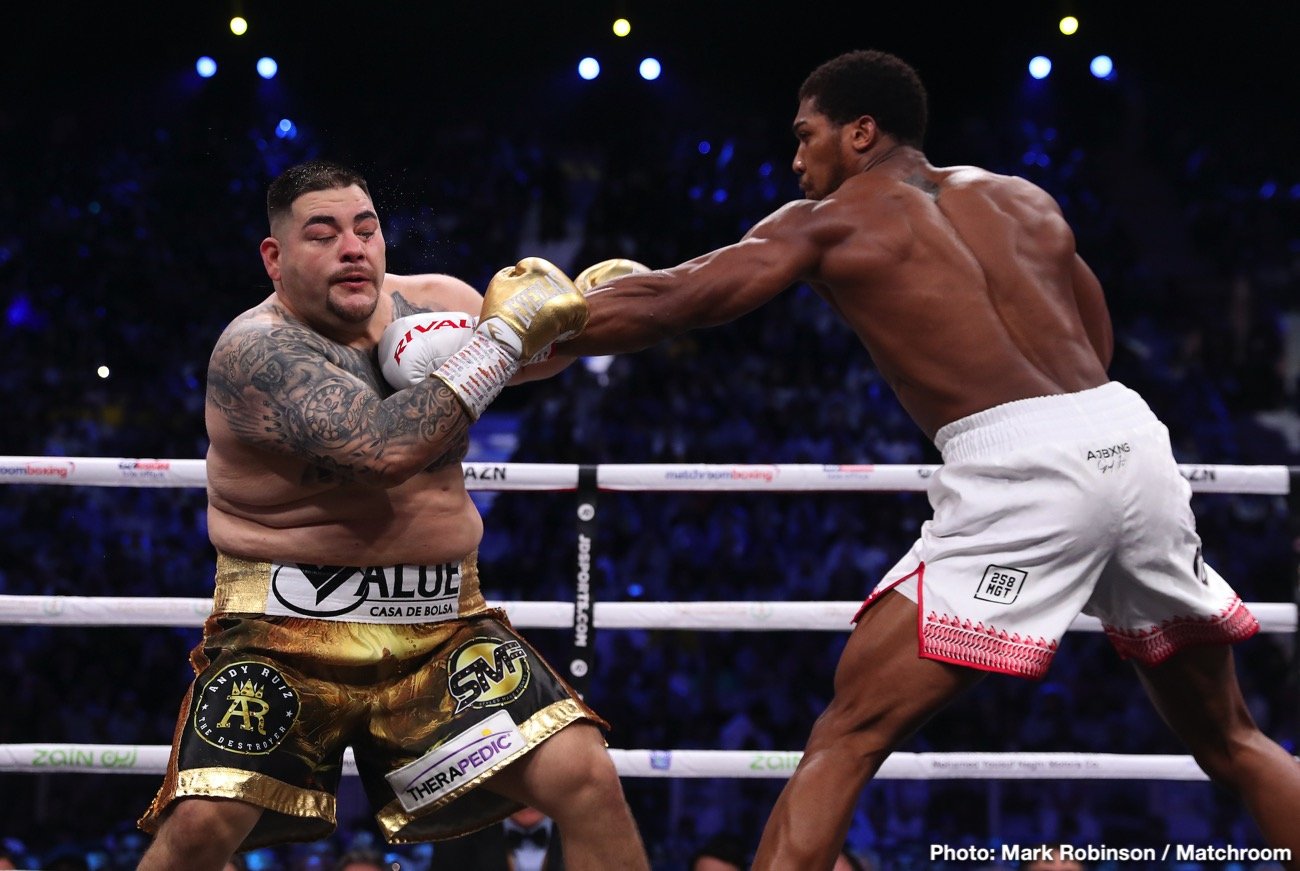 By Tim Royner: Andy Ruiz Jr. asked his fans on social media who he should fight this year, and Matchroom promoter Eddie Hearn quickly commented to his post by saying, ‘Dillian Whyte.’ Hearn BADLY wants the former IBF/WBA/WBO heavyweight champion Ruiz Jr. (33-2, 22 KOs) to fight Whyte (27-1, 18 KOs) to give him his first big name opponent since his 7th round knockout loss to Anthony Joshua in 2015.

Ruiz is coming off of a disappointing 12 round unanimous decision defeat to Joshua on December 7 in Saudi Arabia. With that loss, Ruiz needs a good opponent to bounce back. Whether that’s Whyte or not is the magic question. Whyte didn’t exactly impress in his last fight against Mariusz Wach on December 7, did he? Dillian came into the fight at a career high 271 lbs, and he took massive punishment from the 6’7″ Wach.

Matching Whyte against Ruiz would give the boxing public a fight in which they could compare ‘The Body Snatcher’ to Joshua in giving him a common opponent. If Whyte were to beat Ruiz and do a better job of it then Joshua did, Hearn would likely be over the moon with happiness. As one would expect, it would make the eventual Joshua vs. Whyte 2 rematch much bigger.

This is a weak move on Hearn’s part to try and get a popular fighter for Whyte to face. Hearn choosing to make an offer to Ruiz Jr. public can be seen as a strategic move to show the 31-year-old Whyte that’s TRYING to get opponents for him.

Whyte has been with Hearn’s Matchroom Boxing stable since 2016, and these are the heavyweights he’s fought:

Parker and Rivas are good fighters, but Chisora is little more than a journeyman. As far as the rest of the fighters go, they’re poor, and not world class level fighters. Pretty much all Whyte has to show for himself in the last four years of his career is his fights with Parker and Rivas. Those were both matches that had a degree of controversy attached due to the referees blowing calls, and not addressing Whyte’s rough-house tactics.

For example, Whyte got credit for a knockdown that was a result of a head-butt against Parker. In the Rivas fight, Whyte was hurt by a body shot in the 12th. The referee mistakenly thought it was a low blow, and gave Whyte a chance to recover. Who knows how that fight would have ended if the referee made that mistake. Those fights took place in London.

Luis Ortiz would be a good option for Whyte

Hearn failed to mention Luis ‘King Kong’ Ortiz (36-2, 26 KOs) as a possible option for Whyte’s next fight in 2020. Ortiz is the fight that Whyte SHOULD have taken for him to earn the WBC mandatory position in 2018. The World Boxing Council ordered Whyte to fight Ortiz in a WBC title eliminator, but Dillian opted to fight Chsisora.

By making that move, Whyte made his work to become the WBC mandatory a lot harder. It’s unclear whether Whyte and Hearn felt that WBC would choose to give him the mandatory spot by fighting the guys that he wanted to fight instead of the one that they picked out in Ortiz.

‘King Kong’ Ortiz is coming off of a 7th round knockout loss to Deontay Wilder on November 23, and he would likely be interested in a fight with Whyte if Hearn has an offer that makes sense.

Back to basics 🥊 Who do you want to see me fight this year? Let me know in the comments below ⤵️