By Scott Gilfoid: Eddie Hearn is interested in having WBA light heavyweight champion Dmitry Bivol defend his title against the beleaguered Badou Jack. Bivol (17-0, 11 KOs) needs an opponent for his next title defense, and his promoter Hearn at Matchroom Boxing views the 36-year-old former 2 division world champion Jack 22-3-2, 13 KOs) as  an excellent option.

Nevermind the fact that Jack hasn’t won a fight since 2017, and is starting to look a little older. Hearn thinks it’s a dandy idea for Bivol to defend against Jack.

It might send a bad message to boxing fans and to other contenders if Badou is given yet ANOTHER world title shot right now, considering that he’s coming off of TWO consecutive defeats to Jean Pascal and Marcus Browne. Jack’s record since 2017 is 1-2-2. That’s one win, two defeats and two draws for Jack since his last victory over Nathan Cleverly in 2017. Some boxing fans believe that Jack fought well enough to deserve victories in his fights against Pascal, Adonis Stevenson and James DeGale.

At what point do you say enough already? Jack has come up empty 3 times in fighting for world titles since 2017, and the judges can’t be wrong all three of those fights, can they? It just looked to me like Jack is unable to get out of 1st gear in the first six rounds of his fights, and he falls behind hopelessly each time. That’s not the judges’ fault.

If Hearn wants to invalidate the judges’ decisions in those three fights, and count them as victories for Jack, then it might be okay for him to fight Bivol for a world title. The boxing public might see it a different way, and wonder why Jack is being given a world title shot with him coming off of consecutive defeats.

If Jack gets another title shot rather than hard-working contenders, who have been winning their fights, then it might send a message that the requirements to fight for a title is to fail repeatedly.

Badou fights on a different network

Jack will need his management at Mayweather Promotions to give their permission to take that fight, as he fights on Showtime. Bivol, 29, is with DAZN, and that might make it problematic potentially to get this fight done.

Hearn sent a Tweet out on Friday expressing interest in making the fight between Bivol and Jack. He made sure he included Jack’s promoter Leonard Ellerbe of Mayweather Promotions in the Tweet. Now it’s up to Ellerbe and Floyd Mayweather Jr. to decide whether they want to give Jack permission to take the fight with Bivol.

Ellerbe might want to set-up a rematch for Jack against WBA secondary light heavyweight champion Jean Pascal (35-6-1, 20 KOs) rather than having him take on Bivol. Jack lost a controversial 12 round split decision to Pascal last month on December 28 on the undercard of Gervonta ‘Tank’ Davis vs. Yuriorkis Gamboa at the State Farm Arena, in Atlanta.

Rather than picking a fighter that hasn’t won a fight since 2017 to challenge Bivol, Hearn could use one of his many fighters in his stable as opponent. These are some of the fighters that Hearn has available that could challenge Bivol for his WBA title:

Hearn has been talking up Buatsi, saying that he believes he can win a world title in 2020. This would be Hearn’s chance to back up his talk by putting the unbeaten 2016 Olympian Buatsi (12-0, 10 KOs) in with Bivol to show that he’s as good as he says he is. If not, then obviously Hearn has been going overboard in praising Buatsi.

The way that Hearn talks glowingly about Buatsi, one would assume that he can beat every light heavyweight in the division. Bivol shouldn’t be a problem if Buatsi is as good as Hearn says he is.

Of course, if Hearn has just been flapping his gums to make the casual boxing fans believe Buatsi is better than he actually is, then by all means he should keep him far, far away from a talent like Bivol.

Having seen Buatsi fight many times, Gilfoid thinks it would be a massacre if Hearn made the mistake of putting him in with Bivol. 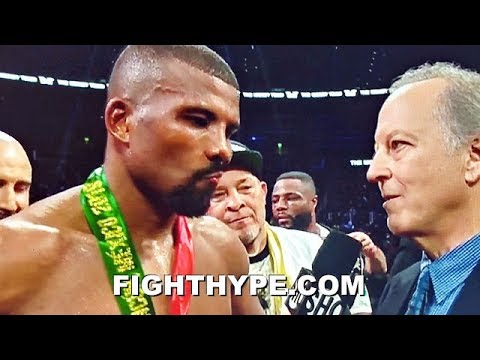 Terence Crawford found someone to help him call out PBC welterweights »