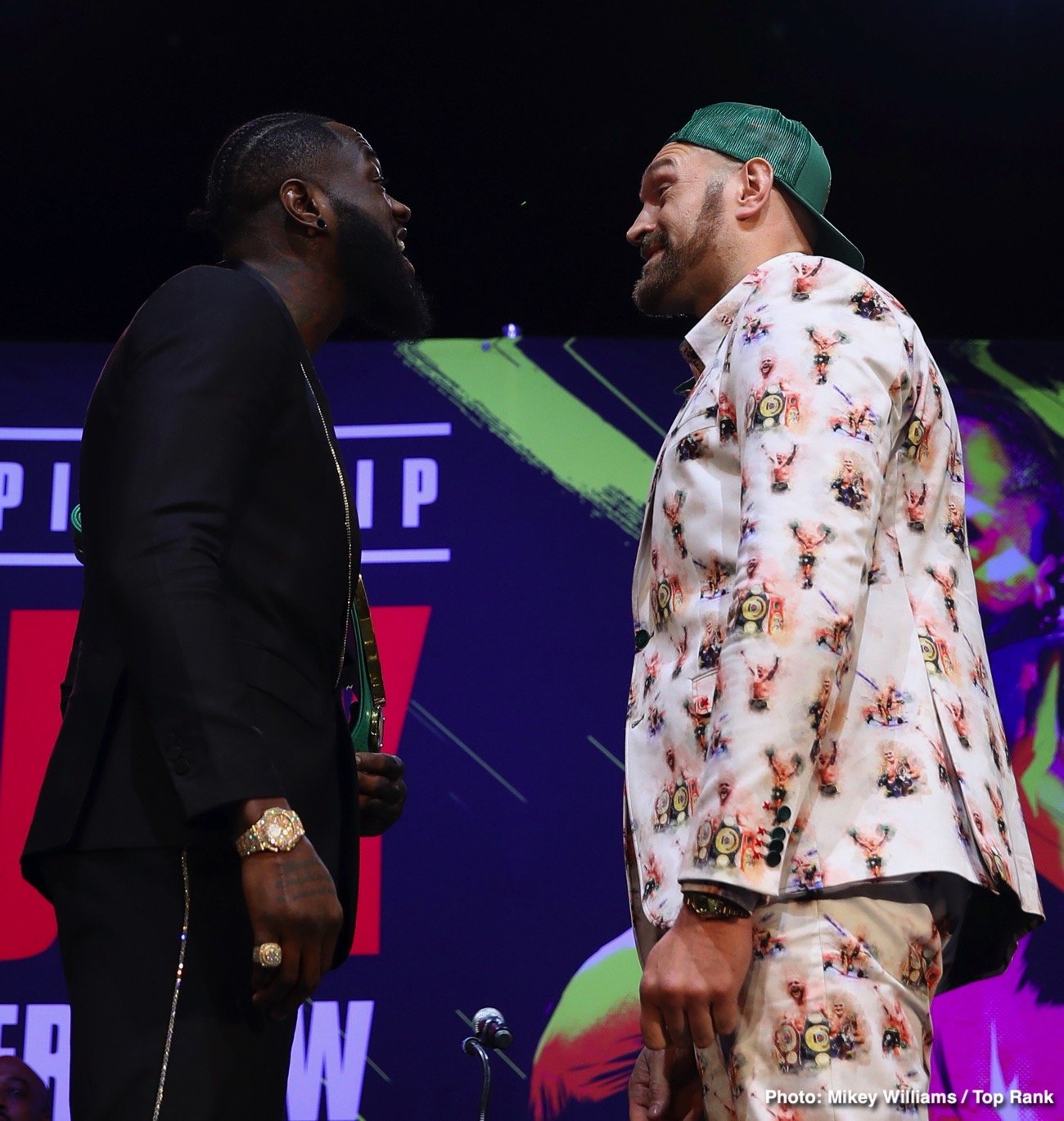 Unbeaten WBC Heavyweight World Champion Deontay “The Bronze Bomber” Wilder and undefeated lineal champion Tyson “The Gypsy King” Fury continued their war of words and previewed their much anticipated rematch at a Los Angeles press conference on Monday before they square off Saturday, February 22 in a historic, joint FOX Sports PPV & ESPN+ PPV from the MGM Grand Garden Arena in Las Vegas.

Wilder vs. Fury II will come 14 months after their thrilling first fight that saw Wilder retain the title via split draw, after Fury miraculously rose from a 12th round knockdown to finish the fight. It is one of the most memorable moments in recent heavyweight history, and on February 22 the two undefeated titans will take their war of words back into the ring to stake their claim as the best heavyweight in the world.

The charismatic stars put their magnetic personalities on display at the press conference, each laying claim to a rightful victory in their first contest, while also declaring their intent on finishing the rematch with an emphatic knockout victory. Here is what the press conference participants had to say Monday from The Novo by Microsoft at L.A. Live:

“It’s great to be back for another big event. This is the biggest title fight of this era for sure and I can’t wait. I’m always in my element. I’m always in the zone. Right now I just can’t wait for February 22.

“My body feels like its walking into the sixth week of camp instead of the third week. It’s been amazing to have the quick turnaround after the Ortiz fight in November. I’m coming in shape. I put shape on top of shape and it’s allowed me to prepare even harder for Fury.

“We all know in rematches I’m always sharp because I’ve been in there before and I know what my opponent is capable of doing and what they plan on doing. I’m prepared more than ever for this fight.

“I knocked him out the first time we fought. I told him two years ago I was going to baptize him. Rising up is part of the baptism. But this a different story. This is unfinished business. Because he’s in WWE I’m going to make sure he gets knocked out of the ring, I might even come down with a flying elbow from the top rope.

“Fury not wanting the rematch me immediately definitely made this fight bigger. We had two warmups. I had a lot more dangerous road than he had though. He played it safe, while I went to the mountain top and climbed it. I’m building for my legacy.

WILDER: Why is Fury changing trainers?

“If he beat me, then why all the new trainers? Every day it changes. Firing and hiring. He wants to talk about being out of shape the first time, but he was in great shape. He spent 100,000 pounds on all those camps. I still to this day have the same people with me and I don’t need to change it.

“When you’re facing power there’s no way around it. You can’t prepare for that. You just have to hope that when it lands, it doesn’t do that much damage. He doesn’t even know how he got on the ground or how he got up in the first fight. He’s been dealing with feeling ever since the end of the first fight.

“I’m going to do exactly what I said I would do. And I’m going to knock him out. I’m the lion. And I’m the king of the jungle. I’m going to rip his head off his body. Everyone sit tight and buckle up. It’s going to be a fun ride on the way to giving everyone the best fight you’ve seen in your lives.

“This is a major fight for the public and everyone should be excited. It doesn’t’ get any better than this. Two giants and two champions, putting it all on the line for everyone’s entertainment. We’re leaving it all in the ring to see who is the king.

“There’s so many things that go through my head as I take my time to adjust and time my opponent’s movements. I’m building the data I need to set him up for that perfect punch. There’s a lot of things that come with skills. Not just the average fundamentals. There are a lot of different things and that’s what makes boxing what it is. My ring IQ is very high and that’s how I set them up. I know everything he wants to do. He gave me 100% of him already.

“He believes in his heart that he’ll knock me out. I always teach people to speak it, believe it and receive it. The magic of it all is in the belief. Though he’s saying those things, I don’t feel in his energy that he believes that. I feel like he’s nervous because of what happened the first time.

“I just learned from the first fight that I need to be calmer. I’m going to be a lot more patient in this fight, just like in the second Luis Ortiz fight. The object of boxing is to win, not just to win rounds. And I win in devastating fashion.”

“The consensus is either he knocks me out, or I win on points. Usually when people have that opinion, it goes the opposite way around. Expect him to box and me to be looking for the knockout.

“He thinks I’m going to come out herky-jerky with my famous style, but I want him to meet me in the center of the ring and have a slugfest, best man wins. I didn’t have the gas to finish him in the last fight, but this time I can turn that screwdriver until he’s gone. Let’s make it a Marvin Hagler vs. Tommy Hearns type of fight. I’ll meet you Inthe middle of the ring on February 22. Just watch out for the right hand, because you’re going to sleep in two rounds.

“We finally have the rematch and I can’t remember a bigger heavyweight fight in a long time. Maybe Lennox Lewis vs. Mike Tyson was the last big one like this and that was another U.S. vs. U.K. showdown.

“Deontay Wilder hasn’t been returning my calls or messages since I beat him last time. He’s trying to keep his distance. He didn’t want to be around me so I can get in his head. But I don’t think you can really get in anyone’s head. At the end of the end of the day, it’s just talk. It doesn’t really matter what we say. It matters what happens on February 22.

“What’s going to happen in this fight is that I’m going to get what I rightfully won last time. I’m going to get the green belt and keep my lineal title. And if he wants to rematch me after, I’ll beat him again. I’ve already beat him once, and I know I can beat him three times in a row.

“I’m going to win, that’s what I do. Deontay Wilder can make all the excuses he wants to make. Everyone on his team can tell him he won that fight, but as a fighting man, you know when you win and lose a fight. I’m going to go out there give him a boxing lesson and knock him out.

“You’re never a finished article, you can always improve. I like to keep freshening things up every now and again. and I don’t make excuses. I won fair and square and we get to do it again. I’m ready for a fight today.

“He’s going to try to and the right hand. If I’m stupid enough to get hit with it, I deserve to lose. I hit the floor twice in the first fight, but it’s all about how you respond, I’m a fighting man. If he can’t finish me, I’m going to eat him up.

“When I get him in there again, I’m going to make him feel the fury. I’ve never been as sure of anything in my whole life. As sure as I was this morning putting this suit on. 100 percent he can’t win He’s got a puncher’s chance like anyone else. I’m much sharper and more fit now. I’m ready to rumble right now. I hope he train hard and goes to bed sleeping thinking about me.”

“On February 22, at the MGM Grand Garden Arena, it’s going to be bombs away. We have two superstars here. The best two heavyweights in the world. Both fighters are going to show a lot of passion at this press conference and all the way leading up to this fight because there is so much at stake.

“These are the best in boxing. There is nothing like a big heavyweight championship fight. We have the undefeated hardest punching, the most feared heavyweight in the world and I believe one of the all-time great heavyweights in Deontay Wilder.

“There is a reason Fury and his team didn’t want the immediate rematch right after the first fight. He’s taken a couple of tune-up fights instead because he felt that power on December 1. That’s not going to change this time, he can just ask Luis Ortiz.

I was lucky enough to promote the first fight and I believe we have something special in this rematch. I look forward to a fantastic fight on February 22 and we’ll see everyone there.”

“We talk about boxing having a renaissance, but it’s really about the heavyweight division. That’s what is going to create that renaissance more than anything right now.

“Tyson is so true, so gritty and he backs it up with everything he does. When you combine it with Deontay Wilder, you have two great personalities. This is really the beginning of the next super heavyweight run for the sport of boxing.”

“This fight here is one of those fights that you don’t want to miss. The first one was one not to miss as well and I’m sure you all watched the replay. You have two great champions here going at each other. Both fighters left the ring still undefeated last time and still wanting to settle the store. On February 22, the score will be settled.

“The heavyweight division is still the biggest and most powerful division in boxing. It always will be. Everyone wants to see the fighters throwing the big blows. Wilder is one of the hardest hitters in history and Tyson is one of the best boxers. I’m happy to be training. with Tyson Fury. It’s been about 10 years since we trained together. He trained with me and Emanuel Steward and I’m here to complete what Emmanuel started.”